The Prime Minister-designate, Saad Hariri, announced the rejection of what he called the "constitutional breach" committed by the judicial investigation judge, Fadi Sawan, for alleging against the caretaker prime minister, Hassan Diab, in the case of the Beirut port explosion. Prime Minister Hariri's statements came after his visit to Prime Minister Diab. In the Serail 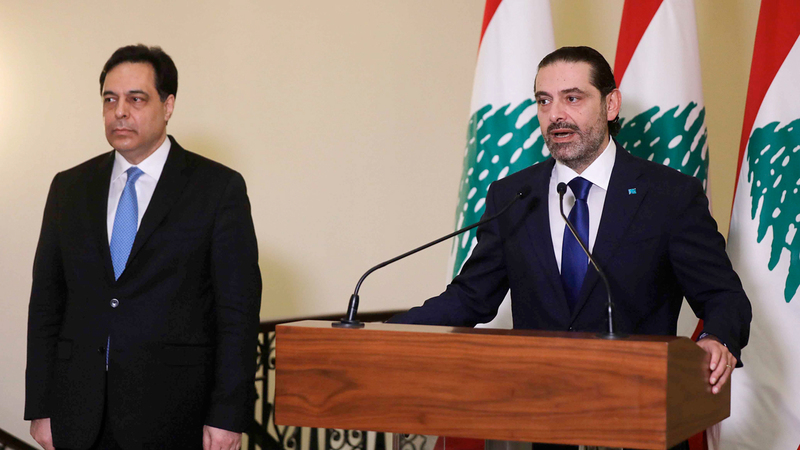 Hariri during a press conference after his visit to Diab at the Grand Serail.

The Prime Minister-designate, Saad Hariri, announced the rejection of what he called "the constitutional breach", which was committed by the judicial investigation judge, Fadi Sawan, by prosecuting the head of the caretaker government, Hassan Diab, in the case of the Beirut port explosion.

After the meeting, Prime Minister Hariri said: "I came to prime minister to express my absolute rejection of the clear and flagrant constitutional violation that the judge committed by prosecuting the prime minister."

He added, "The constitution is clear, and heads of government are only represented before a special court, to be formed by the Parliament."

Hariri added: "The premiership is not to blackmail the other, and this matter is unacceptable, and we will not accept it."

He said, “The families of the martyrs have the right to know the truth. It is their right to know who brought this ship and who covered it.

As for violating the constitution and claiming to be prime minister, this is unacceptable, and I came to stand with the prime minister and show solidarity with him.

Earlier, in a statement yesterday, Hezbollah considered that the recent measures taken by the Lebanese judicial investigator in the case of the Beirut Port bombing, Judge Fadi Sawan, were political targeting of people and ignored others, and called on him to adopt unified standards.

Hezbollah’s statement came as a comment on the judicial investigation judge’s decision on the Beirut Port bombing, the prosecution against the caretaker prime minister, Hassan Diab, and three former ministers.

In its statement, the party said, "We confirm our keenness to ensure that all measures taken by the investigating judge are far from politics and purpose, in conformity with the provisions of the constitution, and are not subject to jurisprudence, interpretation or interpretation, and that the prosecution is made on logical and legal grounds."