Bought two different puppies - both had to be killed

Dog smuggling increases when more and more people want to buy a dog. Many of the smuggled puppies are sold on Blocket. See the story of two different families who each bought a puppy that had to be killed after only a few days in their new home. 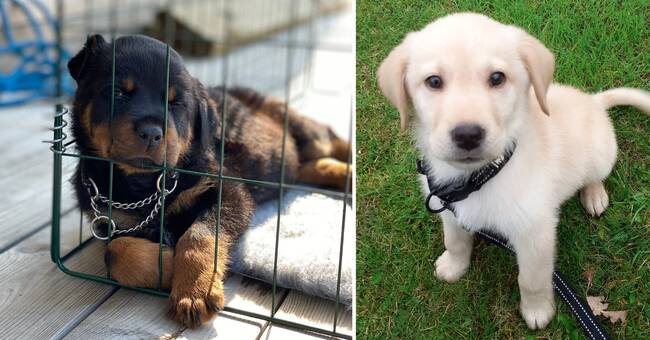 The Rottweiler puppy Boss was bought by a family in Mellanskåne in mid-October.

The Labrador puppy Yoggi was bought by an overjoyed family with three children in Malmö a few weeks later.

Both dog purchases began in joy but ended in grief.

- These reporters have had a very typical experience of what it can be like to buy a smuggled puppy.

They have bought the dogs outdoors, there has been a bitch on site that the buyers have thought was the mother, says Sonia Ögren Kull, animal welfare inspector at the county administrative board.

The families bought a puppy that looked healthy and that the sellers had paper on.

But after a few days, the puppies became ill and in connection with that, the buyers understand that they may have bought a smuggled dog.

Yogi was taken to the animal hospital in Malmö Photo: Private

At the county administrative board's animal welfare unit, they notice that more smuggling dogs are entering the country.

The number of reports has increased during the pandemic when more and more people want to get a dog.

But there are risks.

Both Boss and Yoggi were bought at Blocket with completely fresh certificates that they were healthy without remarks.

But both puppies ate poorly, vomited and had loose stools when they came home to their families.

The puppies were taken to an animal hospital after nine days with their families.

- It is not at all as easy as buyers today to know what is a Swedish dog and what is a smuggled dog, says Sonia Ögren Kull.

She believes that Swedish dog breeding cannot meet demand, which has made it easy for smugglers to make big money on puppies.

Boss and Yoggi were killed

Both Boss and Yoggi were killed after a night in hospital.

The cause of death has not been determined but both puppies may have had a virus that could not be cured.

The animal insurance that the family took out for Yoggi did not apply, so the veterinary cost ended up at SEK 55,000 plus the 16,000 they paid for the dog.

- This is difficult to investigate but most likely Boss and Yoggi were smuggled dogs, says Sonia Ögren Kull.

According to the animal hospital, Boss was very small for his age.

She says that puppies are raised in factories where the bitch is kept in cages and forcibly mated in order to produce as many puppies as possible.

Then the puppies are taken from the bitches too early so that they have time to be sold when they are still small and cute.

As far as Boss is concerned, the county administrative board has closed the case due to a lack of resources and the fact that the animal welfare inspectors are not allowed to raid suspected sellers' homes due to the pandemic.

The case concerning Yoggi is still being investigated, but the police have closed the preliminary investigation because "it is not possible to prove that the sellers have committed a crime".