Is this the solution to the Finnish pension bomb? Pension institutions are offered permission to lend money for investments - “It would be an idea to use a leverage lever”

Financial professionals are warming up to the policy insider bill, employment pension companies are afraid of risks. 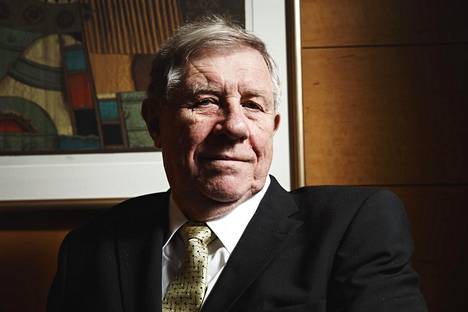 The government’s plan to remove the pension tube speaks volumes.

Politicians have enough of a headache about how society will cope with pension contribution challenges in the future.

The pressure has increased.

Now, a few politicians and economic influences interviewed by Taloussanomat, led by veteran politician Eero Lehti (Kok), are putting a tough proposal on the counter, which they say could significantly reduce the payment burden for employers and employees - specifically by investing in investment returns.

- An amendment to the law should be introduced to allow pension companies to apply for almost zero-year loans from the market for more than 20 years.

These loans would then be invested in a decentralized manner in the financial markets - for example, in a global stock index with an average annual return of about eight percent, Lehti suggests.

- The risks in long-term and low-interest loan investments would be marginal.

There would be talk of several billion additional revenues for pension companies on an annual basis, as a result of which the upward pressure on pension contributions would ease.

It would be so significantly facilitated that the position of wage earners and entrepreneurs would improve dramatically in one fell swoop, the former long-term MP believes.

According to Eero Lehti, debt leverage could solve the sustainability problem of the pension system. Photo: Roni Rekomaa

The proposal to introduce leverage is not entirely new, as there has been a political debate on the subject in recent years.

And, in fact, in recent years, occupational pension companies have already been allowed to use leverage in their housing investments in subsidiaries under the Emergency Act.

The law came into force at the beginning of 2015 and will allow, at least until the end of 2022, that a maximum of 50 percent of the financial investment in new rental housing investment projects can be covered with loan money.

- When the debt lever was talked about in its time, the world was different in many ways than it is today.

I don't see the point in the fact that pension companies can invest in listed shares, but at the same time are not allowed to take out an extremely cheap loan from the market, Lehti explains.

- The ability of pension companies to bear loan risk has improved significantly.

I would also point out that it would be possible to apply for interest rate protection on these loans, and even then the annual interest rate could be less than 1%.

Etla and the Finnish Center for Pensions support

The activities of employment pension companies as executors of statutory social insurance and as custodians of earnings-related pension funds are regulated by precise regulations.

According to the proponents of the new idea, pension companies should be brought in line with the state, which is already able to apply for the said near-zero-interest loan if it so wishes.

In November, Eero Lehti proposed first in Kauppalehti and then in Ilta-Sanomat that the entire government debt should be doubled and invested in shares.

Then a return of one billion on the stock market would correspond to the interest cost of three billion in debt, the magazine still believes.

- Now state pensions are covered directly from the state budget.

It would definitely be worthwhile for the state to apply for a billion-dollar loan from the market for new capital in the pension fund.

But what do money market experts think about the pension issue?

In the financial sector, the general opinion seems to be that the risk of low-interest loans, for example on a ten-year horizon, is low, and there is virtually no fear of losing capital over a twenty-year period.

According to Aki Kangasharju, CEO of the Finnish Business Research Institute (Etla), the risks of using leverage, for example, have “decreased significantly with the changing world”.

- I consider it a dead-born idea that the state would take significantly more debt and invest it forward.

A beautiful idea, but in the political system, logically, it goes so that the money would be used for completely different purposes and government spending would only increase, Kangasharju says.

- But in a pension system, using leverage would probably make sense.

Precisely if loans and investments were to be put behind a firewall, making them far further away from politicians.

I believe that by law, such a wall of protection for pensions could be built.

Jaakko Kiander, Director of Research, Statistics and Planning at the Finnish Center for Pensions, will also support the use of leverage in the pension system.

- There is, of course, an idea in the proposal.

Even in pension funding, the inevitable logic is that if you get a return on your investment of more than zero percent, it gets rich, Kiander sees.

- There are always risks in investments, but they can be managed in long-term, diversified investments.

It would be appropriate to make greater use of the possibility of leverage.

It could probably improve the investment returns of pension companies and reduce the pension expenditure for which the state is responsible.

In addition, there are already other investment instruments that are more or less prone to the idea of ​​leverage - especially stock exchanges.

Thus, occupational pension companies are also investors in listed shares, and the listed company specifically leverages the assets and return expectations of the owners who have invested their equity in the company when the company's operations are financed with debt in addition to equity.

In any case, occupational pension companies seem to be quite skeptical about the new debt leverage proposal.

- The use of leverage in the investment portfolio does not really fit into our earnings-related pension system, it brings a new additional risk to manage.

Although interest rates are now at record lows and inflation is also, and this seems to be continuing in the near future, there are no guarantees of development in the long run, Varma's chief economist Katja Bjerstedt explains.

If such borrowing were to be allowed, one would have to be prepared for the new risks it poses, in practice, for example, by increasing equity, ie by increasing various buffers.

Then the risks would be related to securing liquidity.

Katja Veirto, Elo's Director of Public Relations, points out that the sustainability of the employment pension system is affected by many factors, such as economic growth, employment, investment income and demographic development.

- There are always many uncertainties known, and negative trends related to demographics, for example.

Increasing pension assets with leverage raises questions about the security of funds, transparency and the relationship with public finances, Veirto points out.

- The survivor's pension reform is coming into force, and with it, widows' pensions for the younger generations are becoming fixed-term.

However, at the same time, the reform will improve the position of unmarried partners and extend the duration of orphan's pensions.

The reform will have a small easing effect on the long-term financial perspective of the pension system.

Timo Kietäväinen, CEO of Keva, Finland's largest employment pension insurer, says that he has been thinking about the proposed model for a long time.

- The idea of ​​solving economic problems by additional borrowing and investing loan money in the stock market is not new.

A thorough risk assessment should be carried out before taking the action now proposed.

Only then should decisions be made, Kietäväinen says.