In conjunction with the 49th National Day of the country yesterday, the satellite "Falcon Eye" was successfully launched into space from the French station "Guyana", located on the northern coast of South America under French sovereignty, by the Russian "Soyuz" missile, at exactly 5:33 pm Morning 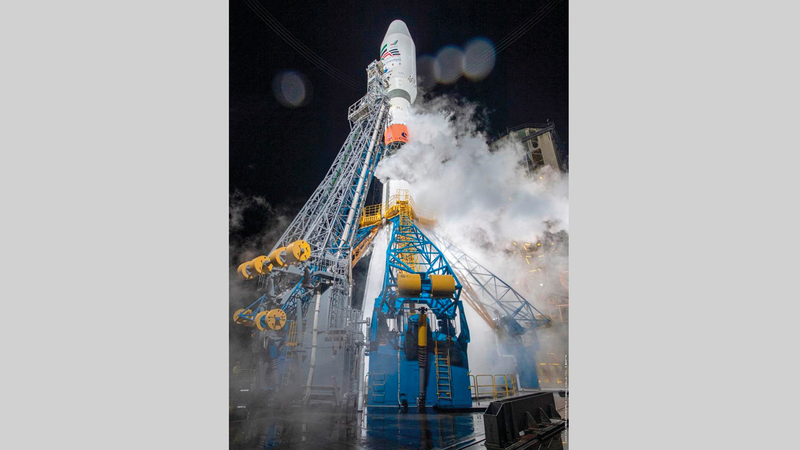 Coinciding with the 49th National Day

In conjunction with the 49th National Day of the country yesterday, the satellite "Falcon Eye" was successfully launched into space from the French station "Guyana", located on the northern coast of South America under French sovereignty, by the Russian "Soyuz" missile, at exactly 5:33 pm Morning UAE time «01:33 GMT».

With the launch of "Eye of the Falcon", the UAE is recording a new qualitative achievement that strengthens its position as a center for advanced satellites, as this satellite will become the fourth for monitoring purposes owned by the state, bringing the number of state satellites to 12, in addition to a number of small cubic satellites for educational and research purposes. And development in the fields of space technology.

The first three stages of the launch took eight minutes and 48 seconds, and were carried out by burning engines with fuel, and the fourth stage was done by the upper altitude and directional unit (FREGAT), to direct the moon to its sun-synchronous low orbit, and the moon was separated from the missile after 58 minutes of launch .

The "Eye of the Falcon" satellite passed through several stages until it reached the launch stage, as it took five years to manufacture. The project was implemented by an Emirati team that includes high national expertise and competencies from the armed forces in the field of managing mega projects and engineering military and space systems. National and foreign experts and technicians have been integrated. In the field of space manufacturing with a group of young Emirati engineers.

The project team began working with manufacturers in designing, developing and manufacturing the system and following up on the project's agenda during their presence in the French installations in the cities of Toulouse and Cannes, and began with the design phase of the moon by developing the available technology and analyzing the comprehensive performance of the designed system, and then manufacturing the devices and parts of the moon with the required specifications, and making sure From its readiness to be installed and merged to build the final satellite, to subjecting the integrated satellite to severe and comprehensive tests to qualify it for the harsh space environment, to ensure that it can withstand the launch process, and to ensure the functioning and health of all satellite systems.

It was then transferred from the French city of Toulouse to the French city of Guiana on the first of last February, where, since the arrival of the satellite, the technical team of the United Arab Emirates began preparing it for launch by conducting a series of tests at the launch site, which included the phase of tests of the suitability of the moon on the moon carrier, And the phase of the moon’s safety tests and the phase of supplying it with hydrazine fuel, the phase of joint work between the moon and the missile, the phase of packing the moon with the payload cover, the phase of integrating the moon on the missile, and the final readiness phase for launch, while the work stopped from March to last October due to the Corona pandemic and the unfavorable weather conditions for its launch.

This new achievement adds to the UAE’s expertise in the field of satellites, as it had a lead years ago in launching the Yahsat project, which is the first project of its kind that serves the military and civil sectors through its satellites in the Middle East region, as it focuses on transferring knowledge and experience. Space, in addition to purchasing and manufacturing systems.

The success of the UAE in the field of satellites enhances its competitiveness on the map of developed countries, after the possession of space programs and the ability to engage in the field of manufacturing satellites became the most important indicators for measuring the strength of countries and their knowledge and technical development in our contemporary world.

The UAE has been able to consolidate its position among the major countries in the field of space science, since the establishment of the UAE Space Agency in mid-2014, and its achievements do not stop, because it has great ambitions and hopes that have no limits, and is proceeding with confident and steady steps towards achieving its goals.

The Undersecretary of the Ministry of Defense, Mattar Salem Ali Al Dhaheri, confirmed that the UAE’s success in launching the satellite “Eye of the Falcon” into its orbit from the French station “Guyana” located on the northern coast of South America is a unique achievement, because it proves that the UAE possesses all the capabilities and capabilities that Make her an inspiring model for creating hope for others.

In a statement on the occasion of the launch of the satellite, he said that “The Falcon's Eye” is an embodiment of the will to excel that characterizes the UAE, which with the wisdom of our leadership was able to engage in the specific areas that were previously the preserve of developed countries, such as the field of space and satellites, and enhance its contributions in the service of Human civilization.

He added that what causes us to be proud of this great national achievement is not only the great importance of the Falcon Eye in the civil and military fields, but also has unique characteristics, as it has a mobile station capable of sending and receiving pictures from any region in the world, and it will be used. Its images are in various fields, such as mapping, urban planning, prevention and management of natural disasters, and providing high-resolution images and maps, and among its advantages is that those in charge of managing this satellite are among the nation's citizens who now possess the specific knowledge and skills in this delicate field.

Al Dhaheri emphasized that “Eye of the Falcon” will enhance the UAE’s accumulated experience in the field of satellites, especially as it comes after a series of successes in this field, as it had a lead years ago in launching the Yahsat project, which was the first model of its kind serving the two sectors. It has entered the era of complete space industrialization with the launch of "Khalifa Sat" last October, and is continuing its preparations from now for the arrival of the first Emirati probe (the Hope Probe) to Mars in the year 2021, which coincides with the state's celebrations of its golden jubilee. To be the best celebration of this precious occasion for all of the nation.

He pointed out that the UAE's continuous achievements in the field of space and satellites confirm that it has an ambition that has no ceiling except for the sky, and that it is able to be among the adults in this field within the next few years.

For his part, the Chairman of the Supreme Committee of the Falcon Eye Project, Lieutenant General Dr. Khalifa Thani Al-Rumaithi, said that the Emirates Space Project confirms the excellence of the development and development experience in the UAE, which is always moving forward with new ambitions and great goals, and engages in specific areas that enrich its development experience.

He added: “The launch of the satellite (Al Yah-3) came in early 2018, to prove the confidence and ability of the UAE in its continuous progress in the field of space systems, through which it began expanding into purely commercial space missions and introducing its advanced products to global markets. ) In October 2018 to inaugurate the UAE's entry into the era of complete space industrialization, especially since the satellite manufacturing team are all young citizens of the country between the ages of 27 and 28 years, which confirms that the state possesses all the human, knowledge and technical capabilities that make it a model to be followed in developing The space sector, especially as it has made advanced stages on the way to the arrival of the first Emirati probe (the Hope Probe) to Mars in the year 2021, which coincides with the UAE celebrations of the golden jubilee of its founding, to be the best celebration of this precious anniversary.

He added that «the most important characteristic of the UAE space programs is that it places the Arabs firmly on the map of the space industry with qualitative projects that have surpassed what the world has accomplished in this field to new horizons through which they provide positive and influential additions that enhance their contributions to the process of civilized and human progress, and there is no doubt that the experience The UAE in the field of satellites qualifies it for that. The satellite (Falcon Eye) represents a qualitative achievement that strengthens the UAE’s position as a leading and globally recognized center in the field of remote sensing, technical innovation, and geospatial applications.

The Falcon Eye is designed to provide global coverage for the next 10 years. It is equipped with a high-definition and accurate imaging system. Once it enters its low orbit around the Earth, it will start the process of capturing satellite images of the Earth and sending them to the ground control station.

The moon's orbit is also distinguished by that it completes 15 rounds on the earth on a daily basis, and images will be received directly on the earth station of the Space Reconnaissance Center through polar stations that contribute to the speed of arrival of the images.

From any region in the world, moon images will be used in the areas of:

Prevention and management of natural disasters.

Monitor changes in the environment and desertification.

Providing pictures and maps that help the armed forces achieve their tasks efficiently.

- “(Falcon's Eye) is an embodiment of the will to excel that characterizes the UAE.”

- "The state possesses all the ingredients to make it a role model in developing the space sector."