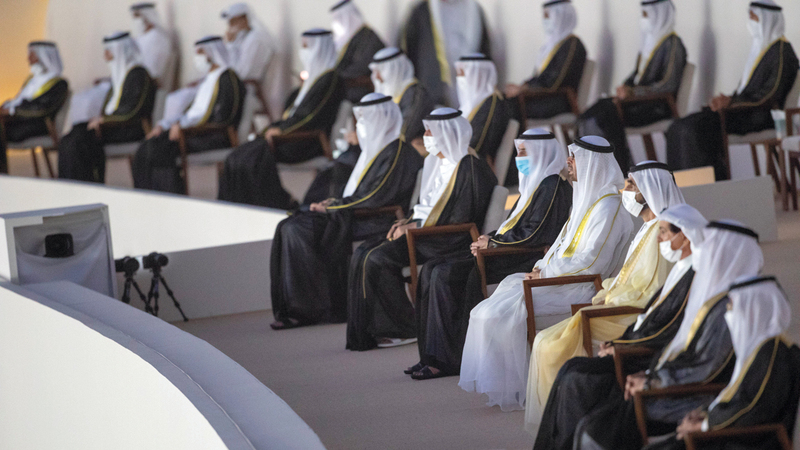 His Highness Sheikh Mohammed bin Rashid Al Maktoum said in a tweet on “Twitter” yesterday: “My brothers, the rulers of the Emirates, witnessed the celebration of the 49th National Day in Abu Dhabi ... a distinguished celebration that reflected our pride in our national march over the past 49 years of the federation .. Thanks to Sheikha Maryam bint Mohammed bin Zayed. For its unique creations every year ».

His Highness Sheikh Mohammed bin Zayed Al Nahyan also published a tweet on Twitter, in which His Highness said: “My brothers, the rulers of the Emirates, witnessed the official celebration of the 49th National Day under the slogan of planting the union ... cultural, humanitarian and economic achievements that embodied the founders' instillation, may God have mercy on them ... our joy. "This is a big day .. With God's help, our country will always remain in glory, goodness, safety and progress."

Their Highnesses Sheikhs, members of the Supreme Council, Rulers of the Emirates, and His Highness, the Crown Prince, Deputy Rulers and Sheikhs, raised their highest congratulations and wishes to the Leader of the Blessed Good March, His Highness Sheikh Khalifa bin Zayed Al Nahyan, President of the State, on the occasion of the 49th National Day of the UAE, expressing their pride and pride in what it has achieved The UAE is one of the qualitative achievements that made it enjoy an advanced position among the countries of the world, thanks to his wise leadership and his sound approach to everything that is good for the country and its progress, and to meet the aspirations and happiness of its people. Experienced by the state.

The idea to celebrate this year came in the form of a unique moving and luminous sculpture floating on the sea surface at a height of 15 meters, lit with digital images and the effects of fireworks and paragliders.

The title of the presentation, “Planting the Union”, embodied the vision of the late founder Sheikh Zayed bin Sultan Al Nahyan, may God have mercy on him, and his principles and values ​​that formed the basis for the federation of the UAE.

The presentation represented the stages of the development of the UAE since its establishment on the second of December 1971, while shedding light on its progression over a period of 49 years.

The presentation also dealt with the principles and values ​​that have been a torch with which the state was enlightened since its inception, which are: wisdom, optimism, fortitude, determination, union, ambition and unity.

The details of the presentation included paragraphs that shed light on the role of the founding fathers of the state and the efforts of the workers in the first line of defense, and their sacrifices in order to preserve the safety of members of society during the period of the "Covid-19" pandemic.

Community members, citizens and residents, also participated in the official celebration through recorded videos of participants of various nationalities while performing the national anthem of the United Arab Emirates. The clips were shown during the ceremony in the form of a collective performance, as the celebration organizing committee launched the 'Live My Country' campaign in Last November 23, during which the public was invited to participate in recordings of them while they were performing the national anthem.

The creative presentation was designed by a team of experienced Emiratis in cooperation with international artistic director S Devlin, who had previously participated in the design of several international shows, in which music was combined with language and light, while the organizers sought through the unique artistic show that was held in the mangrove area. On the island of Jubail in Abu Dhabi to send a message of hope and optimism to all of humanity.

Against a luminous background that reflects the skyline of Abu Dhabi, this year’s celebration focuses on a unique and moving sculpture that floats on the surface of the sea, in the form of a cube bearing the name “Planting the Union,” 15 meters high (equivalent to a five-story building). The cube reveals four Designs engraved on each side, are the seed, bud, flower, and seed spread.

One of S Devlin's most distinctive work is the revolving cube, as she has used it in a variety of contexts, locations, and scales.

From desert to loneliness

In the first scene, titled “Dream of the Desert,” the cube lit up with a scene of desert sand accompanied by the narrator’s voice, who began explaining the scene in a poetic way. Then a boy appeared carrying a smaller version of the sculpture that he planted with a seed indicating the emergence of the union.

And on the larger sculpture, a display of the seed appeared as it beats with life, turning into a bud, then into a flower, and finally its seeds scattered everywhere.

The scene featured fireworks, in addition to a performance by a team of performing artists in Emirati national costume.

The second scene under the title “Planting the Union” dealt with the stages of the development of the UAE federation, as the performing artists gathered around the sculpture at the moment when the names of the seven Emirates began to light up, accompanied by pictures of the founding fathers who founded the federation in 1971, and the seven main values ​​presented by the narrator.

In the third scene, which was called "the national anthem", video clips of people from all walks of life were shown performing the national anthem of the UAE, "in a virtual collective choral performance", all of which gradually turned to paint the UAE flag on the sculpture.

These coordinated recordings included contributions from community members that were shared with the organizing committee after the launch of the 'Live My Country' campaign.

The fourth scene held the title “Our Leadership”, which focused on the strength of the union and its established values ​​under the wise leadership of His Highness Sheikh Khalifa bin Zayed Al Nahyan, and his brothers, the Sheikhs, the rulers of the Emirates, who inspire the community with their words and deeds, affirming the originality of the history of the UAE and the strength of the union that is rooted in the ambition The sons of the Emirates and their determination, in addition to the role that everyone has to elevate their position.

As for the fifth scene, it was titled “The Pride of the Fatherland”, and it showed testimonies in several languages ​​of seven individuals who represent the first line of defense, who sacrificed themselves for the sake of community safety during the “Covid-19” pandemic.

The portrait of each hero in the first line of defense was displayed on the sculpture as if it were carved in stone, to express the strength that they derived from the values ​​of the UAE, and represent the sacrifices made by these people and the experiences of thousands of health care workers, emergency personnel and essential service providers, who have made dearly. And valuable, and they showed an unparalleled heroism in order to preserve the safety and security of the UAE community.

The sixth scene was titled "Everything is Possible" and reviewed the achievements of four Emiratis whose childhood dreams had turned into a tangible reality, in addition to presenting an inspiring speech to the late Sheikh Zayed bin Sultan Al Nahyan on the importance of the role of youth in building the state. Then the scene reviewed the aspirations of each of: Hazaa Al-Mansoori, the first Emirati astronaut, Sarah Al-Amiri, the team leader of the Emirates Mission to explore Mars «Probe of Hope», Dr. Fatima Al-Kaabi, pioneer of stem cell therapy for patients «Covid-19», and Sheikha Al Qasimi, a martial arts player with Down syndrome, who carried The Flame of Hope at the Special Olympics World Games «Abu Dhabi 2019».

The seventh scene under the title "The Legacy of Unity" focused on solidarity across religions, drawing on his inspiration from the late Sheikh Zayed, who had promoted the values ​​of tolerance, peaceful coexistence and cooperation between different peoples and cultures.

And reflected on the sculpture are pictures that tell the UAE's completion of this march by establishing the "Abrahamic Family House" on Saadiyat Island in Abu Dhabi.

As the presentation drew to a close, and in the closing scene, the presentation included a glimpse of the most important achievements of the Emirati cranes to foresee a promising future in which the UAE would occupy a global leader in various fields, including medical research, environmental sustainability and renewable energy.

Senior officials and frontline representatives in the face of "Corona".