The total contribution of Finnish men in cross-country skiing was the most positive gift of Ruka's opening weekend. 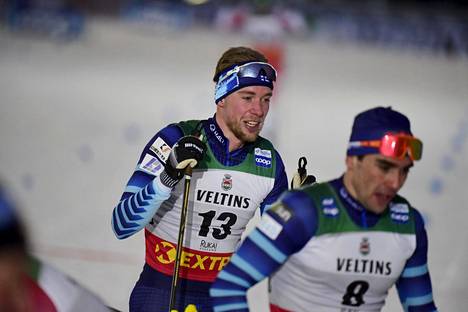 In the end, Finland did not achieve any podium placements during the Ruka race weekend.

Niskanen's siblings were responsible for the toughest performances in cross-country skiing: Iivo was Fifth in the 15-kilometer traditional and kept his position in free pursuit, Kerttu sixth and ninth.

Instead of individual cross-country skiing, attention was paid especially to the strong overall contribution of the men.

Ristomatti Hakola and Joni Mäki accompanied the sprint vigorously as a continuation of the sprint semi-finals both on Saturday and Sunday, even around the top ten.

Perttu Hyvärinen was on the next step in about 20th place in the terrain.

- Iivo is in very good condition, but not yet in the same result condition as a year ago at this time.

A great weekend from Hakola and Mäki, says IS ski expert Harri Kirvesniemi.

- The overall contribution of the men was absolutely positive.

Although the podium place did not come, I would rather accept such a total bet than that Iivo would have been on the ball even once.

The previous message medal for the Finnish men's events is from 2009. Now the situation seems that next spring's 12-year dry season at the World Championships in Oberstdorf may well end.

- Norway and Russia are in their own caste, but at the moment we definitely have the third best group of men.

Of the third toughest men's ski country, Finland's challengers are mainly Sweden and France, whose contribution was really weak at the opening weekend of the season.

To counterbalance the positive performances of the men, the level of Finnish women as a whole did not dizzy in Ruka.

The hot topic was the terrible collapse of Krista Pärmäkoski, which was number one for years, due to illness at the dawn of the season.

However, the bright spots fit in the crowd.

Especially Kerttu Niskanen, who now seems to be in his best stroke for years and knocking out the top spots.

- Another positive performer was Jasmi Joensuu.

The sprint would probably still have been his best trip, but there was a ski pick.

- Katri Lylynperä also gets reasonably clean papers, but as a whole, the women's team contribution was definitely bad, Kirvesniemi says.

Kerttu Niskanen is in a promising strike.

Otherwise it is quieter in women.Image: Magazine image

For example, Johanna Matintalo, Laura Mononen, Anne Kyllönen, Eveliina Piippo and Riitta-Liisa Roponen did not even get close to the level where they have been at their best.

Finland has fallen even further away from Sweden and Norway, which dominate women's skiing.

- Yes, you have to worry about that.

- It wasn't long before it seemed obvious that Finnish women were in the message of a good medal fight.

Actually, it has felt like it, even though there have been these very same women skiing as they do now.

Now we are quite far from it, Kirvesniemi says and adds that the overall situation will naturally improve if Pärmäkoski returns to its level.

It's especially gloomy in sprinting.

- Our sprint skiing should make a whole new generation grow.

These women, who focus mainly on normal trips, don’t really have the development potential for sprint success, even if they do well in domestic races.

- We should also dare to focus brutally on sprints and let the younger guard get experience, even if it seems that they do not deserve a place competitively, Kirvesniemi says.

When the Lillehammer Games scheduled for next weekend were canceled, the World Ski Cup is set to continue only two weeks later in Davos, Switzerland.