Maradona does not rest in peace, still many controversies

The prosecutor investigates doctors and nurses, presumed sonThe burial of Maradona Maradona died, football loses its star Maradona, daughter Dalma: "Dad, I'll always defend you" Osservatore Romano: Maradona was not a sportsman, he was a genius Share November 28, 2020 Maradona rests, but not in peace. Two days after the ceremony with which his remains were delivered to the land of the Bella Vista cemetery, on the outskirts of Buenos Aires, a red-hot 'afte 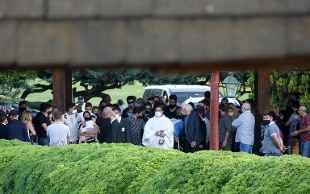 The burial of Maradona

Two days after the ceremony with which his remains were delivered to the land of the Bella Vista cemetery, on the outskirts of Buenos Aires, a red-hot 'after-Maradona' still holds court.

Magistrates, lawyers, authentic and presumed family members, inheritance specialists and people who have exploited the proximity to the corpse of the 'pibe de oro' to take selfies, continue to offer the media material to feed stories destined to dig, and ultimately to damage, the life of the famous deceased.

The lack of clarity on the behavior of Maradona's intimate circle in the hours leading up to his death, Wednesday at 12, continues to make headlines.

They range from personal doctor Leopoldo Luque who calls an ambulance and does not specify the name of the dying patient, to the nurse, Dahiana Gisela Madrid, who writes a version of what was happening and then claims that she was forced to do so. .

The prosecutors working on the case have not yet provided their official version or announced decisions, but they have collected material, including the fact that in the villa where Maradona was recovering there was no doctor or even a defibrillator.

Amazement aroused the gesture of an employee of the funeral home 'Pinier', Claudio Ismael Fernández, 48, who did not believe his eyes when he found himself with his son, Sebastián, aged 18, near the open coffin. and he couldn't resist taking a selfie that went viral on social media.

He repented, apologized, but was fired and charged with desecration of a corpse.

The question of the incipient battle for an inheritance that reasonably should be between 80 and 150 million dollars continues to be hot, including real estate, cars, jewels,

revenues in Argentina and in many countries of the world.

And it is not known among how many it will be divided.

In the front row there are four women: his wife

and daughters Dalma and Giannina,

with her daughter Jana Maradona, and

, with her son Diego Fernando Maradona.

But also two Cuban women, who would have given him three, and perhaps four children, for whom the recognition process is underway (Joana, Lu, Javielito and perhaps even Harold).

As if that weren't enough, another would-be son emerged today, Santiago Lara, 19, who asks for the exhumation of Diego's corpse in order to compare his DNA with him.

"I have no financial claims - he assured - but only to know if he is my father, as my mother who died of cancer said".

But there is also a side of good news: the owner of Aeropuertos Argentinos 2000 (AA2000), Eduardo Eurnekian, has announced that he is already working to fulfill a promise he made to the famous 'Diez' when he was still alive.

In December, in the hall of Ezeiza airport in Buenos Aires, a large 3D statue of Maradona will dominate.