Thursday's explosion took place on the main natural gas pipeline between Egypt and Israel, at a time when reports spoke of the ISIS claiming the attack. 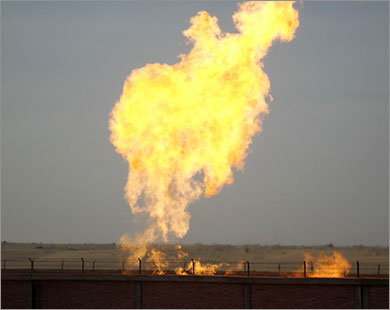 Thursday's explosion took place on the main natural gas pipeline between Egypt and Israel, at a time when reports spoke of the ISIS claiming the attack.

"There was a limited explosion of the gas pipeline in the Sabika area in the North Sinai Governorate in the northeast, without any injuries or losses," said Egyptian army spokesman Colonel Tamer Al-Rifai.

In a statement on his Facebook account, he added that an investigation is underway to determine the causes and circumstances of the accident, while the private local newspaper, Al-Shorouk, citing an unnamed source, stated that the fire broke out in the gas pipeline in the village of Al-Tulul, east of Bir Al-Abed, North Sinai Governorate.

The source confirmed that the Egyptian Natural Gas Company "GASCO" (governmental) dealt with the incident by securing the lines and closing the control valves to control the fire. He added that fire engines were pushed to the area and the international road parallel to the gas line was closed until insurance cars and fire trucks passed.

For its part, the Israeli newspaper, Yediot Aharonot, reported that the Sinai Province organization, the Egyptian branch of the Islamic State organization, announced its endorsement of the attack through its Telegram account.

In February 2011, a series of attacks began on the same gas pipeline, as it was subjected to over the course of about a year and a half to be blown up more than 27 times, which led Egypt to stop exporting natural gas to Israel.