There has been a strong wind in the county during the night and on Thursday morning. Several trees have fallen over and blocked roads in many places in Dalarna. 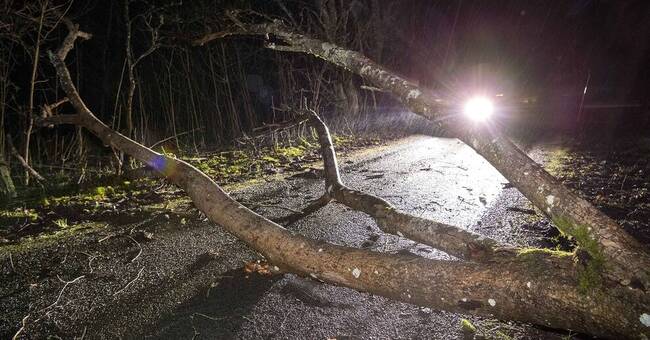 SOS Alarm received the first call at 10 pm about a tree that fell over the road between Ludvika and Gonäs.

There continued to be calls during the night and in the morning.

Among other things from Ludvika municipality, Säter and road 871 in Falu municipality, between Bergsgården and Österå where a large pine has ended up across the road.

- We have noticed that it blew all night.

The Swedish Transport Administration and we have had a lot to do, but right now all forces are on their way home, says Johan Nordin, internal commander of the Rescue Service Dala-Mitt to SVT at 7 o'clock on Thursday morning.

But at 07.18 an alarm came about another fallen tree, this time in Leksand municipality, in Hisvåla on road 929. The rescue service is on site and clears away the tree that ended up over one lane.

The road is passable for traffic in the second lane, according to the Bergslagen Rescue Region.

From Medväga in Borlänge, an alarm came in about a tree that had fallen over a house.

According to SOS Alarm, Riksbyggen and the tenant-owner association took care of the tree that fell over a house.

The rescue service did not have to go there and the tree posed no danger to the public.

SMHI has issued a class 1 warning for very strong winds throughout Dalarna, except in the mountains.

The warning applies during Thursday morning.

The stormy weather of the night also led to power outages in 443 places in the county.

According to Ellevio, it is expected to be fixed during the morning.

Have you been hit by the strong winds?

Feel free to send us a picture from the storm!

There has been a strong wind in the county during the night and on Thursday morning.

Several trees have fallen over and blocked roads in many places in Dalarna.

Staff on their way to a power outage in Älvdalen

It has blown really hard all night and led to power outages in several places.

Ellevio announces that 44 households are without electricity in Älvdalen but that staff are on their way.

Shortly after 09.00, an alarm came about a tree that blocked the entire

The rescue service has been able to clear and then leave the site, according to SOS Alarm.

A tree that hangs over the national road between Smedjebacken and Ludvika.

Tree over house in Medväga

According to SOS Alarm, Riksbyggen and the tenant-owner association take care of the tree that fell over a house in

The rescue service did not have to go there and the tree does not pose a danger to the public.

Power outage in Säter at 7 o'clock on Thursday morning.

The power came back on after a while.

2000 households without electricity - the worst affected is Säter

At most during the night, just under 5,000 households had power outages in Dalarna County.

The harsh weather is the sole cause.

At eight o'clock on Thursday, just under 2,000 of Dalaenergi's customers are without electricity.

The worst affected by Dalaenergi's customers is Säter.

- Right now when it is storming at its worst, we must also think about not sending staff to a dangerous place, we can probably count on it lasting another hour or so, says Veronica Bergström, communications manager at Dalaenergi.

Tree over house in Medväga

in Borlänge, an alarm came in about a tree that had fallen over a house.

Just before eight o'clock, the rescue service was on its way there.

This is what it looked like on Thursday morning on road 871, north of Varpan outside Falun.