Officials of Hajj and Umrah campaigns informed Emirates Today that their companies have started organizing Umrah trips for those wishing to perform the rituals from within the country, at an average price of up to 6000 dirhams per person, according to the degrees, programs and packages of residency and travel to and from the Holy Land, explaining that they have allocated packages 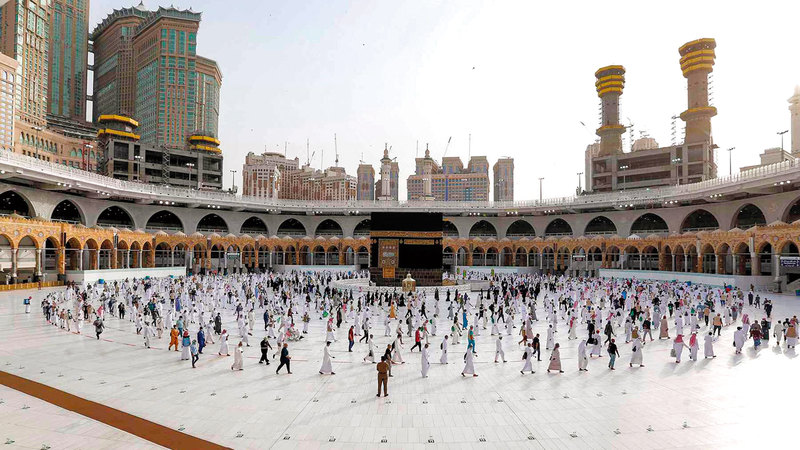 Campaigns for 5-day stay packages that include "health isolation"

The prices of Umrah trips have increased significantly.

Officials of Hajj and Umrah campaigns informed Emirates Today that their companies have started organizing Umrah trips for those wishing to perform the rituals from within the country, at an average price of up to 6000 dirhams per person, according to the degrees, programs and packages of residency and travel to and from the Holy Land, explaining that they have allocated various packages for Umrah, including Air tickets and accommodation are priced for five days, including three days for "health isolation".

In detail, campaigns for Hajj and Umrah within the country have presented various programs and packages for citizens and residents wishing to travel to the Kingdom of Saudi Arabia to perform Umrah, confirming that these programs and trips are witnessing "exceptional" administrative and preventive measures, given their coincidence with the continuing outbreak of the new Corona virus (Covid-19) ).

Campaigners in Abu Dhabi told Emirates Today that the price list for Umrah trips has witnessed a noticeable increase during the current period, with an average of between 4,600 dirhams per person in a double room and 6,000 dirhams in a single room, according to the degrees, programs and packages of accommodation and travel to and from the Holy Land, explaining The prices include air tickets and hotel accommodation (five days, including three days under the mandatory "isolation").

They emphasized that the campaigns will undertake additional preventive tasks that include educating pilgrims about the precautionary measures that must be applied before they leave the country until they leave the Kingdom of Saudi Arabia, in addition to confirming the validity of the Umrah data and health information related to confirmed airline tickets for each pilgrim and housing data, especially since the campaigns bear responsibility for the safety of this data. And the obligations that may arise as a result of their incorrectness, stressing their utmost keenness to make all efforts to preserve the safety of pilgrims, citizens and residents of the state, and to ensure the performance of safe rituals in a reassuring and comfortable atmosphere.

They stated that most campaigns commissioned their coordinators to organize awareness and guidance programs for those wishing to perform Umrah, during which the required preventive measures are reviewed, foremost among which is that the age of the person wishing to travel should not be less than 18 years and not more than 50 years, in addition to conducting a PCR examination in a laboratory body Approved 72 hours before travel, and the result is negative, proving that the person is free from the emerging corona virus, with an emphasis on the importance of a full commitment to staying in the residence hotel during the period of isolation.

They pointed out that the awareness programs deal with the administrative procedures related to travel, such as pre-booking to perform Umrah, praying in the Grand Mosque, visiting the Prophet's Mosque and praying in the honorable kindergarten according to the controls and absorptive capacity approved by applying “Umrah”, and obtaining the necessary visa to enter Saudi lands for residents of the state.

At the beginning of this November, the Kingdom of Saudi Arabia began to allow those wishing to perform Umrah and visit the Two Holy Mosques, from outside the Kingdom, gradually and in accordance with strict preventive controls, and from countries that do not suffer from a major epidemic risk due to the Corona pandemic, provided that the carrying capacity does not exceed 20 One thousand pilgrims, and 60,000 worshipers daily.

The official website of the Saudi Ministry of Hajj and Umrah stressed the need to notify the pilgrims of the precautionary health isolation for a period of three days upon arrival in the Kingdom in the hotels in which they reside, and to divide the pilgrims abroad into groups, so that each group includes 50 pilgrims, as a minimum, and book a unified program with all services ( Flight, accommodation, and transportation) coincides with the booking date for performing Umrah and the visit in the “Umrah” application.

The site indicated that the ministry works in coordination with the Ministry of Health, the Ministry of Foreign Affairs and the concerned authorities to determine the countries from which the pilgrims come, and their numbers periodically according to the classification of preventive measures, the requirements of the countries from which the pilgrims and visitors come to the Kingdom, and the approval of qualified service providers (hotels and transport companies) in accordance with The controls of this exceptional phase, the precautionary requirements and health protocols, and the availability of their services for display through the electronic marketing platforms approved in the Saudi central reservation engine, and the electronic authentication of the Ministry of Foreign Affairs and the Ministry of Hajj and Umrah for contracts concluded between external agents and Saudi Umrah companies, in line with the requirements of remote work, to protect against danger The spread of the new Corona virus.

The Ministry of Hajj and Umrah in the Kingdom of Saudi Arabia reported that the Holy Mosque is sterilized 10 times a day, before each regiment enters and after it leaves, in addition to installing devices to measure the temperatures of pilgrims, explaining that it is strictly forbidden for visitors to the mosque to reach the Kaaba and the Black Stone.

She pointed out that places designated for isolation have been prepared in the event that symptoms of the Corona virus appear on any of the pilgrims, pointing out that each group consisting of 20 or 25 pilgrims accompanies health facilities, while medical teams are assigned to intervene if necessary.