Max Seeck pushes the nordic noir star into the world. The recent translation is the book of the month for the largest bookstore chain in the United States, and a TV series is underway. 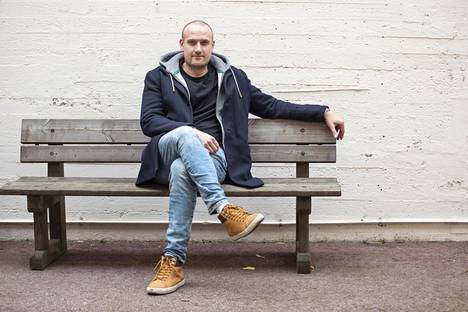 Max Seeck sounds more like a marketer with business intelligence than a bohemian artist.

- I do not have anything bad to say about the artist's home growing up, but I've always wanted to, that my life is somehow smartly paced and nothing haahuilua: in the morning put the necktie around your neck and go to work.

Seeck grew up in an artist's home, his mother is artist Riitta Nelimarkka.

Seeck applied for financial education and worked at the bank for a year.

From the bank, Seeck moved to the marketing industry.

He says he has been counting on more creative jobs all the time.

- I haven't kept a tie at work for a long time.

But that original idea has left a certain systematicity behind.

I don’t sit in any lighthouse with your punk in hand, but my work has been determined all along.

Seeck says the commercial background has brought him an understanding that good needs to be marketed and sold.

This is by no means an obvious idea for all writers.

- I've heard that my way of thinking is a bit unusual.

If someone thinks they don’t want to sell their own art, then that too should be respected.

There is a general idea in the art industry that art should not be sold or marketed, or else it is less art.

I don't believe it.

When Max Seeck set out to write his fourth novel, he thought in advance what might be of particular interest abroad.

Seeck, along with his agent, began to search for feedback from foreign publishers about spots that might be of interest to the international book market.

- It stood out that we now wanted to read about cold, snowy, dark Finland, as well as about a serial killer and a female protagonist, Max Seeck says.

- Of course, the story must be good and a little different to stand out from all the other offerings.

The thriller The Loyal Reader was born, in which criminal detective Jessica Niemi gets to investigate a mystical murder.

The wife of the murdered woman is suspense writer Roger Koponen, whose thriller series writes that the crimes are beginning to be imitated.

A good book is not yet enough for world conquest.

It requires a lot of expertise and work from the business side.

Seeck praises Elina Ahlbäck's agency, which has handled Seeck's affairs from the beginning.

The agent has been marketing Seeck's works to foreign publishers at international book fairs.

- I myself have rotated over there in the States and skimming through a variety of events and tried to bring myself to the public.

At the heart of it all is a good story and a tough sales dune, Seeck sums up.

At the same time, a TV series contract came to Hollywood and a large publishing house acquired the rights to the book.

Last week, a translation of The Witch Hunter, a loyal reader, was released in the United States.

The final version of The Witch Hunter was edited slightly in collaboration with a U.S. publisher.

- It is in no way sugar-coated for the American market.

But it has rewritten some pages so that it works better there.

The translation rights to the novel have been sold in a short time to a total of 38 countries, and a Hollywood series is being prepared based on the work.

The novel is also the book of the month by Barnes & Noble, the largest bookstore chain in the United States, in the thriller category.

- We got that sweet snowball effect, Seeck says.

The translation rights for the new novel have already been sold to 23 language areas.

Max Seeck says that the international book market needs a name from Finland for its own winter exotics: snow and darkness. Photo: Aleksi Jalava

According to a spokesman for Tammi & WSOY, Seeck’s U.S. publisher Berkley sees him as the next big name in Nordic noir, like Jo Nesbo or Stieg Larsson.

- I've always said that is it the Swedes or the Norwegians in no way better to write than the Finns.

The reason Jo Nesbo’s books have sold it for 50 million is purely because they have been sold aggressively, Seeck says.

The author is delighted that in recent years Finns have learned to take their cultural skills to the world.

If sales and marketing work is not done properly, no one will find Finnish works.

- Even if Berkley has no one in the Yankees who would read Finnish.

Yes it requires someone to go grab your wrist that hey, read this.