The U.S. presidential election campaign is stalemate in many demonstrations

China News Agency, New York, November 5th. Two days have passed since the polling day of the US presidential election, and the election results have not yet been released. From the night of the 4th to the 5th, demonstrations took place in many places in the United States. In some cities, two candidate supporters confronted each other. On November 3, local time, at the polling station of the Br 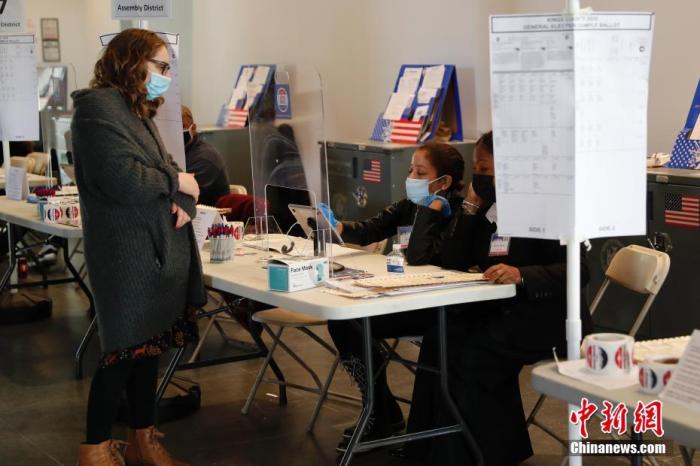 China News Agency, New York, November 5th. Two days have passed since the polling day of the US presidential election, and the election results have not yet been released.

From the night of the 4th to the 5th, demonstrations took place in many places in the United States. In some cities, two candidate supporters confronted each other.

On November 3, local time, at the polling station of the Brooklyn Museum in New York, the staff handled registration procedures for voters.

November 3 is the election day of the 2020 U.S. general election. All American voters go to polling stations to vote for the presidential election.

According to US media reports, most of the current demonstrations are relatively small, with participants ranging from dozens to hundreds of people.

The demonstrations in Minneapolis, Minnesota were relatively large and were dominated by supporters of the Democratic candidate Biden.

They chanted slogans demanding a complete count of votes, which once blocked Interstate 94.

Fox News reported that more than 600 people have been arrested for obstructing traffic in the city, and most of the arrested were released soon.

Supporters of US President Trump rallied in Phoenix, Arizona, Philadelphia, Pennsylvania and other places to demand that the election be fair.

Arizona and Pennsylvania are both important "battlefield states" for this election, and the vote-counting work in the two states has not been completed.

Biden has a small advantage in Arizona, and the Associated Press and other media believe that he has won in the state; Trump is currently leading in Pennsylvania, but his advantage is gradually shrinking due to the beginning of counting a large number of mailed votes.

The National Broadcasting Corporation reported that hundreds of Trump supporters began to surround a vote counting center in Phoenix from the evening of the 4th, claiming that the votes were fraudulent, and some of them were carrying guns.

Officials of the local elections department stated that some of the ballots in the ballot count were indeed invalid because the markers used by the voters when filling in the ballots damaged the ballots and made them unrecognizable.

On November 3, local time, the United States ushered in the 2020 election day.

The picture shows the US White House on that day.

Fox News and the Associated Press reported that a group of Trump supporters gathered outside the Pennsylvania Convention Center in Philadelphia on the 5th, but they quickly attracted opponents.

The two sides confronted each other on the street with slogans supporting and opposing the combination of Trump and Pence, and the overall peace is currently maintained.

Although demonstrators clashed with the police everywhere, except Portland, the demonstrations in most areas were generally peaceful.

According to the website of U.S. News and World Report, Portland Police Chief Chuck Lovell said on the 5th that violence occurred late at night on the 4th and some shops and ATMs in the city center were smashed; In Multnomah County, where the city is located, the county sheriff’s office stated that at least one man threw a molotov cocktail at the police, and the police confiscated at least one loaded rifle, some fireworks and firecrackers from the demonstrators Spray paint cans.

The New York Times said that this wave of demonstrations mainly revolved around the general election, but was also mixed with demands against racism and police violence.

Since a series of events such as the death of Freud this summer have sharpened the conflict between the police and the people, it is necessary to be alert to various factors that may lead to violence in the demonstrations.