Original title: Washington Zoo clarified rumors of “inadequate care” for giant pandas: "Meixiang" mother and child healthy cubs thrive   China News Agency, Washington, October 29 (Reporter Chen Mengtong) The Washington National Zoo stated on the 29th that the postpartum appetite of the giant panda in the United States has returned to normal, and the newborn male cubs have grown sturdily and have 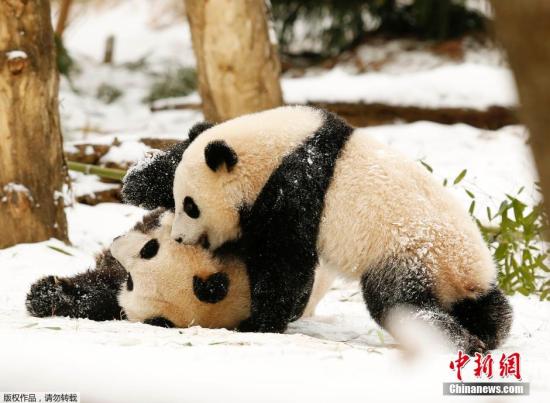 China News Agency, Washington, October 29 (Reporter Chen Mengtong) The Washington National Zoo stated on the 29th that the postpartum appetite of the giant panda in the United States has returned to normal, and the newborn male cubs have grown sturdily and have been "a circle of fat".

On August 21 this year, the 22-year-old "Mika" gave birth to a male cub in Washington.

While people are delighted with this "surprise", there are also some rumors on the Internet about the zoo's inadequate care of "Mei Xiang".

Many heads of giant panda projects at the Washington National Zoo accepted an exclusive interview with a reporter from China News Agency on the 29th to introduce the current situation of the mother and child of "Mei Xiang" and clarify relevant issues.

Data map: On January 27, 2015, local time, at the Smithsonian National Zoo, Washington, USA, the giant panda mother Meixiang and her cub "wrestled" in the snow.

Currently it eats about 30 kilograms of bamboo every day.

"As the cubs grow up and can self-regulate their body temperature, Meixiang begins to leave the delivery room longer to eat."

At the end of 2000, "Mei Xiang" and male giant panda "Tian Tian" arrived in Washington to start their career in the United States.

At present, the newborn cub of "Meixiang" is two months old, and its black and white markings are very obvious, and its hair is getting thicker.

The zoo veterinarian conducted a monthly physical examination for the cub on October 21 and received the first vaccine.

"Our chubby cub is like a wriggling bug." Breeder Laurie Thompson wrote in the zoo's "Panda Journal". The panda cub is currently 42 cm in length and waist circumference.

Smith, the deputy director of the zoo, told a reporter from China News Agency that the only source of food for panda cubs is "Meixiang" breast milk. They have been "a circle of fat" since they were born.

Its health and thriving growth also show that "Mei Xiang" is in good health.

Smith, who has worked at the National Zoo for 12 years, revealed that every production of "Mei Xiang" is selected at the same location, and this time is no exception.

Leaning on a fixed corner to feed the cubs is also the way it is used to.

For this reason, the garden has specially adjusted the wall of the delivery room to make it more secure during delivery and breastfeeding.

Regarding the saying that “Meixiang” is not fed enough and can only eat “Bingtu”, Brown-Parsgrove said that it is actually a “fruity popsicle” mixed with juice, vitamins and fresh fruits. The purpose is In order to extend the panda's eating time, it has a certain exercise effect, and it is also convenient for the breeder to clean the cage.

"If you give an apple,'Mika' will be eaten in 3 seconds. Fruits frozen in ice cubes can last for 20 minutes." Brown-Parsgrove said. Sometimes "Mika" would ignore it. At the nearby bamboo pile, head straight for the "fruit popsicles".

Smith said that the bamboo provided by the garden to the pandas is more than 100 pounds a day, and they have been replaced many times to maintain their freshness.

In addition, healthy "snacks" such as biscuits rich in vitamins and plant fiber are prepared for them.

"The food we provide is more than that of Meixiang, and it is distributed in many areas such as delivery rooms, indoor cages, and outdoors. It can go out of the delivery room to eat at any time."

At the beginning of September, the China Giant Panda Conservation and Research Center made popular science and explanations on "Mei Xiang"'s lack of food after giving birth and the small living space.

The center stated that the Panda Center and the Washington Zoo have always maintained close contact, and the two sides have established a long-term exchange and guidance mechanism.

During the calving period, Washington Zoo will monitor and care for giant pandas in full accordance with the requirements of the Panda Center.

The chief veterinarian of the National Zoo, Don Nefer, said that the zoo had performed health checkups during pregnancy, prenatal and postpartum periods, and its weight change, heart and lung function, blood samples and other data were all within the normal range.

Smith said that the high level of attention to "Meixiang" and panda cubs shows how much people in the United States and China love pandas.

The zoo communicates with its Chinese counterparts every week.

"The birth of panda cubs gives us the opportunity to show our love for giant pandas and the ability to take good care of them."

In order to allow the public to keep abreast of the movements of the mother and child of "Mei Xiang", the Washington National Zoo has opened a 24-hour "Panda Live" and regularly updates the "Panda Diary" on its official website every week.

According to the statistics of the garden, the number of page views of "Panda Live" has exceeded 1.2 million since the birth of "Meixiang", an increase of 412%.

"The birth of this panda cub is like a miracle in the epidemic. Many viewers left us a message, "Meixiang"'s child is a wonderful gift they received in 2020." said Pamela, deputy director of communications and exhibitions at the zoo .