The French president has announced the mobilization of 4,000 more soldiers to protect churches and schools. Emmanuel Macron has spoken in Nice, next to the Basilica of Our Lord The French president has announced

to protect churches and schools.

Emmanuel Macron has spoken in Nice, next to the Basilica of Our Lady of the Assumption, inside which an Islamist has killed three people this morning.

Armed with a knife, he cut the throat of one of his victims, a woman.

The aggressor has been seriously injured by the municipal police who shot him.

The mayor of the city, Christian Estrosi, (Los Republicanos LR, conservative) reported that "he kept shouting in Arabic" Allah is great 'while being treated by doctors. "He was transferred to a hospital where he is admitted.

The identity of the killer has not been officially confirmed.

has published on his Twitter account that he is "a Tunisian who recently arrived from Lampedusa", the Italian island that is a point of arrival for immigrants.

Ciotti is also a member of the LR and in another tweet he wrote: "I have come to ask President Macron at a meeting in Nice to suspend all migratory flows and all asylum procedures at the Italian border. The French must be protected! .

According to several French media, the terrorist would have given those personal references that sources close to the investigation corroborated in the afternoon.

Apparently, he did not carry identity documents with him.

If finally his identity and circumstances are those mentioned, this will give air to the speech of the leader of the extreme right, Marine Le Pen, which always unites terrorism and immigration.

The "Islamist terrorist attack", in Macron's words, took place shortly before nine in the morning.

The aggressor entered the temple and

cut the throat of a parishioner

Then he fatally stabbed a man, the sacristan, a layman of about 45 years.

The third victim is a woman who succumbed to her injuries in a bar in front of the basilica where she took refuge injured.

According to the BFMTV channel, before he passed away, he exclaimed: "Tell my children that I love them."

The municipal police of Nice, prevented, according to some testimonies, by one of the alarms set up in the streets of the coastal city, went to the scene within minutes.

And he neutralized the terrorist with bullets.

The National Assembly has observed a minute of silence.

On the rostrum, the prime minister defended the confinement announced last night by President Macron.

the alert level was going to its maximum level, called "urgent attacks"

Five hours after the attack, the French head of state arrived at the Basilica of the Assumption.

At the end of his visit, he announced the increase of 4,000 soldiers who will reinforce the 3,000 already participating in the

They will be destined to "protect all places of worship. In particular the churches so that All Saints can be celebrated in proper conditions".

He promised that schools will also enjoy protection when they open on Monday after the holidays.

This Thursday's attack is similar to the one that cost the life of Professor Samuel Paty, who was beheaded when leaving his school by a Chechen Islamist who acted on the pretext that his victim had insulted Islam by showing some of the 'Charlie' cartoons in class. Hebdo 'about Muhammad.

Macron in his brief statement wanted to express "first of all, the support of the entire nation to the Catholics of France and everywhere."

He recalled "the murder of Father Hamel" and that Nice has been hit for "the third time by terrorism."

He referred to the attack by an Islamist that caused 86 deaths in 2016 by running over the crowd with a truck that watched the fireworks on July 14.

And to a fatal attack against several soldiers a year earlier.

"Don't give in to the spirit of division"

Macron appealed to "unity" and to "not give in to terror

He also affirmed: "In France, there is only one community, the national community. I want to say to all my fellow citizens, of whatever religion, whether they are believers or not, that we must unite and not yield one iota to the spirit of division."

The president spent half an hour talking with the municipal police officers who intervened in the attack, and with other members of the security forces as well as with the scientific police investigating on the spot.

He then met behind closed doors with the local civil and religious authorities.

The bells of all the churches of France rang

for long minutes at three in the afternoon as a sign of mourning.

Pope Francis declared "praying for the victims" and the French bishops wished that "Christians do not become targets to be struck down."

The entity that represents the Muslim cult in France condemned "firmly" the "terrorist attack" and annulled in "a sign of mourning and solidarity" the celebration of Muhammad's birth.

Macron mentioned in Nice "the attack" on the French consulate in Jeddah in Saudi Arabia.

A man of Saudi nationality wounded the guard of the legation of this Red Sea city.

He is hospitalized although his life is not in danger.

seized the French news when it was reported that a 33-year-old man had been killed by the police in Avignon.

He was holding a gun and threatening passersby on a street in the southern town.

Later it was learned that he was in psychiatric treatment, the Islamist track was discarded and the investigation was entrusted to the judicial police. 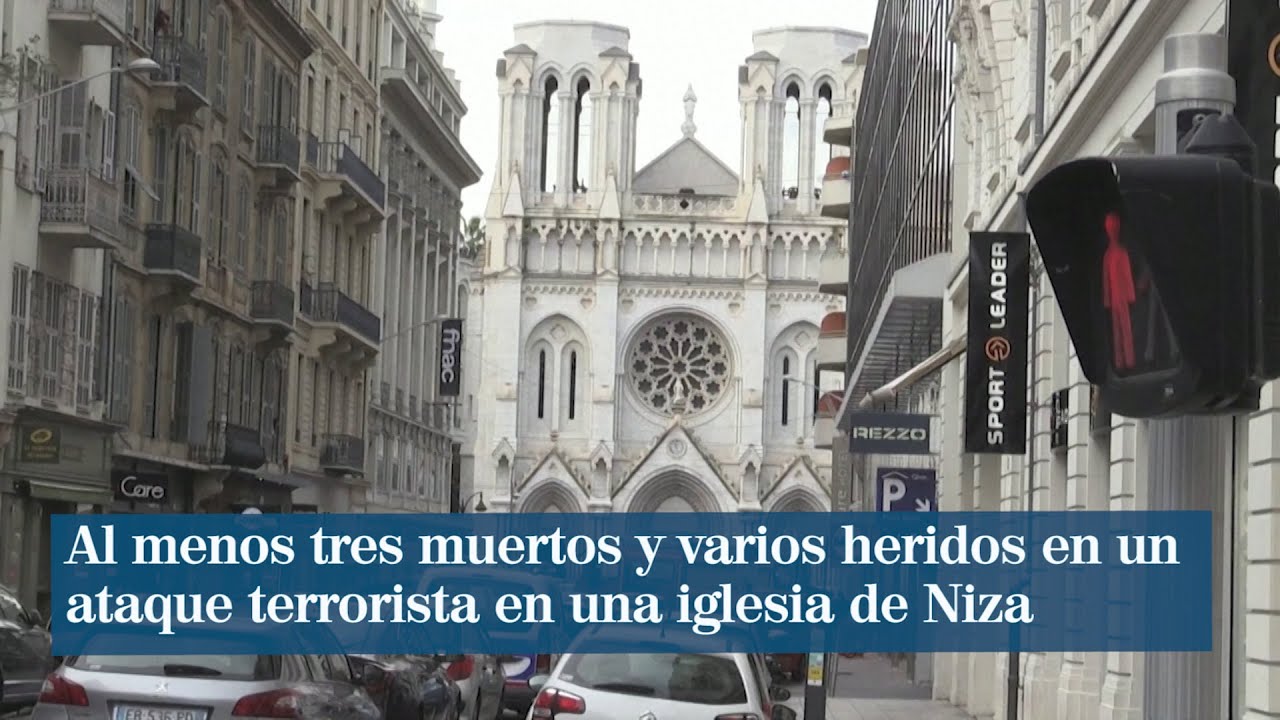 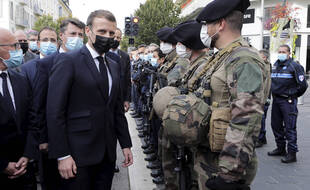 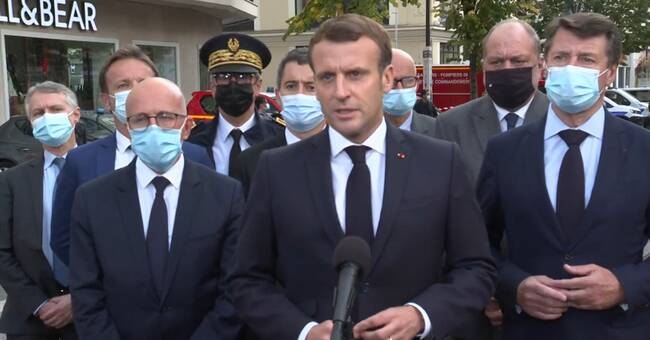 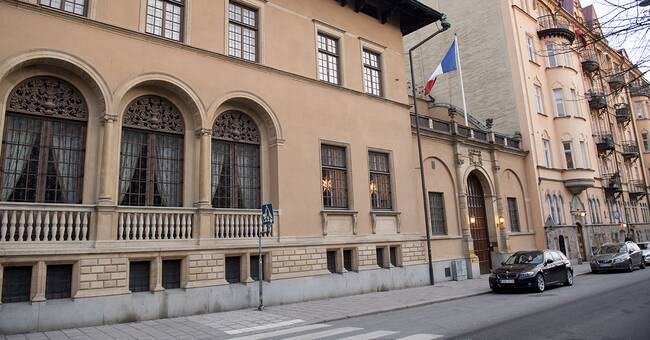 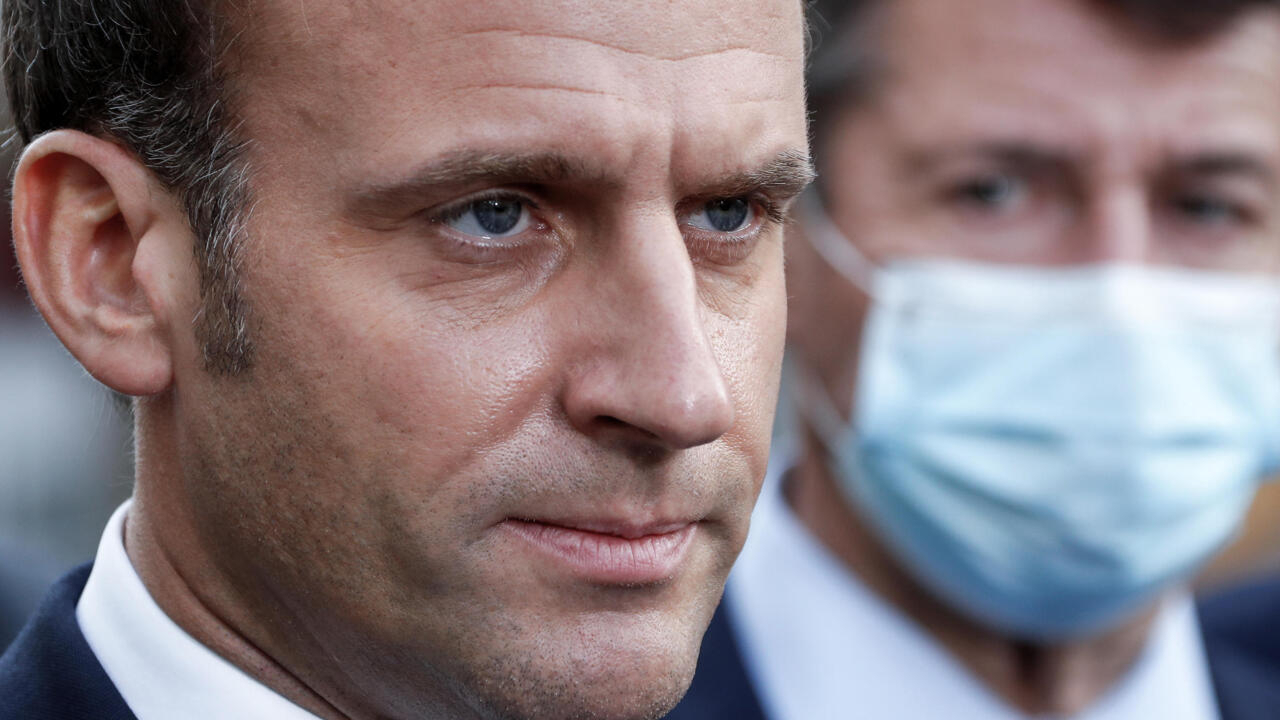 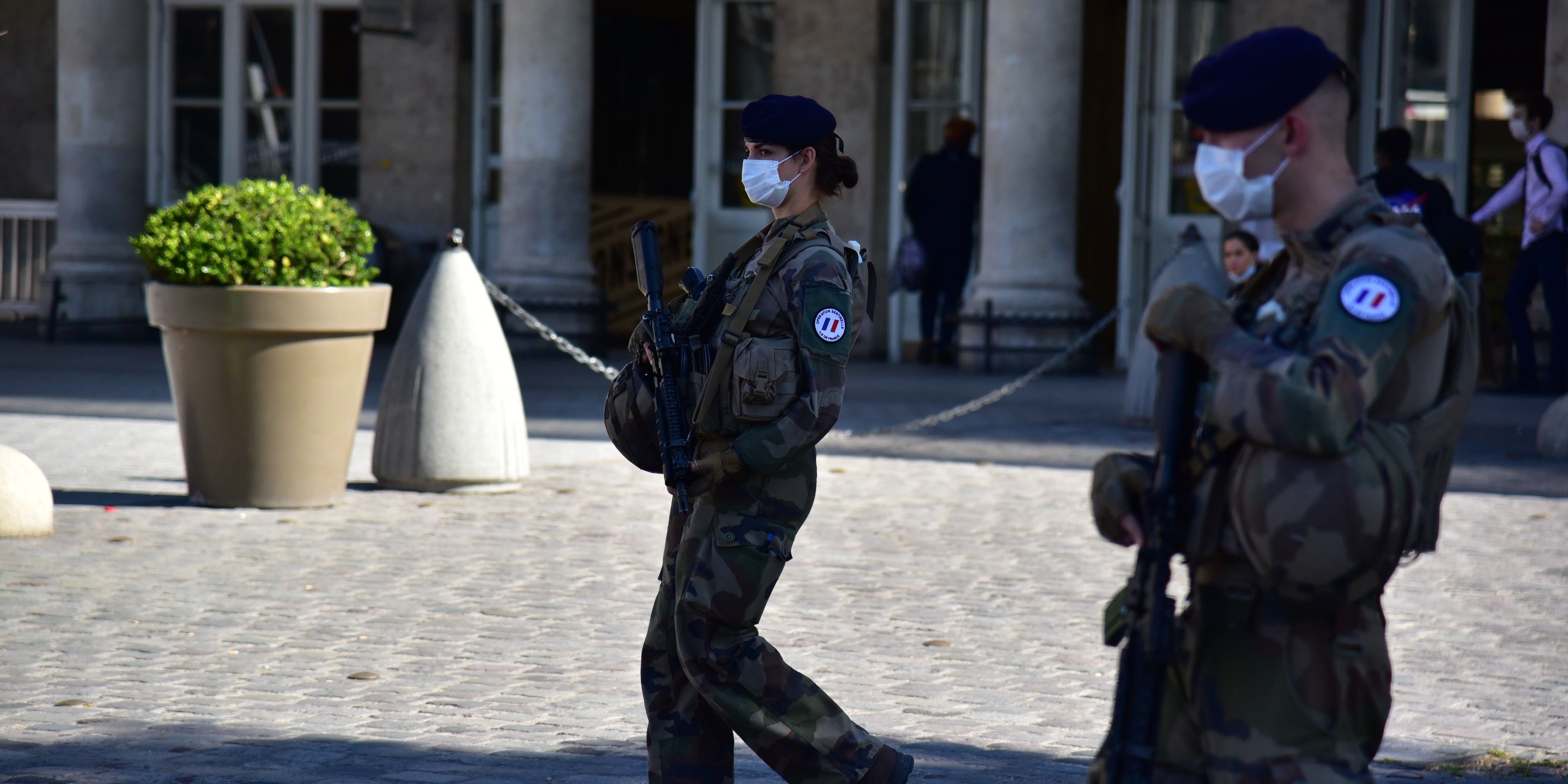 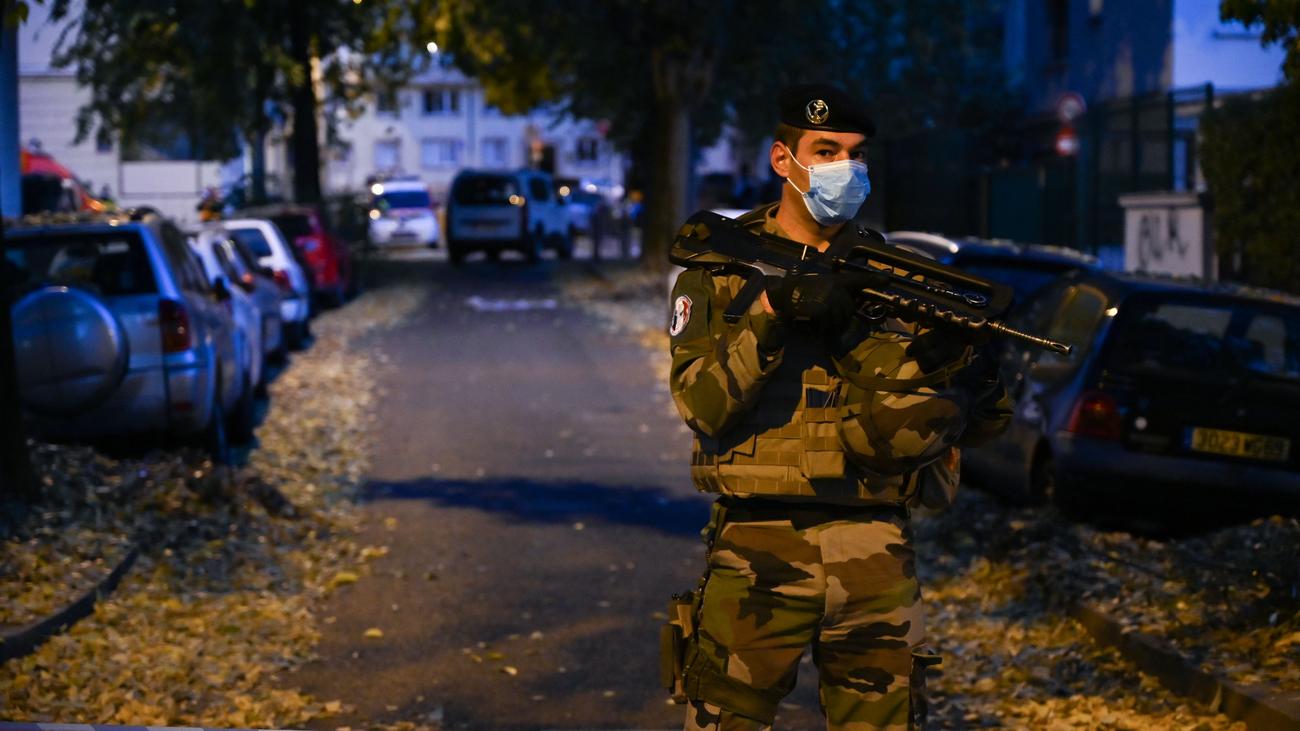 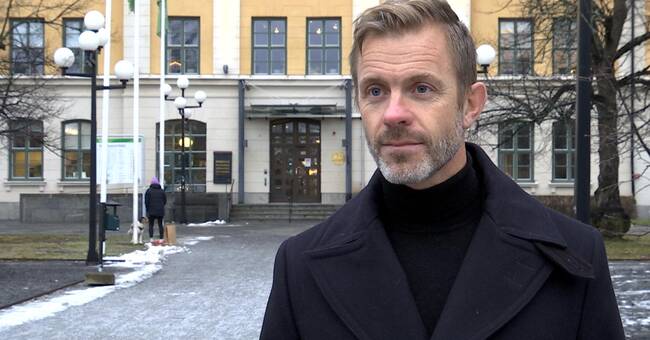 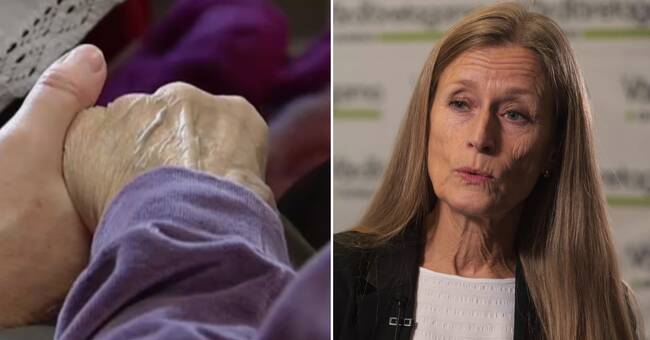