Chinanews, Beijing, October 27th, title: Samsung started the "Li Zaiyong Era", can "rich" survive three generations?   China News Service reporter Wang Qingkai   "Samsung is from South Korea and South Korea is also from Samsung."   If you compare South Korea to a listed company, this sentence may not be an exaggeration. As a "major shareholder", Samsung owns one-fifth of South Korea's shares 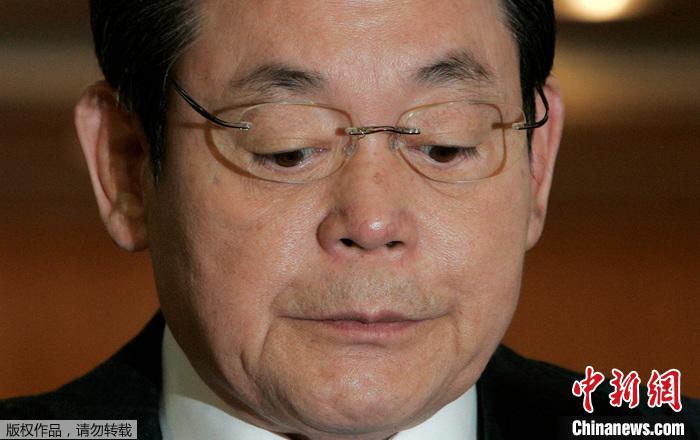 If you compare South Korea to a listed company, this sentence may not be an exaggeration.

As a "major shareholder", Samsung owns one-fifth of South Korea's shares and enjoys a certain degree of decision-making power and personnel power, either explicitly or implicitly.

The profound economic impact on the country gave Samsung's head Lee Jianxi the title of "Economic President" of South Korea.

Compared with the real president, Li Jianxi is an iron fight, and the country's president is running water.

But Samsung's influence on South Korea is not limited to the economy.

In all aspects of politics, culture, and life, Samsung is closely intertwined with the Korean government and people.

Some people describe the inevitable three things of a Korean in his life: death, paying taxes and Samsung.

Having been in charge of Samsung for more than 30 years, Lee Kin-hee decisively, through a series of "unbelievable" operations, rebuilt Samsung from a second-rate South Korean company to a world-class company.

As a result, Lee Jianxi won the respect of the Korean people and the world, but he also gained a lot of criticism because of his involvement in politics.

On October 25, the "economic president" who "coughed, South Korea would catch a cold" was able to conclude the conclusion.

Public opinion believes that what he left behind is a huge but "perilous" three-star empire, and there is a hidden worry that may lead to family power struggles because of the lack of successor capabilities.

Lee Jae-yong, currently the vice chairman of Samsung, is the only son of Lee Kin-hee. According to tradition, he will take over the "empire" scepter.

However, the outside world generally believes that compared with the eldest daughter Li Fuzhen, his eldest brother Li Zaiyong is still inadequate and is entangled in lawsuits, which makes it difficult for him to succeed.

A middle-level Samsung (China) company told a reporter from Chinanews.com that Samsung’s successor is undoubtedly Li Jae-yong, and the possibility of family power struggles is very unlikely because Li Jianxi had already made arrangements for company control before his death.

However, where Lee Jae-yong will lead the giant ship of Samsung is a big change.

"Chairman Li is a true visionary who transformed Samsung from a local company to a world-leading innovator and industrial powerhouse," Samsung said in a statement. "His legacy will be eternal."

It is most appropriate to describe Li Jianxi, who has been at the helm of Samsung for more than 30 years, with the words "foresight".

In 1987, after the early family power struggle, the "eldest son" and the second brother were deposed one after another, the founder of Samsung and the father of Li Jianxi Li Bingzhe passed away, and Li Jianxi became the chairman of Samsung.

At the beginning of his tenure, Samsung was still a company whose main business was chemical trading and the production of black and white televisions.

Because of the vast market, Samsung's management is content with the status quo, the company's operating efficiency is low, product quality problems are frequent, and there is no competitive advantage.

In the face of rivals and the rapidly developing global electronics industry, Lee Jianxi, who returned from studying in the United States, showed his “visionary vision”: South Korea is a small country and must develop high-value-added industries. Enterprises and the country have hope. Work at Sanyo in Japan.

Li Jianxi set his sights on the semiconductor industry.

When the intention to develop semiconductor technology was proposed, no one from Samsung's management agreed.

"This is an industry with high investment and no benefits for a long time." "Semiconductors will destroy Samsung."

In 1974, he desperately used his own funds to buy a South Korean semiconductor company.

After 10 years of concentration, 64KDRAM was finally launched, but the price of memory plummeted immediately.

By the end of 1986, it had accumulated a loss of 300 million U.S. dollars, and all equity capital was in deficit.

What is slightly more tragic is that until the day of his father's death, Samsung Semiconductor did not see any profit.

Because of the long-term recession in the memory market, many industry hegemons like Intel really couldn't stand it and withdrew one after another.

Li Jianxi saw a glimmer of light, and he continued to invest a lot of money, ready to "use money to kill other opponents."

That year, the United States initiated an anti-dumping lawsuit against Japanese semiconductor companies, and the two sides reached an export restriction agreement, and Samsung took this to rise.

Li Jianxi's courage really showed, he decided to use all the profits of Samsung Electronics last year to expand production capacity, deliberately expanding the industry's losses.

In the end, all other players will be killed.

This is how Samsung achieved its dominance.

This "unbelievable" operation was repeated on the LCD panel again.

It also makes Samsung the dominant player in this field.

"Business is to see what others can't see." Years later, when someone asked him what business was, he replied.

One’s destiny, of course, depends on one’s own struggle, but one must also consider the course of history...

In the rise of Samsung and many classic business wars, the South Korean government followed suit.

In the 1970s, the Korean government encouraged the development of heavy and chemical industries in order to achieve economic independence.

Under the government's policy guidance and financial support, Samsung has established subsidiaries such as Samsung Chemical and Samsung Petroleum.

With the help of government support, Samsung has earned a lot of money, which will also lay the capital foundation for Samsung to vigorously "spend money" to develop Samsung Electronics in the future.

Later, Li Jianxi set his sights on the semiconductor industry for this reason. South Korea launched the "Six-Year Plan to Promote the Development of the Semiconductor Industry."

Samsung followed the policy closely, and finally achieved what Samsung is today.

As Samsung grows, the relationship between Li Jianxi and the government has become more and more delicate.

When Lee Jianxi made his conclusion, Guanghui failed to cover up the "stain". The people have been controversial over his life. Some people call him a "Korea economic giant" and others call him "a representative figure of Korean political and business collusion."

The root cause is that Samsung has either actively or passively interfered in politics too much.

In 1996, Li Jianxi was accused of bribery to the former president and was sentenced to a two-year probation, but he was exempted from sponsoring a $10 million political contribution to the presidential candidate. In 2009, he was sentenced to three years in prison for several crimes including tax evasion. At the end of the year, he was pardoned by the South Korean President.

"It has strengthened the economic structure centered on chaebols, has not recognized trade unions, and has left shadows of opaque governance structures, tax evasion, and political and economic collusion."

In order to avoid the recurrence of the family fighting situation that happened to him, Li Jianxi determined his successor early.

However, apart from Li Zairong, he seems to have no other options.

Lee Jae-yong actually took power after Lee Jianxi suffered a heart attack and was admitted to the hospital in 2014.

But this successor has yet to show off the wisdom and talents of his parents.

Frequent involvement in political scandals seems to be the fate of Samsung's helm.

In 2017, a photo of Li Jayong wearing handcuffs spread across the Internet, although the handcuffs were intentionally covered with black gauze.

But the image of this successor fell to a trough in an instant.

Lee Jae-yong is accused of bribery for profit from the protagonist of his cronies and the best friend of President Park Geun-hye.

However, when he was released in court, he had spent a year in prison.

It is not over yet, this year he was sued again on suspicion of illegally inheriting business rights.

Currently, there is still a risk of jail time.

In May of this year, Lee Jae-yong publicly apologized to South Korean nationals and said that he would not inherit the right to operate the company to his children.

He wants to reduce the people's worries and anger about Samsung's intervention.

On the way to becoming his successor, in addition to political scandals, Lee Jae-yong also faces a huge inheritance tax problem.

In order to inherit shares in a company with a total market value of 18 trillion won under his father’s name, Lee Jae-yong would have to pay 10.6 trillion won in inheritance tax.

If the inheritance tax is paid by selling shares, it will weaken the Li family’s control over the group.

A lot of money can be raised by selling other industries besides Samsung Electronics.

Even if he succeeded to the throne of the empire, Lee Jae-yong still faced great pressure.

This pressure comes more from competitors.

"To be in charge of Samsung in a very different era, the heirs will face the challenge of transformation." The Wall Street Journal commented that although Samsung has created a "global empire" that covers almost all electronic products and their core components, it is very fragile.

The above-mentioned middle-level management of Samsung (China) admitted to the China News Network reporter that the absolute technological superiority that Samsung has always been proud of is facing strong challenges, and the market is being eroded step by step by rivals.

"This pressure mainly comes from China."

Take the mobile phone business as an example. Samsung's global smartphone sales have been ranked first in the world in recent years, but its gap with Huawei, which ranks second, is getting smaller.

According to data from Counterpoint Research, a market research company, in 2019, Samsung's global market share was 20% and Huawei was 16%. The difference between the two is 4%. In the second quarter of 2020, Huawei's global mobile phone market share slightly surpassed Samsung, ranking first.

What makes Samsung feel even more pressured is that, except for Apple at No. 3, Xiaomi, Oppo, Vivo, and Lenovo are all Chinese companies from No. 4 to No. 7.

Judging from the financial data of Samsung Electronics and Huawei in 2019, Samsung surpassed Huawei in terms of scale and financial stability.

Samsung's advantages are gradually being wiped out.

Especially in China, Samsung's mobile phone market share in China has shrunk to less than 1%. In recent years, the industry chain of factories in China has been frequently shut down, which has been heatedly discussed by the market.

"The Wall Street Journal" pointed out that in the past six years, although Lee Jae-yong has become the actual leader, Samsung has not undergone a transformation during this period and has fallen into trouble instead.

It has neither developed local software or services that can increase the loyalty of its series of products, nor has it been able to keep up with competitors.

For example, Chinese companies have caught up with Samsung in terms of electronic product functions and slashed Samsung in terms of price; Amazon and Google in the United States have more expertise than Samsung in the field of services, and both have launched popular home speakers or smart phones.

South Korea has a hierarchical family social system, perhaps constrained by the shadow of his father. Since Lee Jae-yong has not handed in his outstanding transcripts, the empire has been under the influence of the "explosive gate", "bribery gate" and "ganzheng gate". Precarious wind and rain.

Shopping malls are like battlefields, sailing against the current.

The era that belonged to Li Zayong was officially opened, but there was not much time left for Li Zayong.