Kumlabon Jonas won international photo competition: "It has never been more rocking to be a bird photographer than now"

In March last year, Jonas Classon from Kumla took the picture, which has now been awarded in several international photo competitions. That it was a photo above the ordinary, he realized even then. - When I looked at the display, the hair rose in the neck. It was a magical moment, says Jonas Classon. 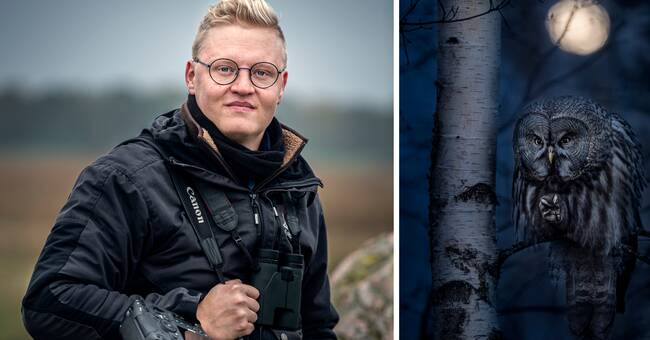 At a first attempt to reach Jonas on Friday, it is busy, but he calls after a few minutes.

- I was busy in an interview, there have been a few recently, he laughs.

And it is not only in the Swedish media that kumlabon is noticed.

His photo of the barn owl in Örebro was recently published in the British The Times.

- The phone has been hot since then and I am afraid it will continue, he says in a playful tone.

The reason for all the attention is that Jonas' picture was recently awarded in several international photo competitions, and won the category "Animals in their environment" in the competition Siena International Photo Awards.

Almost 50,000 entries participated in the competition and the jury includes photographers and editors from National Geographic and the BBC.

- I try to send in some competition entry every year, but this one is so very strong that I sent it to several people.

Focus on the barn owl - exhibited at Marieberg mall

He kept the picture of the barn owl secret for a year and a half and it is part of an upcoming project that he will publish at the beginning of next year.

He has had an interest in the barn owl for ten years.

He was seriously ill at the time, but says that his interest in birds and nature helped him back.

- Just the barn owl, I hardly experienced as a bird, but rather a creature or troll.

Now I have worked with barn owls for six or seven years and the owl in the picture I worked with for 40 days in a row.

The image is a result of getting close to the bird and becoming one with nature.

- I am super happy that the barn owl gets the attention it deserves.

It has never been more rocking to be a bird photographer than now.

Some of Jonas Classon's photographs are currently on public display at Marieberg mall in Örebro.