About Harakka Asema-aukio's taxi driver: "You may have to be prepared to take a municipal initiative so that the City of Helsinki's rules of procedure would intervene"

Parliament today discussed a series of amendments to the Taxi Act.The taxi law amendment series was praised by MPs, but a few things remained to be complained about by MPs. The availability of taxis, Kela rides and, for example, the taxi war at the Helsinki railway station do not provide answers to the taxi law. - Especially the taxi station next to Asema Square often resembles the Middle East market more than the Finnish capital. This fix kit addresses many, 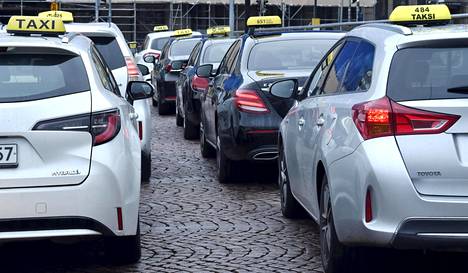 The taxi law amendment series was praised by MPs, but a few things remained to be complained about by MPs.

The availability of taxis, Kela rides and, for example, the taxi war at the Helsinki railway station do not provide answers to the taxi law.

- Especially the taxi station next to Asema Square often resembles the Middle East market more than the Finnish capital.

This fix kit addresses many, but not all, of the issues.

It also seems clear that some kind of quota is needed.

Honest and good taxi entrepreneurs are constantly crashing when drivers arriving on the market from the conveyor belt who are ready to do it cheaper, MP Riikka Purra (ps) stated.

- Is it certain whether this presentation will end the taxi wars on that pole now, MP Jouni Ovaska (center) asked.

The taxi stand at Helsinki railway station often has a rumble between drivers arguing about customers.

Minister of Transport and Communications Timo Harakka (sd) announced that he would take his own municipal initiative to get the station's taxi war to grip.

- Last time, attention was paid to the härdell that prevails at Helsinki railway station, for example.

In it, the Minister of Transport and Communications may have to prepare to take a municipal initiative in order for the City of Helsinki's rules of procedure to intervene, Harakka answered questions about the taxi driver at Asema Square in Parliament.

The current government is in the process of amending the 2018 taxi law passed during the last parliamentary term under the leadership of Transport Minister Anne Berner (center), which liberalized competition and deregulated regulations.

According to Minister Haraka, the purpose of the repair series is to improve safety, transparency of pricing and the availability of taxis, as well as to eradicate the gray economy.

The aim of the repair kit is to restore the confidence of customers and industry players in the operations of the taxi industry.

In the taxi law amendment series, taxi drivers, among other things, are required to take an exam, taxi operators also receive training, the taxi permit requires the entrepreneur's business ID, and the customer must be clearly shown either the fixed price of the taxi trip or the taximeter pricing before the trip.

The taxi reform of 2018 has received a lot of criticism for the introduction of unskilled and language-free drivers and the gray economy in the taxi industry.

According to Haraka, the driver and entrepreneur test will eradicate this problem.

- The criminal record will of course be checked.

And that exam is only available in Finnish and Swedish.

Yes, it is meant to measure language skills.

The purpose of entrepreneurship training is then, on the competence side, to ensure that all employer obligations and tax obligations are understood to be taken care of, Harakka stated.

According to Minister Haraka, the training required of drivers and now also taxi entrepreneurs takes care of drivers' professional and language skills, and eradicates the gray economy. Photo: Markku Ulander

MPs hoped for another part of the taxi law repair series.

The repair kit does not interfere with Kela rides, for example, which are under the administration of the Ministry of Social Affairs and Health.

- However, it would be important to speed up further preparations so that these public services, or Kela rides, can now be extended so that we do not have to take Grandmaes from Huittinen to Pori first and then return empty, when a taxi driver from Pori takes her grandmother back to Huittinen and returns empty. .

In other words, we must now challenge other ministries to this co-operation and take this forward, MP Jari Myllykoski (left) saw.

There is little to no problem with taxi availability problems.

Minister Harakka admitted that the authorities do not have a good enough picture of where in Finland there are problems with the availability of taxis.

- This is the most challenging point, first to get an accurate idea of ​​accessibility and then to find ways to improve it.

The authorities do not have a sufficiently comprehensive picture of where and when there are problems in the provision or availability of taxi services in different parts of Finland as a basis for allocating measures.

For this reason, the government’s proposal suggests that service providers should provide information on the supply and actual demand for the services they provide or transmit, broken down regionally and over time, Harakka said.

The reform of the Taxi Act abolished the so-called station obligation.

When the station obligation was in force, rides could only be taken from one's own area and taxis were ordered to be on duty in their areas even during quiet hours of the day.