The start of the second phase of "Umrah" and prayer at the Grand Mosque, at 75% of the capacity 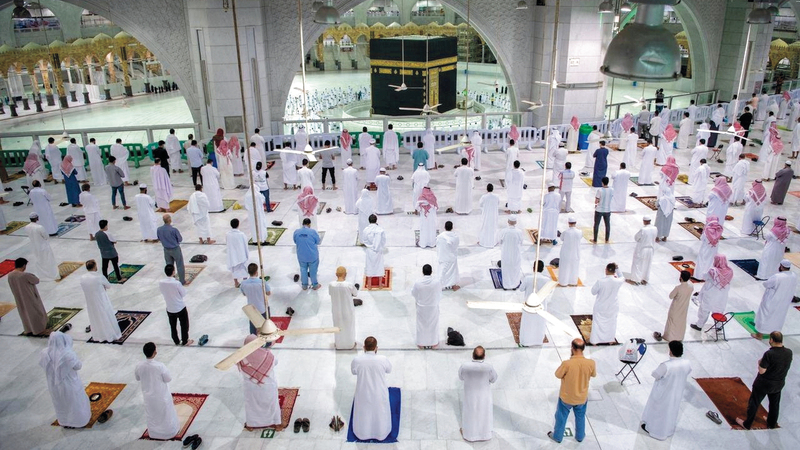 According to precautionary measures to prevent the spread of "Corona"

The start of the second phase of "Umrah" and prayer at the Grand Mosque, at 75% of the capacity

Citizens and residents of the Kingdom of Saudi Arabia performed the prayer at the Grand Mosque yesterday, with the start of the second phase of the gradual return to Umrah of citizens and residents from inside the Kingdom to perform Umrah rituals and prayers in the Grand Mosque, with 75% of the capacity after the approval for the gradual return of Umrah was issued according to Precautionary measures to prevent the spread of the new Corona virus (Covid-19).

The Saudi Ministry of Hajj and Umrah, the General Presidency for the Affairs of the Grand Mosque and the Prophet’s Mosque, and the Ministry of Health raised the degree of readiness and all preparations for the service of pilgrims in accordance with the highest quality standards in providing services, in addition to applying all precautionary measures, and using all technical systems and electronic programs.

To facilitate the procedures and provide full services with all speed and perfection, the General Automobile Syndicate provided buses to transport pilgrims and worshipers from the parking lots designated for parking their cars to the Grand Mosque and then return to it.

The Presidency recruited its apparatus to receive pilgrims and took all preventive and precautionary measures to maintain their safety, as 4000 workers participate in washing, disinfecting and sterilizing the Grand Mosque 10 times a day, and distributing 900 liters of sterile hand sanitizer per day through 300 devices in all corridors of the Grand Mosque, 1000 liters of sterile carpets and 2500 liters of sterile surfaces In addition to 1,200 liters of the finest smells, six distribution points are prepared for vehicles, 5,000 free wheelbarrows and 600 electric trolleys are prepared. More than 180 field supervisors are supervised on the field to follow up on the vehicles' progress and ensure the implementation of precautionary measures, and 38,500 bottles of Zamzam water are distributed daily for pilgrims and worshipers. , In addition to 50 portable backpacks that water the worshipers and pilgrims around the clock, and six points where containers of Zamzam water are distributed according to preventive measures, so that all the packages are sterilized before they are filled, and the workers at the Zamzam Water Administration distribute them according to health controls and instructions.

The second stage allows obtaining four types of permits: performing Umrah rituals, praying in the honorable kindergarten, praying in the Prophet’s Mosque, and greeting the Prophet and his companions, and according to the executive plan drawn up by government agencies in the Kingdom of Saudi Arabia, the second phase of the return of Umrah and visitation witnesses Greater numbers from the first stage, reaching 15,000 pilgrims and 40,000 worshipers per day, as a maximum, as citizens and residents will be allowed to perform Umrah rituals at 75% of the capacity that takes into account the health precautionary measures of the Grand Mosque, and each regiment will be allocated only three hours to complete the rituals of Umrah.

According to the latest official statistics issued by the Saudi Ministry of Hajj and Umrah, the number of pilgrims in the first phase reached 54,000 pilgrims, their level of satisfaction with the services provided reached 94%, and the ministry confirmed that no case of infection with the Coronavirus was detected in the entire phase, and indicated that the average time of performance Umrah starting from the gathering point until returning to it, it reached approximately 1:42 hours, and the average time for Tawaf was 19 minutes.

The total number of registrants in the "Umrah" application since its launch on September 27, until the day before yesterday, reached one million and 200 thousand beneficiaries, and the number of permits issued by the Ministry to perform Umrah rituals reached more than 600 thousand permits.

The General Presidency for the Affairs of the Grand Mosque and the Prophet's Mosque called on all worshipers and pilgrims to adhere to and adhere to the specified times according to the permits issued, to adhere to precautionary measures and preventive measures, to wear medical masks and to sterilize hands continuously, and to cooperate with the employees of the presidency and the bodies working to serve pilgrims and worshipers, and not to bring food and drinks And adhere to the specified times of entry and exit.

The stage allows 15 thousand pilgrims and 40 thousand worshipers to enter daily ... and to complete the rituals within three hours for each group.

Workers participate in washing, disinfecting and sterilizing the Grand Mosque 10 times a day.