Masked Singer Finland returned to the boxes on Saturday. There was fierce speculation on social media as to who was hiding behind the masks this time. 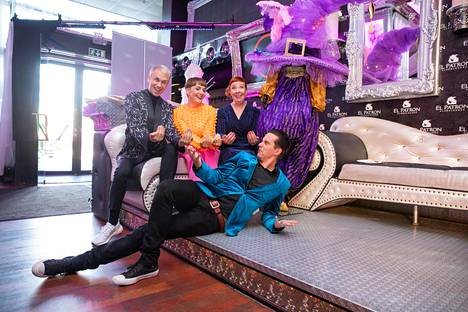 Masked Singer Finland returned to the boxes on Saturday with new episodes and new characters.

Both the presenter Ile Uusivuori and the panelists Maria Veitola, Jenni Kokander, Christoffer Strandberg and Janne Kataja very much speculated who this time is actually behind the masks.

At the end of the evening, one of the characters had to reveal his identity and this time the character Marja Hintikka was revealed as a character named Owl.

Once again, the program sparked a lively discussion on social media.

The messaging service on Twitter, among other things, fiercely speculated about the true identities of the six characters who appeared in the episode.

The identities of the characters were diligently guessed on Twitter. Photo: Joonas Salo

In addition to guesses, the program also spawned a huge amount of positive feedback from Twitter users.

Many praised the format for being able to bring the whole family together on television.

As last spring, this time too, people rejoiced at the return of the program to television right now, when corona restrictions have been tightened again.

- All the best entertainment.

A tough race is going on at home and again there is a time when there are a lot of corona restrictions, one praised.

This is a great format, said another.

All the sounds sound really familiar, but I still couldn’t figure out who is who, the tormented third.

Shouldn't have looked, but again this is being tapped, admitted one Twitter user.

Saturday nights have been saved again, one viewer glowed in his comment.

Pakkanen, who appeared second, seemed to have made a special impression on television viewers.

The judges bet that either Renny Harlin or David Hasselhoff would hide behind the character who communicated in English.

On Twitter, Pakkanen's performance was glowing profusely and the guesswork about the character's true identity was also heated.

At home, it was speculated that Pakkanen would be actor Ron Moss or Lordi's soloist Tomi Putaansuu.

However, the actual identity of the frost was a complete mystery to many Twitter users.

- Jestas, when this Frost is awesome, one Twitter user glowed.

- Pakkanen is throwing my favorite character in the whole program, another shouted.

- I never thought I would say that, but Pakkanen is great, the third Twitter user agreed with the praise.

- Frost may be Lordi but I don't think so.

Because they speak English, it is hardly a Finnish person.

Ron Moss would be a tough bet, one speculated in one of his comments.

Who do you think was hiding behind the masks?

On the MTV3 channel.