The United States rejected the proposal of Russian President Vladimir Putin to extend the START III treaty for a year without serious analysis, said Russian Ambassador to the United States Anatoly Antonov. Earlier, the US President's special envoy for arms control Marshall Billingsley accused Russia of allegedly "backing down" from the "historic" agreement on control over nuclear arsenals. However, experts emphasize that this is a condition that the United States tried to set for the extension of START III: Washington wanted the parties to "freeze" not only strategic, but also tactical nuclear arsenals. According to analysts, the US refusal to extend the treaty contributes to global instability and is associated, among other things, with the solution of pre-election problems. 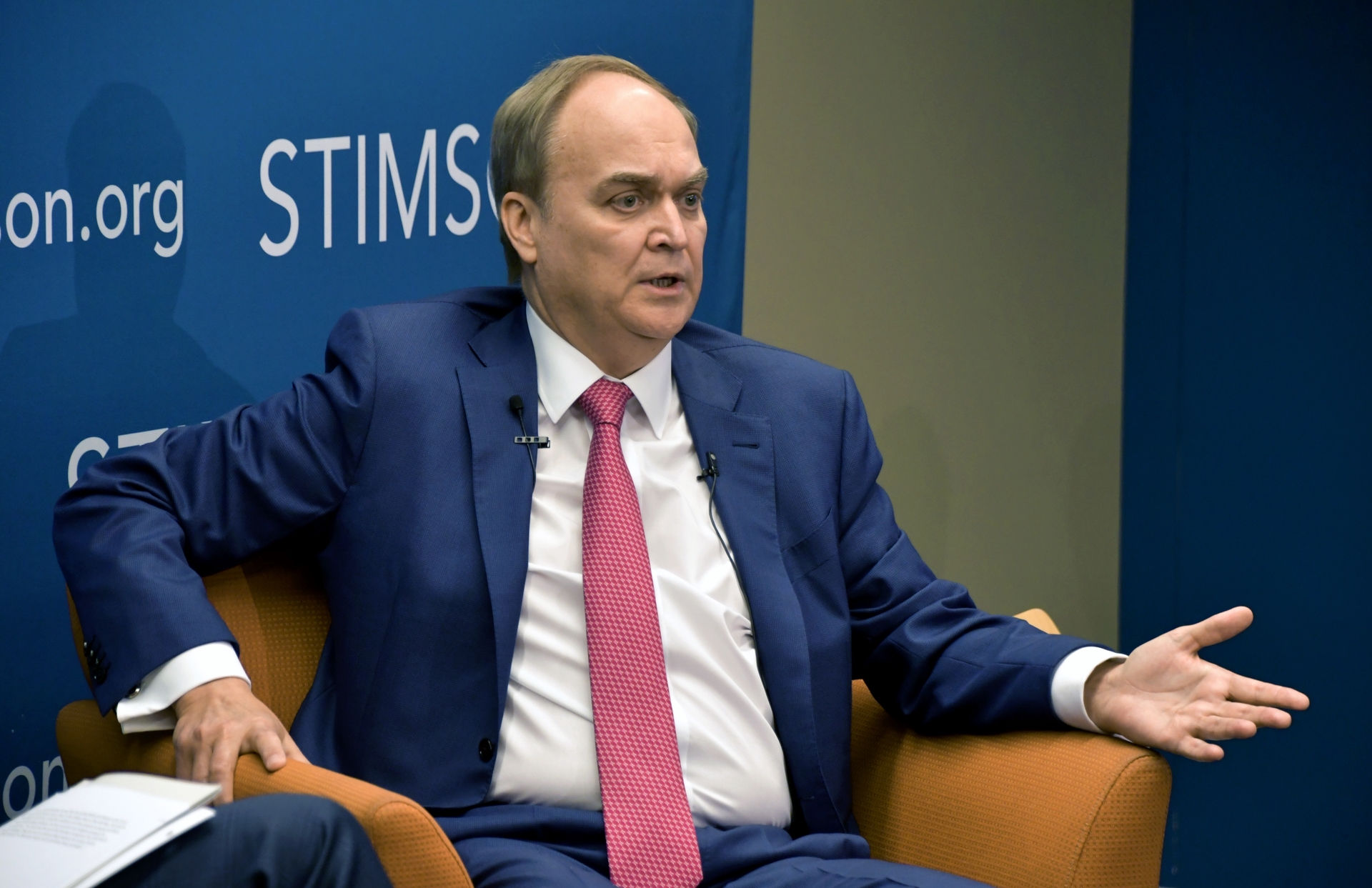 The US leadership rejected the initiative of Russian leader Vladimir Putin to extend the START III treaty for a year without any serious analysis.

This was stated by the Russian Ambassador to the United States Anatoly Antonov, speaking in the program "Big Game" on Channel One.

According to the diplomat, on October 16, "two explosions thundered in the American information space."

“The first explosion was when the world heard that Vladimir Vladimirovich Putin was taking another step forward to meet the Americans, trying to save arms control.

And the second explosion - when the Americans unambiguously, without any, in my opinion, serious analysis simply took and rejected the proposal of Vladimir Vladimirovich Putin, ”Antonov explained.

At the same time, the American side is deliberately trying to distort the reasons for Moscow's rejection of Washington's proposals on the extension of START III, the ambassador added.

We will remind, on the eve of the US President Donald Trump's special envoy for arms control Marshall Billingsley accused Russia of “backing down” from the agreement covering all nuclear weapons.

“The United States has made every possible effort.

It is disappointing that the Russian Federation has backed off from an agreement that for the first time applies to all nuclear warheads.

This would be a historic agreement beneficial for the United States, Russia and the whole world, ”he wrote on Twitter.

The United States made every effort.

It is disappointing that the Russian Federation backtracked on an agreement covering all nuclear warheads for the first time.

This would have been an historic deal, good for the US, Russia, and the world.

A similar statement was made by Assistant to the President of the United States Robert O'Brien, his statement was published on the official Twitter of the US National Security Council.

“Such a step would be beneficial for both sides, and when I met with my colleague in Geneva, we thought that Russia was ready to accept this proposal.

Today's response from President Putin to extend START III without freezing its nuclear potential is a dead end, ”O'Brien wrote.

He added that the US hopes that Russia will reconsider its position "before the costly arms race unfolds."

The day before, the topic of extending the Russian-American treaty on the limitation of nuclear weapons was raised at a meeting of Russian President Vladimir Putin with permanent members of the Security Council.

During the meeting, Russian Foreign Minister Sergei Lavrov said that the initiative of the Russian side to extend the START-3 treaty for five years without preconditions is gaining increasing relevance.

Moscow is ready to work on new agreements and has already made specific proposals, Lavrov explained.

In response, the American side put forward “quite numerous” proposals - unlike Moscow, Washington presents them as preconditions for the extension of START III.

Commenting on the current situation, Vladimir Putin proposed extending the START treaty for a year without preconditions.

“In this regard, I have a proposal, namely: to extend the existing Treaty without any conditions for at least a year in order to be able to conduct meaningful negotiations on all parameters of those problems that are governed by agreements of this kind, so as not to leave our countries and all states of the world that are interested in maintaining strategic stability, without such a fundamental document as the Strategic Arms Treaty, ”said the Russian leader.

As Sergei Ermakov, head of the regional security sector at the RISS Defense Research Center, noted in an interview with RT, the Russian side is trying to maintain stability and security in the world - this was the goal of the proposal to extend the current START III treaty for a year without preconditions.

“This term is a compromise proposal.

Of course, in fact, it would be better to extend the contract for five years, as Moscow originally proposed.

During this time, the parties could prepare new agreements, move forward in negotiations, taking into account new realities, ”the expert explained.

Marshall Billingsley voiced the idea of ​​“freezing” nuclear arsenals as a condition for extending START III back on October 13 during a videoconference organized by the conservative foundation The Heritage Foundation, which is engaged in humanitarian research.

The official said that "the so-called START III treaty surprisingly limits more than 90% of the US nuclear deterrent, and Russia's less than half."

Billingsley said that the United States has already informed the Russian side of its readiness to extend START III "for a certain period of time" on condition that Moscow agrees to limit or "freeze" its nuclear potential, adding that it is about tactical nuclear weapons.

“We are ready to do the same (“ freeze ”the nuclear arsenal. -

It is hardly in anyone's interest for Russia to continue to build up its arsenal of tactical nuclear weapons systems that they like to threaten NATO with.

We cannot agree to this, just as we cannot agree with a concept that does not take into account 55% of the Russian arsenal, or even more.

So we offered a compromise: agree with us to freeze, and we will extend START III for a certain period of time, ”Billingsley said.

At the same time, he added that the American side will need to get some "significant confirmation" of the fulfillment of the conditions.

According to experts, when talking about the "freeze", American officials mean tactical nuclear arsenals that are not covered by the START III treaty.

“START is a treaty on strategic offensive arms, but now Washington is trying to cram new tactical weapons and hypersonic ones into it.

The United States sees how Russian defense technologies are developing, so the Americans are trying to bargain, setting the conditions for the extension of START III.

From the American point of view, all the Russian weapons that worries the Pentagon should be included in the treaty, but the United States is not going to limit its new weapons, ”explained Sergei Ermakov.

The expert added that Marshall Billingsley expressed the position of those American politicians who call START III a "concession" by the United States to Russia.

“But this is not so, START III is a very compromise document.

At the time of signing, it was strengthening strategic stability and meeting the interests of the United States and Russia, ”explained Ermakov.

“We cannot only agree with the freezing of nuclear warheads, as the Americans want.

Because this is only one of the factors affecting strategic stability, ”Ryabkov said.

The diplomat explained that it is necessary to deal with issues of space, and issues of missile defense, and US carriers of strategic range in conventional equipment.

In addition, Ryabkov denied the reports of the American side about the existence of some kind of "agreement" that Russia supposedly should accept.

The diplomat called these statements “thimble-making” and “nonsense”.

Ryabkov previously explained that the approaches of the United States and Russia on arms control diverge greatly.

As a military expert, retired colonel Viktor Litovkin, explained in a commentary to RT, the idea of ​​the American side to tie the issue of tactical nuclear weapons to the START III treaty initially has no prospects.

For such an agreement to be reached, the parties would first have to announce to each other the composition and number of tactical nuclear weapons, and then begin negotiations on their reduction, the expert noted.

“In addition, to start the negotiation process, the United States must withdraw from Europe all its tactical nuclear weapons, which pose a threat to Russia.

They do not want to do this, since they believe that tactical nuclear weapons in Europe are a guarantee of NATO's security.

With such approaches, there can be no negotiations, ”Litovkin emphasized.

Recall that the Treaty on Measures to Further Reduce and Limit Strategic Offensive Arms (START III) was signed by the presidents of the United States and Russia in 2010 for a period of ten years.

The agreement can be extended for another five years.

The agreement expires on February 5, 2021, if Moscow and Washington do not manage to agree on its extension by this time, the document will expire.

According to experts, Washington is putting forward more and more new conditions within the framework of the discussion on the extension of strategic offensive arms, largely for internal political reasons.

This point of view was expressed in a commentary by RT by HSE professor Dmitry Evstafiev.

“Washington is trying to achieve a major image breakthrough for Trump ahead of the election.

For this, the American side needs Russia to accept the agreement on the terms of the United States.

Otherwise, Moscow will be accused of disrupting the negotiations.

Unfortunately, this process is now a political show for the United States, ”the expert explained.

Sergey Ermakov is of a similar opinion.

The expert recalled other requirements put forward by the United States.

For example, American politicians insist on bringing the PRC into negotiations on nuclear arms control, despite the fact that Beijing has repeatedly made it clear that it does not intend to join the Russian-American treaty.

However, the US rejects all alternative opinions, the expert explained.

“The problem is that Trump wants to declare his foreign policy victories ahead of the election.

Simply prolonging the treaty will not look like a political triumph.

On the whole, Washington's approach to negotiations could ultimately lead to the collapse of the arms control regime.

At the same time, if the START-III treaty ceases to exist, the level of uncertainty in the world will sharply increase, there will be a direct threat to global stability, "Yermakov summed up.