Cosmic exploration has repeatedly seen "highlight moments", and the 2020 Nobel Prize in Physics brings these surprises

China News Service, October 6 (Li Hongyu and Bian Lei) The heat that the Nobel Prize in Physiology or Medicine was announced has not dissipated. On the 6th local time, the 2020 Nobel Prize in Physics was also announced at the Swedish Academy of Sciences.   The 2019 Physics Prize winner was praised for "completely changing our perception of the world" for his research contributions in cosmology 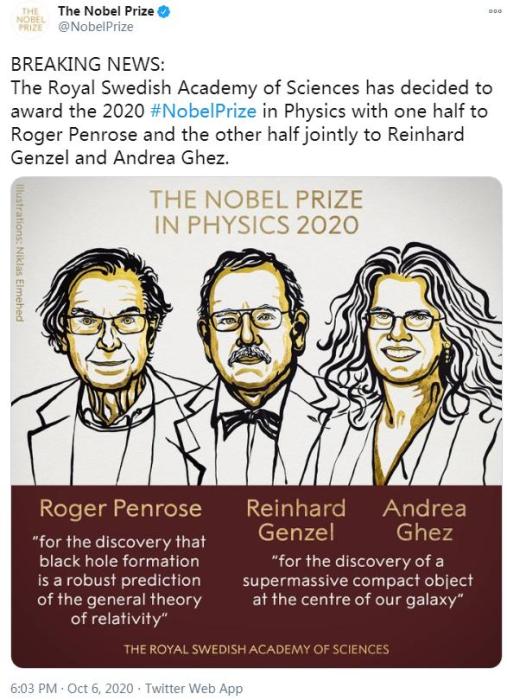 The 2019 Physics Prize winner was praised for "completely changing our perception of the world" for his research contributions in cosmology and related fields of extraterrestrial planets.

Half of this year's physics prize was awarded to British scientist Roger Penrose, and the other half to German scientist Reinhard Genzel and American scientist Andrea Ghez ), in recognition of their contributions to "black hole research and discovery of supermassive objects in the center of the Milky Way."

Nobel Prize 2020, focusing on the "deepest secret" of the galaxy

Today's Nobel Prize in Physics still focuses on the field of astrophysics, bringing us to discover another "high light moment" in universe exploration-black holes and the "deepest secrets" of the Milky Way.

These three scientists have made pioneering contributions in this field.

According to Nobel’s official website, Roger Penrose was born in Colchester, England in 1931. He was awarded the prize for discovering that the formation of black holes is a reliable prediction of general relativity.

Reinhard Genzel was born in Bad Homburg, Germany in 1952, and Andrea Goz was born in New York City in 1965.

The two scientists discovered the supermassive object in the center of the Milky Way.

According to the official website of the Nobel Prize, the groundbreaking discovery of the three of them provides us with the most convincing evidence so far that there is a supermassive black hole in the center of the Milky Way.

The German philosopher Kant once said that there are two things in the world that can most shock people's hearts. One of them is our "expansive and brilliant starry sky".

In the past 100 years or so, the Nobel Prize in Physics has witnessed mankind’s centuries of exploration, from the planet under our feet to the starry sky above.

The 2019 Nobel Prize in Physics was awarded to James Peebles, Michel Mayor and Didier Queiroz for their contributions to the universe and astronomy.

In 2019, as the award was awarded to the two fields of cosmology and exoplanetology at the same time, astrophysics as a branch of astronomy ushered in a bright moment.

Coupled with the neutrino oscillation in 2015 and the gravitational wave in 2017, in the past five years, astrophysics research results have won the Nobel Prize in Physics three times.

Researchers in the field of astronomy have repeatedly won the Nobel Prize, which was completely unimaginable half a century ago.

Because it was difficult to enter the Nobel Prize's "Dharma Eye" in astronomy research at that time.

It is precisely because the Nobel did not set up a special astronomy award, some astronomical discoveries that were not inferior to physics in scientific value in the past can only be discounted by the Nobel Prize "Vanity Fair."

A picture of Einstein's ring taken by the Hubble Telescope.

In the center of the picture is a galaxy cluster. Its mass is large enough to severely distort the space-time around it, forming a strange loop around the cluster. This is the Einstein ring.

Among them, Hubble, the discoverer of the expansion of the universe, may have missed the Nobel Prize for decades. It is the most regrettable.

This American astronomer not only established Hubble's law, which is considered a strong evidence of the expansion of the universe, but also known as the "father of galaxy astronomy."

In the winter of 1931, even the famous physicist Einstein crossed the Atlantic Ocean to the Mount Wilson Observatory on the west coast of the United States. Together with Hubble, he used the Hooker telescope to "see the stars."

After that, Hubble, who wanted to win the Nobel Prize, waited for another 22 years, but what was frustrating was that he died suddenly of a cerebral thrombosis one day in late September 1953.

At this point, there are only a few days left before the announcement of the Nobel Prize winner.

Fortunately, since the second half of the 20th century, the tendency of physics and astronomy to penetrate and merge with each other has become increasingly obvious.

New discoveries in astronomical observations and some outstanding achievements in astrophysics have further promoted the development of physics.

It becomes even more logical for astronomers with extraordinary achievements to receive physics awards.

A study in the "Journal of Physical Research" analyzed data from the Nobel Prize in Physics in 2017 and before and found that the proportion of astronomy has risen from a completely blank at the beginning to the current 7%.

In the future, there may be more scientists who won the Nobel Prize for their astronomy research results.

The picture shows William Shockley, one of the winners of the Nobel Prize in Physics in 1956. He and two other scientists shared the physics prize for their contributions to transistors.

The prestigious Nobel Prize in Physics is the highest honor for people to make outstanding contributions in the field of research.

When it comes to Nobel Prize winners, people often think of words such as inspiration and contemplation, and talk about celebrity anecdotes in order to find the secret of their success.

However, a key question that has always been lingering is: Can the experience of the Nobel Prize winner really be used for reference?

John Barding is the only one who has won the Nobel Prize in Physics twice in the same field. He was only 15 years old when he was in college; "Father of Quark" Murray Gellman has a wide range of research fields, except for mathematics and science. Outside the discipline, he is also quite proficient in natural sciences, linguistics, archaeology, psychology, etc...

In 2010, the Nobel Prize in Physics was awarded to scientists Andrey Heim and Konstantin Novoselov for their outstanding research in graphene materials.

But Nobel Prize winners may not always be outstanding.

Konstantin Novoselov, who won the 2010 Nobel Prize in Physics for his discovery of graphene, even learned physics a bit "difficultly" when he was in college.

And his mentor, Andre Heim, who won the same award in the same year, was rejected by a Moscow university because of his poor grades.

On the other hand, winning the Nobel Prize does not mean that all the views and research of the winners have been given a "halo of success."

Norwegian American physicist Ivar Jaefer won the Nobel Prize in Physics for discovering the tunneling effect in superconductors, but he denied that the earth was affected by global warming in any way; he won the Nobel Prize in physics for his invention of the transistor Shockley, who won the prize, once put forward a controversial theory of eugenics, which eclipsed his "Nobel Prize halo" a lot...

Perhaps, not "deifying" the Nobel Prize will help people get closer to science.

It is said that the principle of medical CT imaging is generally through the use of X-ray diffraction imaging.

Under the new crown epidemic, this year's "Nobel Prize Week" may be particularly concerned.

After all, solving the "new crown mystery" has become a major concern of the scientific community.

Many Nobel Prize winners came to the stage and stood up to challenge; many award-winning studies have been repeatedly demonstrated and practiced, releasing energy on the "anti-epidemic battlefield".

In April, Russian scientist Alexander Chucharin used a theory that won the Nobel Prize in Physics in 1978 and created a new crown treatment method to provide important help for early diagnosis.

At the same time, the former Physics Prize winners are also busy during the epidemic.

Since the outbreak in Canada, 2015 Physics Prize winner Arthur MacDonald has been busy driving with his colleagues. They want to produce a streamlined and easy-to-manufacture hospital ventilator.

Previously, Italy had designed a ventilator that was optimized for mass production, and they planned to modify the design to ensure that all parts and materials are easily available in Canada.

2010 Physics Prize winner Kostia Novoselov has also stated that he is studying smart antiviral coatings that will "intelligently" kill viruses adsorbed on the surface.

Right now, the epidemic is still raging around the world.

Regarding the new crown virus, mankind still has many puzzles to be solved urgently.

Fortunately, science never ends, and there is still light shining at the end of the tunnel.