Pope Francis: "It's bad when in the Church those in authority seek their own interests"

A fraternal society is one that promotes education in dialogue to defeat "the virus of radical individualism" and to allow everyone to give the best of themselves ", underlines the Pope in the encyclical" Brothers all ", signed yesterday in Assisi. and widespread today after the Angelus 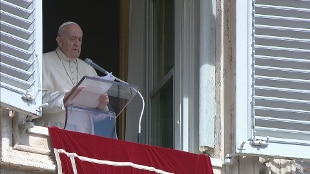 04 October 2020 “In every age, those who have authority in the people of God may be tempted to do their own interests, instead of those of God himself, even in the Church.

But the vineyard is the Lord's, not ours.

Authority is a service, and as such it must be exercised, for the good of all and for the spread of the Gospel ". Pope Francis said this before the recitation of the Angelus, looking out from the window of the study of the Apostolic Palace.

" It is bad to see when in the Church people who have authority seek their own interests ”, says the Pope.

"The signs of the times show that fraternity and care for creation are the only way to integral development and peace".

Pope Francis said this at the Angelus, placing his encyclical "Fratelli Tutti" signed yesterday in Assisi in full continuity with the social encyclicals of John XIII, Paul VI and John Paul II.

A fraternal society is one that promotes education in dialogue to defeat "the virus of radical individualism" and to allow everyone to give the best of themselves ", underlines the Pope in the encyclical" Brothers all ", signed yesterday to Assisi and spread today after the Angelus.

The Pope, commenting on the Gospel of the day, recalls that "Jesus, foreseeing his passion and death, tells the parable of the murderous tenants, to admonish the chief priests and the elders of the people who are to take a wrong turn.

These, in fact, have bad intentions towards him and look for a way to eliminate it ".

Francis explains that" the image of the vineyard represents the people that the Lord has chosen and formed with so much care;

the servants sent by the master are the prophets, sent by God, while the son is the figure of Jesus. And just as the prophets were rejected, so too Christ was rejected and killed.

At the end of the story, Jesus asks the leaders of the people: 'When then the owner of the vineyard comes, what will he do to these farmers?'

And they, taken by the logic of the narrative, pronounce their own condemnation: the owner - they say - will severely punish those wicked ones and will entrust the vineyard 'to other farmers, who will deliver the fruits to him in due time' ". Here is the moral: "With this very hard parable, - Bergoglio explains to the faithful in St. Peter's Square - Jesus places his interlocutors in front of their responsibility, and he does so with extreme clarity.

But we don't think this warning applies only to those who rejected Jesus at that time.

It is valid for all times, even for ours "." Saint Paul, - the Pope explains - in the second reading of today's liturgy, tells us how to be good workers in the Lord's vineyard: what is true, noble, just, pure, lovable, honored;

what is virtue and deserves praise, may all this be the daily object of our commitment.

Thus we will become a Church increasingly rich in fruits of holiness, we will give glory to the Father who loves us with infinite tenderness, the Son who continues to give us salvation, the Spirit who opens our hearts and impels us towards the fullness of good. "

The Pope has the Encyclical "Fratelli tutti" distributed

"Yesterday I was in Assisi to sign the new encyclical Fratelli tutti on brotherhood and social friendship.

I offered it to God on the tomb of St. Francis from which I drew inspiration as for the previous Laudato si.

The signs of the times clearly show that human brotherhood and care for creation form the only way towards integral development and peace, already indicated by the Holy Popes John XXIII, Paul VI and Young Paul II.

Today to you who are in the square I have the joy of giving the new encyclical in the extraordinary edition of the Or and with this edition the daily paper edition of the Osservatore Romano begins again so that St. Francis accompany the journey of fraternity in the Church among the believers of every religion and among all peoples ". Thus the Pope at the Angelus.

The crisis of 2008 was not used for an afterthought

" The financial crisis of 2007-2008 was an opportunity to develop a new economy more attentive to ethical principles, and for a new regulation of speculative financial activity and virtual wealth.

But there has not been a reaction that has led to rethinking the obsolete criteria that continue to govern the world ". Pope Francis writes this in his new encyclical, Fratelli Tutti, published today." On the contrary, it seems that the actual strategies developed later in the world have been oriented towards greater individualism, less integration, greater freedom for the truly powerful, who always find a way out unscathed ", he continues.