The explosive cyclogenesis Alex hits almost all of Spain with drop in temperatures and a storm of wind, rain and rough seas

The Atlantic storm Alex hits a large part of the peninsula and the Balearic Islands this Friday with a storm of wind and sea accompanied by generalized rainfall, more intense in e 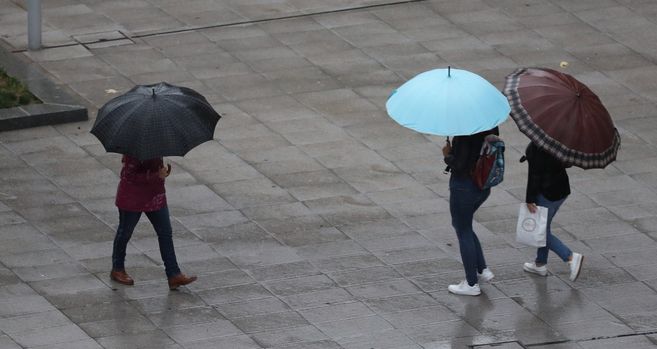 large part of the peninsula and the Balearic Islands

with a storm of wind and sea accompanied by generalized rainfall, more intense in the north, and a thermal drop of six to nine degrees in more than half of the peninsular territory.

Alex, which opens the 2020-2021 high-impact storm season, began this Thursday afternoon to rapidly deepen through

a process of explosive cyclogenesis

and will be located for several days in the English Channel, although it is this Friday when, According to the predictions, the most adverse effects will be noticed in Spain.

This abrupt change in weather due to

the first great storm of autumn

will be felt in most of Spain with various phenomena, which have forced the State Meteorological Agency (AEMET) to activate

warnings for rain, wind or bad seas throughout the Peninsula and Balearic Islands, as well as Melilla

In other words, the Canary Islands and Ceuta will be spared.

The prediction also points to western Andalusia and parts of Catalonia, Galicia and Extremadura as the places where these adverse effects are least likely to be noticed.

The most widespread phenomenon will be

, as very strong gusts are expected throughout the Peninsula and the Balearic Islands except for the southwest third and most of the Cantabrian and Pyrenean provinces.

"These gusts, first of the southwest component and later of the west and northwest, will exceed 80 km / h in a generalized way and

in points of Castilla y León, Community of Madrid, Castilla-La Mancha, Eastern Andalusia, interior of the Valencian Community and, in general, in high points of the interior ", has pointed Rubén del Campo, spokesman of the AEMET.

The wind will give rise to a maritime storm throughout the peninsular and Balearic coast with the exception of the Andalusian Atlantic, as well as in Melilla.

There are orange warnings (important risk, the second on a scale of three levels) on the coasts of A Coruña, Lugo, Asturias, Cantabria, Vizcaya and Guipúzcoa for the combined sea from the northwest with

, and the coast from the Balearic Islands and from Almería by waves of four meters.

In addition, this Friday will be

Rainfall will spread from west to east and is not expected to appear in Alicante, Almería, Huelva, Murcia, Seville and points in Extremadura.

persistent (40 liters per square meter in 12 hours) in Galicia,

the Cantabrian communities, northern Navarra and the surroundings of the Central System and the Sistema Iberian, especially on the north face of the mountainous areas.

On the other hand

will drop throughout the Peninsula and the fall will be noticeable in much of the southern half and in areas of the Northern Plateau.

Among the provincial capitals and autonomous cities, the greatest decreases will occur in Ciudad Real, Cuenca, Guadalajara and Teruel (nine degrees less than this Thursday);

On the other hand, it

"As temperatures will drop significantly, the snow will make an appearance after the passage of the front from about 1,200 meters in the mountains of the northern half of the peninsula," explained Del Campo.

156 deaths from coronavirus in the last 24 hours raise the official figure above 30,000 deaths

EconomyThe hotels charge against the Government for liquidating the Imserso: "They give no alternative"