The White House has staff and equipment for first aid and medical examinations, but as symptoms worsen, the president would be flown to the hospital. 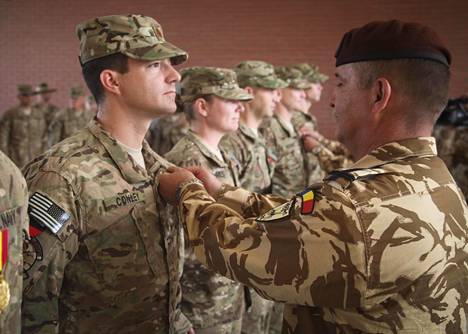 Following President Donald Trump’s positive coronavirus test, the White House has so far not commented on exactly how the president’s health is being monitored.

His personal physician, Sean P. Conley, said in a statement that he believes the president will continue to hold office at the White House.

According to Conley, the president and first lady Melania Trump are fine.

The president and Mrs. Trump have said they intend to quarantine the White House.

They have spacious private apartments at their disposal.

Possible restrictions on movement inside the house have not been reported.

Normally, there is a White House medical team near the president all the time, which includes several nurses and doctors.

Because the president is also the commander-in-chief of the military in the United States, the members of the medical team are usually also military medical personnel.

In addition to the President, they also provide medical services to the Vice President and White House staff, as well as, for example, House dignitaries in an emergency.

For a couple of years now, Sump P. Conley, a naval officer with the rank of commander, has been responsible for Trump's health.

He has his own office in the White House near the Presidential Office, the Oval Office.

The White House is also said to have a small medical room and first aid unit.

The White House is also said to be equipped with a small medical room and first aid unit, but no recent information is available on their equipment.

It has been reported in the past that there is always a rapid availability of first aid medication and resuscitation equipment.

If the president becomes seriously or suddenly ill, he is rushed to hospital.

For decades, presidential-level care for U.S. heads of state has been provided by Walter Reed Military Hospital, where Trumpkin has undergone medical examinations.

Also in Trump’s case, it can be assumed that if he gets severe coronary symptoms, he will be promptly referred for treatment right there.

The president’s personal doctor has an important role to play in a situation where the president becomes seriously ill.

He will assess the performance of this after consulting any other experts.

However, according to Appendix 25 to the Constitution, the transfer of powers to the Vice President is decided by the government of the country.