Marsala, violent raids against immigrants. Investigators: "It was a real commando"

The youngest of the three arrested is 18 years old. The police are looking for other people who certainly were part of the pack 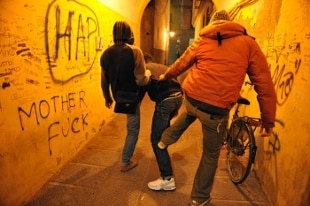 01 October 2020A blind fury, merciless and generated by racial hatred.

Stopped by the Marsala Police, with the agents of the Digos of Palermo, three people who were part of the herd that targeted foreigners.

They picked them at random, then slaughtered them with blows and kicks.

Real punitive raids during which they also used bottles found on the ground and chairs.

The pack went hunting on weekends.

The arrested and the accusations

3 components of the "commando"

They are accused, in various ways, of private violence, threats, personal injuries.

Crimes aggravated, according to investigators, by the use of blunt instruments, acting with "brutality and ruthlessness and for the purpose of discrimination or racial ethnic hatred".

The precautionary measure came after a complex investigation into some attacks that took place in the center of Marsala during the summer.

For the investigators they would have been "real punitive raids against unarmed non-EU citizens who suffered the physical and verbal violence of the criminal group for no apparent reason".

The beatings and insults

The "herd" in addition to beating foreigners insulted them "blinded - tell the investigators - by a beastly, unmotivated rage, made even more deplorable by the phrases that praise racial hatred", such as "

you must no longer speak because you are color ... we'll kill you, here you have no right distare

the silence of the victims

Assaults so brutal to intimidate victims who did not go to the hospital and they were locked in a silence of fear.

The three arrested, are ultras fans of the 'streetboys / rebel core' of Marsala Calcio and already subjected to Daspo. During the search of the 18-year-old's home, the police found a semi-automatic pistol without a red cap with its magazine, brand Bruni, "New Police" model cal.8 mm K, 9 blank cartridges cal.8 mm and 1 cartridge cal.7.75.