Kalervo Kummola tried to get Mikael Granlund to stay in Kärppi in 2009, but the super talent who had just turned 17 kept his head cold. The agent recalls a colorful call. 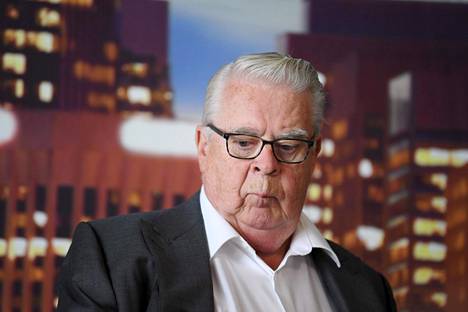 One of the big topics of the Finnish hockey season in 2008–2009 was the transfer of Mikael Granlund, a super-talented striker who was not known to the general public at the time, from the Oulu Fly to IFK in Helsinki.

From there, the current superstar and national hero continued into the NHL in 2012, where his career still continues.

Oulun Kärpät was furious about the transfer and considered Granlund to have left despite the valid player contract.

However, for several reasons, Granlund also wanted to change the scenery himself;

there was a lack of trust between him and the Flies for several reasons.

Larva recalled the twists and turns of spring 2009 in an update to her LinkedIn profile on Sunday.

He was inspired to write a recent biography of Kalervo Kummola, former chairman of the Hockey Association, also known as the Iron Chancellor, written by Jari Korki, Kale (Otava).

Larva has known Kummola practically all his life, as his father, the late hockey influencer Martti Larva, was a close friend and colleague of the hockey giant.

Kalervo Kummola had to humble himself. Photo: Jussi Nukari / Lehtikuva

Loudly praising the biography, Larva, now a super-heavyweight player with several NHL and KHL star customers, announces on LinkedIn that she is telling her own Kale story - and asking permission from those involved.

The flies had reportedly contacted Kummola, the then chairman of the Hockey Association, in 2009 and asked him to use his significant influence to stop the noise transfer.

Larva talks about how her phone rings on spring winter day 2009.

- What are you doing with Granlund now?

Ilkka hey, that boy stays in Oulu, Kummola informed the agent, who replied that a sequel in Oulu is out of the question.

- Did you hear what I said?

That boy stays in Oulu and it's clear, Kummola continued.

Larva's answer was as follows:

“Mikke” is next to that and you can definitely tell it better than I do.

Larva gave a telephone conversation to Granlund, who had just listened to the page and had just turned 17, and stated that Cummola was coldly calm:

- I don't play in Flies anymore.

When Larva got her phone back from Granlund, Kummola's attitude had changed:

- It's not playing in Kärpi anymore, the Iron Chancellor admitted and the call ended.

Ilta-Sanomat reached Larva, who rarely appeared in public on Sunday night, to comment on his update.

- Of course Mikke knew who Kalervo Kummola is and what kind of man he is in Finnish hockey.

He was talking to Kale back then, to my knowledge, for the first time.

I wanted to write a story to describe Kale’s style of solving things and also because more people in the entertainment business would read that book.

Namely, it helps to understand this field very well and its straightforward ways of working, Larva said.

In the spring of 2011, Granlund was a star player in both the league gold-winning HIFK and the World Cup gold-winning A national team.

Granlund, who is next in the national team for the ninth NHL season, has also achieved World Cup silver and Olympic bronze.

The HIFK transfer was no longer a topic of conversation when Kalervo Kummola (left) and Mikael Granlund stabbed in Korea after the Lions returned from the Bratislava Games as world champions. Photo: PETER JANSSON