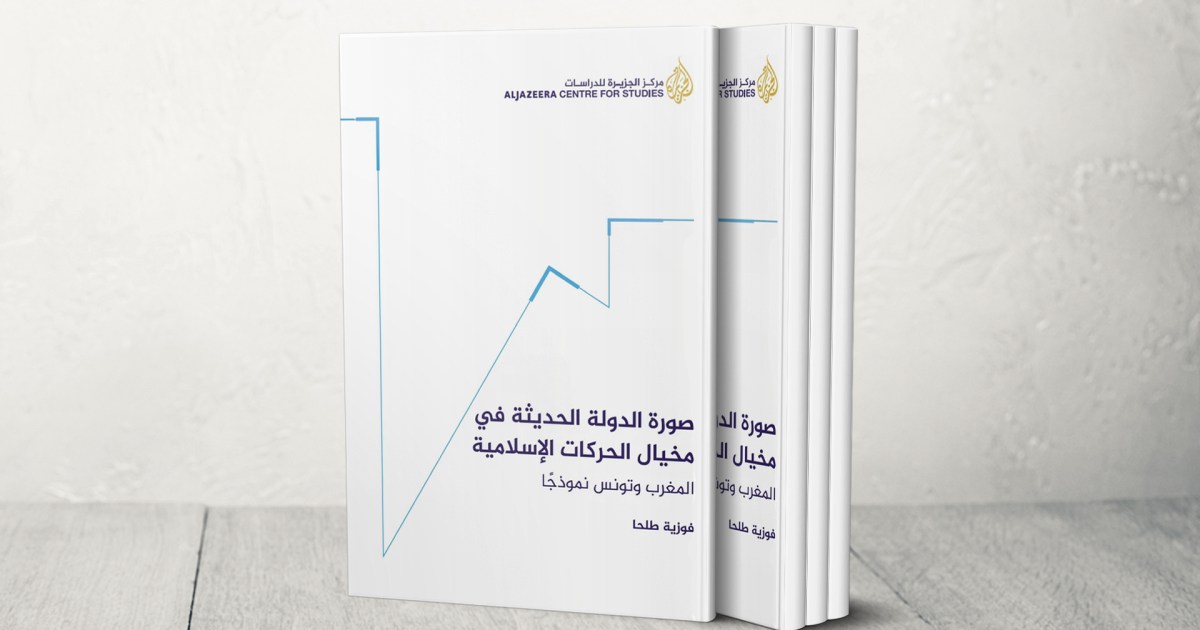 Al Jazeera Center for Studies has released a new book in digital format, entitled "The Image of the Modern State in the Imagination of Islamic Movements Morocco and Tunisia as a Model", by Dr. Fawzia Talha.

The book deals with, by monitoring, analyzing and comparing, the image of the modern state in the literature of the Moroccan “Unification and Reform” movement and the Tunisian “Ennahda” movement, before and after their participation in government.

The book raises a number of questions, the most prominent of which are: What does the image of the state look like in the imagination of the thinkers of these two movements and their leaders ?, What has happened to this image of change after going through the midst of political work and the experience of participating in governance? And to what extent did their theoretical discourse approach or diverge from implementation after standing up? Practically on the complexities and challenges of the modern state?

The reason for the author’s choice of the Moroccan “Unification and Reform” movement with her “Justice and Development” party, and the Tunisian “Ennahda” movement are two models for the study, because they represent - according to what is stated in the book - a moderate moderate approach, especially after their intellectual reviews and their tendency towards reconciliation with the state Modernity, and their belief in reform from within the institutions of this state not from outside.

The political experience of "unification and reform" and "renaissance" - the author adds - constituted a real test for their discourse and representations about the state, especially after they had the opportunity to participate in government after the Arab Spring revolutions, as they closely experienced the nature of the modern state, and realized what it really is. Adapt to its principles and institutions.

The experience of participating in governance has also placed these two Islamic movements in front of two major challenges - according to the author - the first is to test their ability to download their Islamic vision in politics and life in general to a state founded on modernist foundations.

As for the second challenge, it is represented in testing the extent of their ability to succeed in running state institutions in light of the control of moral and religious discourse over their literature, as well as in light of the peculiarity of the ruling system in both countries, Morocco and Tunisia.

This is why the author concludes that the Islamists ’experience in governance is tempting to engage in research and exploration in the literature of these two Islamist movements, in order to know the features of the mental image that their thinkers and their outlooks on the modern state drew, and to identify the strengths and weaknesses in it, and the possibilities of downloading these perceptions and those visions on the ground. In addition to monitoring the development of the discourse of these two movements towards reconciliation with the modern state, and measuring the extent of their success in harmony and accord with the modern state, whether at the level of discourse or practice.

The author, Fawzia Talha, is a Moroccan professor and researcher in Islamic political thought. She holds a doctorate in philosophy and Islamic thought from the Hassan II University in Casablanca. She has published many studies in various educational and political fields. She also published a group of story creations and participated in international and national seminars.

The book can be viewed and downloaded through the link.

The author said that the issue of the state, its form and nature is of great importance in contemporary Arab thought, because the change in the features of the Arab region was linked to the change in the form of government and the state, especially after the fall of the caliphate and the confirmation of the model of the modern Qatari state that was distinguished by its simulation at the level of the form of the Western state model.

In the introduction to her book, the author divided the Islamic movements whose main project aimed at restoring the rule of Sharia that had been plagued by the secularism of the modern state, into two types of movements, namely the dreaming movements in her literature by reproducing the model of the rule of the caliphate, while the modern Qatari state was viewed as a separate model for the unity of the Islamic nation, which made it reject it In form and substance.

The second type includes dreamy movements building a model of the modern Islamic state that simulates at the level of form the Western model of sovereignty over a specific geographical area recognized by the Qatari system, but is inspired at the core by the values ​​of the Islamic religion, yet at the same time it is keen to conform to the principles of modernity in harmony with The Nature of the Modern State.

The author believes that the Moroccan Unification and Reform Movement and its Justice and Development Party, and the Tunisian Ennahda Movement, are two examples of the second type, which she considered to represent moderation and moderation.

The author referred to previous studies that dealt with the issue of Islamists' relationship with the modern state, including Wael Hallaq's book "The Impossible State", in which he monitored the possibilities of accepting or establishing the Islamists for a modern state, to arrive at conclusions, the most important of which is the impossibility of achieving this because the nature of this state and its modernist foundations contradict what Islamic thought theorized for him for many years, and what is blamed in this study is that it closed the door to any attempt to establish a modern Islamic state.

Kuwaiti author and politician Ismail Al-Shatti also addressed the same relationship between Islamists and the state, through his book "Islamists and the Modern State", in which he explained the challenges and difficulties facing Islamists in ruling the modern state, focusing on the Western international community controlling the affairs of Arab and Islamic countries and their various policies.

The author considered that Al-Shatti's study was distinguished by a serious and sound presentation of the real obstacles facing Islamic currents in the rule of the modern state, yet she criticized the tyranny of what she considered a spirit of surrender to reality without offering any convincing alternative to overcome these challenges and obstacles.

The author stated that the approach adopted in her study is the descriptive and analytical method, to monitor the studied phenomenon from all sides, scrutinize and examine it, where the discourse that reflects the representations of the Islamic movements of the modern state, whether oral or written, is analyzed from its original sources, in addition to activating the comparison mechanism to produce results. Important scientific.