Column: Ruukki, which has been operating for 300 years, was closed down from the Taalintehdas, Naantali is now losing the refinery

The production plant, founded in the 17th century, employed 1,200 people 50 years ago, so the bankruptcy broke down the Taalintehdas badly, writes Riika Kuuskoski, who moved to the archipelago for two months. 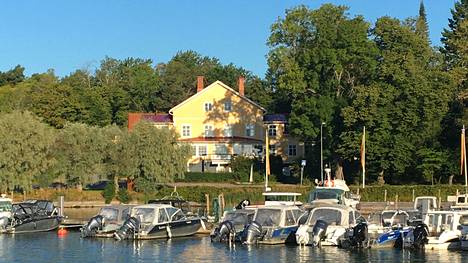 Mom left for the island.

A woman in her fifties from Helsinki moved to Kemiönsaari for a two-month internship.

The children and dogs stayed home with their father.

This is the third part of the series.

A month at the Taalintehdas has made me so archipelago that the news of Neste's plans to close its refinery in Naantali scratched deeply.

A small archipelago town like this one, very dependent on one employer, a big blow to people.

The Taalintehdas already experienced it.

In 2012, the production plant, which had brought livelihood to the village since 1686, went bankrupt. The Swedish Mountain College then gave permission to establish a blast furnace in the “Crown Village of Taali in Finland”.

On the Swedish side, there were no longer enough deciduous trees to burn to get the lake ore smelted and the iron separated.

This is where it all started.

Then came the wrought iron hammer, the wrought iron foundry and the manufacture of articles from wrought iron, rolling, scraping, labor shortages, housing construction for workers and the whole community revolving around the factory, school, hospital, bakery, market, slag brick church, which was also a factory sold out only in 1978.

Wärtsilä acquired Ruukki in the 1930s.

The first owners had been merchants from Stockholm, and Plootu-Mikko's relatives settled on Kemiönsaari as cartridges.

In 1870, ownership passed from the Ramsay family to a businessman in St. Petersburg and eventually as a limited company to Wärtsilä.

In 1979, the factory came under the control of Ovako and then to FNSteel, which has a hut in the Netherlands.

The church of the Taalintehdas was also the property of the factory.

Wärtsilä sold it to the parish in 1978. Photo: Riga Kuuskoski

The premises of the closed factory at Taalintehtaa include a pleasure boat dock. Photo: Riika Kuuskoski

At the same time, automation began to drive jobs down - while production volumes exploded.

At the Taali factory, iron wire rod was made, which could be used for anything, from safety pins to bridge wires.

In the final phase, 300 ships visited the port each year to pick up yarn for the world.

As early as the 17th century, the strength of the Taali factory was its good natural harbor, an eight-meter fairway, near the open sea route.

The coal furnaces are right opposite the Taalintehdas guest marina. Photo: Riga Kuuskoski

Did the closure of the factory come as a surprise?

Many say it came, but there were warners.

Gösta von Wendt, a member of the Ramsay family who owned the factory in the 19th century, who bought the Björkboda manor in the 1980s, was soon dragged to Kemiönsaari after changing to municipal policy.

He says he warned that the locality is too dependent on one company.

More business was created, such as the Kasnäs spa, which expanded from a fish farm to a hotel.

It is now the municipality’s largest private employer.

The family of entrepreneurs who ran the fish processing factory expanded their business to a spa hotel in Kasnäs. Photo: Riga Kuuskoski

Many believe that the material in Taalintehdas will be the new Hanko, as long as an even larger number of domestic tourists find a summer village where the charm of old wooden houses is combined with the history of the blast furnace and the atmosphere of the sea.

The guest marina was established in the 80s and immediately caused a commotion in the sailing circles.

The then municipal councilor, Leif Lindgren, recalls sitting in the harbor for the first summer as a watchdog, having once proposed a guest marina.

The masts of the sailboats against the rugged factory building thrillly create a bridge between dredging and luxury, the elite and the proletariat.

The old factory is being refurbished and half of the premises have already been leased, said the local Annonsbladet.

Grain and timber are exported from the port.

On an annual basis, there are 25–30 ships, the magazine says.

Naantali did not get an oil refinery until 1957 and has a foothold elsewhere as well.

For example, Naantali Spa is a big employer, the picturesque little town with its Moomin worlds has been attracting tourists for a long time.

I hope the bangs are enough.