Normalization agreements ... and the complications of annexing lands in the West Bank

The White House has issued 3 texts containing the 'Abraham Accords'. Between Tel Aviv, Abu Dhabi and Manama, the bilateral normalization agreement between the UAE and Israel, and a copy of the Bahrain agreement, but the texts ignore the Palestinian issue. 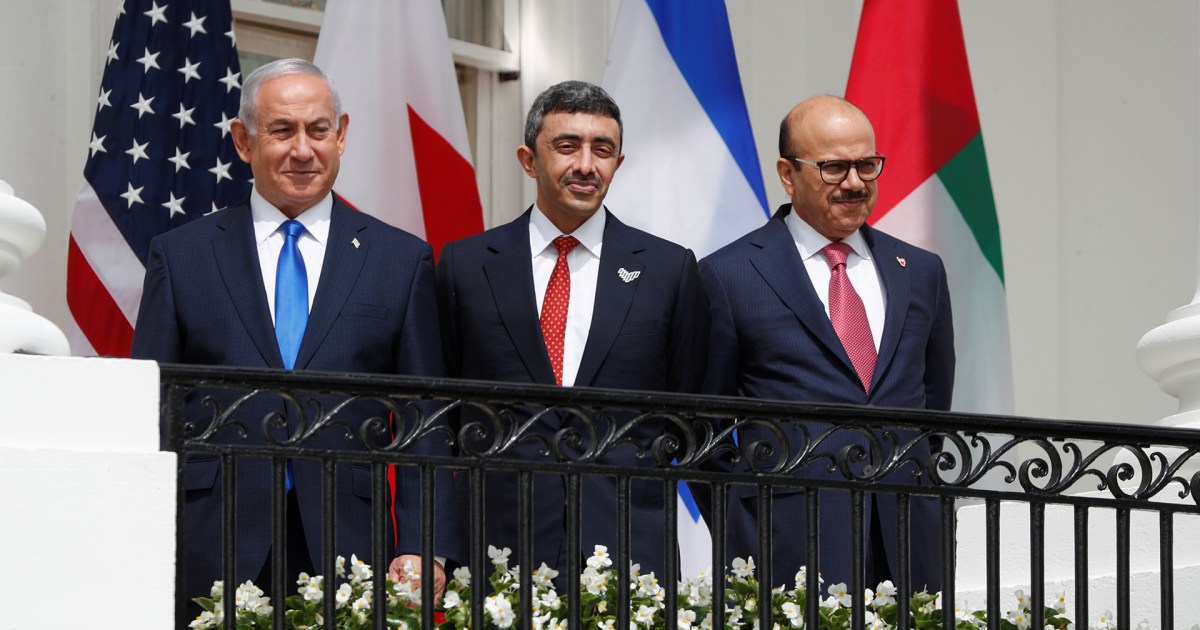 The White House has issued 3 texts that include the text of the declaration of the "Abraham Accords" between Tel Aviv, Abu Dhabi and Manama, the text of the bilateral normalization agreement between the UAE and Israel, and a copy of the Bahrain agreement with Israel.

The agreements were based on establishing full diplomatic relations and joint cooperation in several areas with Israel. However, they did not mention that Israel is obligated to stop the annexation of the occupied Palestinian territories, or even postpone it.

Ignore the Palestinian cause

Neither document contained an indication of Israel's commitment to stop the annexation of the occupied Palestinian territories, or even to postpone them.

It was clear that the agreements signed last Tuesday related to bilateral relations between their parties, and did not address the Palestinian issue.

Hadi Omar, a former US official in the administration of former President Barack Obama, who has Arab origins, said that the agreements represent a "shift in Arab-Israeli relations. Today there are a number of Arab governments that want to bypass the Palestine Liberation Organization and build direct relations with Israel that suit their interests."

In a series of tweets, Omar stressed that what happened is a clear win for Israeli Prime Minister Benjamin Netanyahu, as the deals also seem to be financially profitable for Israel in the near future, while he considered that the UAE and Bahrain are no longer directly linked inside Washington with Saudi Arabia, mired in its problems in the American capital. ".

Two: But does this represent a shift in Arab-Israeli relations?

A number of Arab governments are now willing to bypass the PLO and build relations directly with Israel that suits their interests.

Are there confidential items?

For her part, the Speaker of the US House of Representatives, Nancy Pelosi, who did not attend the decrees of the normalization agreements between the UAE, Bahrain and Israel at the White House, said in a televised interview that she wanted to know the details of the agreements related to the announced freeze on annexing parts of the occupied West Bank to Israel, referring to a decision Supporter of the two-state solution, approved by the US House of Representatives and discouraging unilateral annexation.

However, an Arab diplomat working in Washington spoke to Al Jazeera Net on the condition of anonymity, ruling out the existence of secret clauses related to the agreements signed between Israel and the UAE and Bahrain.

The Arab diplomat said to Al-Jazeera Net, "I rule out that there will be any secret texts related to Netanyahu's plan to annex lands from the West Bank. The annexation has been postponed pending the fate of the American elections, and to encourage the two Arab countries to normalize quickly, if circumstances change in Washington and inside Israel, Netanyahu will present his plan without any concern for anything." Arab reactions. "

In response to a question from Al-Jazeera Net about the nature of the tripartite agreement, which was brief and on one page, the Arab diplomat considered that "the tripartite agreement signed by the three countries in addition to the United States speaks only in diplomatic language about the hopes and benefits of peace and regional cooperation, and it did not mention any details or plans." Specific action towards any issues. "

The annexation is coming despite the agreement

In an interview with Al Jazeera Net, Charles Dunn, a former National Security Council official under President George W. Bush, predicted that "Israeli Prime Minister Benjamin Netanyahu will proceed with the annexation as soon as this is diplomatically possible or politically beneficial. It could be months, maybe more," Perhaps less, but the reality of normalization with the Emirates and Bahrain does nothing at all to remove the annexation from Israeli considerations. "

Dan pointed out that "the normalization agreement has no relationship whatsoever with the Palestinians, except to deepen their isolation and further expose the fallacy of the two-state solution."

Dan told Al-Jazeera Net that the agreement, to the extent that it ignores this basic issue, removes the Palestinian issue from the list of issues that the signatory countries are interested in.

While Richard Goodstein, one of the officials in the Middle East peace process file under former President Bill Clinton, indicated that, in general, he believes that "any agreement that commits countries to normal relations is a positive agreement."

In an interview with Al-Jazeera Net, Godstein indicated that "the agreements do not do anything clear to bring the Palestinians to the negotiating table, except for temporarily removing the annexation of the West Bank areas from the equation."

"If President Donald Trump wins, then everything is possible. If Joseph Biden wins, as I expect, I hope that Israel has the wisdom and does not take steps to move forward with annexing the West Bank," Godstein emphasized.