The movement from the far-right world of the United States has swelled and absorbed more alternative thinking. 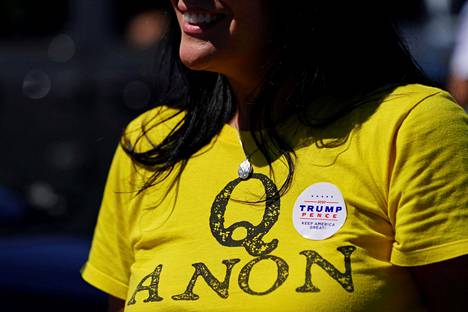 The pedophile conspiracy, which ritually murders children, rules the world.

The corrupt power elite controls governments, the media, and Hollywood.

The QAnon worldview is suddenly reminiscent of many other U.S. conspiracy theories that internet cancers are in full swing.

For some reason, however, the number of people who believe in QAnon has grown rapidly in recent months, and Q symbols have begun to appear in demonstrations in Finland as well.

What is it about?

Why has the phenomenon got under its wings?

One of the main reasons is the corona pandemic, says Janne "Rysky" Riiheläinen, a security policy commentator familiar with information influencing, who has been following QAnon closely.

- It was on a growth path before.

Then came exceptional circumstances and a pandemic that made people fear and suddenly gave terrible time.

I am very convinced that it is a key factor in the spread of strong, Riiheläinen says the Finnish News Agency STT.

Another important element is digitalisation.

QAnon is a digital phenomenon in the spread of which videos and memes are key tools.

Conspiracy theory is also linked to distrust of the media.

- I see this as part of a broader change in the nature of information, called the post-truth period or something else.

This involves digitalisation, which creates an instrumental basis for this way of working and perceiving the world.

Trump is the Messiah of QAnon

Like many network phenomena before that, QAnon originated from the image sharing and chat site 4chan.

It happened in October 2017, when the mysterious nickname Q began to publish so-called drops, messages written in a certain kind of code language that are believed to give clues about the big plan and upcoming events.

Conspiracy theory, in its brevity, is about believing that the world is in the possession of a corrupt, satanic power elite.

This power elite engages in pedophilia on a large scale and ritual murder of children.

However, a so-called storm is coming, in which the hero of the QAnon people, US President Donald Trump, will lead the forces of good against evil.

The hero of the QAnon people is US President Donald Trump.Photo: Mandel Ngan / AFP / Magazine

Proponents believe behind the nickname Q to be found one or more individuals in senior positions in the Trump administration and military intelligence.

Not everyone thinks the same

QAnon has strong roots in the world of the U.S. far right, alt-right, and trumpism.

As it grows, however, the movement has changed somewhat, and the spectrum within it has grown tremendously.

- Now it has developed in such a way that astrologers and health gurus from all over the world have joined, Riiheläinen describes.

Indeed, QAnon has absorbed a large number of other conspiracy theories, and not everyone who believes in QAnon may think the same way.

According to Riiheläinen, where the traditional conspiracy theorists are often a bit isolated and more technical, QAnon has appealed to several different target groups.

- These new ones are cheerful ordinary people who for some reason have left for this, for example middle-aged women.

The stories appeal in Finland as well

QAnon has also gained a foothold outside the United States, although the core of the phenomenon is linked to U.S. politics and President Trump.

Postdoctoral researcher Niko Pyrhönen from the University of Helsinki does not find this surprising.

- The contents of theories and stories are quite easily localized to different places.

For example, the idea that the political elite is corrupt and that government decisions are made in cabinets, political decision-makers are globalists and corrupt decision-makers in different places are interconnected, Pyrhönen says.

In Finland, too, some right-wing politicians have flirted with QAnon by sharing related content on Some.

Pyrhönen thinks that many celebrities and politicians who directly or indirectly support QAnon want to harness QAnon's supporters as their own followers.

- Many fish in several waters at the same time.

They support QAnon a bit and say that QAnon has some pretty good points.

The kind that fit your own brand, image and message.

Participatory as a feature

According to Janne Riiheläinen, QAnon can also be viewed as an extremely exported populism, in which the black-and-white worldview has been stretched into a battle between good and evil.

- It is no wonder that in populist movements in particular, this has had the most leverage.

Democracy involves compromises, while QAnon, like many conspiracy theories, is completely uncompromising: evil rules and must be beaten.

What makes QAnon exceptional is its inclusion.

In traditional conspiracy theories, the role of believers is quite passive, but QAnon’s Followers themselves are actively involved in interpreting Q’s drops and thereby shaping the thought structure.

That is why Riiheläinen prefers to call QAnon a movement or a movement instead of a conspiracy theory.

- It illustrates that it is not just a structure of doctrine or vision, but specifically someone who aims for something.

We just don't really know where.

So far, there is a mystery as to why QAnon was started and who is behind the drops.

However, in Riiheläinen's opinion, based on the initial stage, it seems that the aim was to market QAnon systematically and purposefully.

- Those things were advertised and drops suitable for different target groups were put on.

Then, after all, we got to Infowars (the conspiracy theory site), which distributed it to all the people in the scene.

Niko Pyrhönen, on the other hand, believes that QAnon took shape when people tried different ideas on the internet's scoreboards and saw what kind of reactions arose.

- People who had an interest in harnessing it for political use only really became interested when it started to reach a critical mass in online forums of a smaller district.

With a view to elections?

The watershed for QAnon is the November U.S. presidential election.

Riiheläinen believes that the whole thought structure may have been developed with a view to electoral influence.

Speculation has arisen as to whether QAnon could play a role in a situation where the potential election outcome remains unclear and the United States drifts into a chaos of recounting of votes as well as lawsuits.

It is still difficult to assess whether QAnon’s increased supporters will have a practical impact on election results.

According to Pyrhönen, there is a general distrust of traditional media authorities, the media, scholars, and the idea of ​​political liberalism in general.

In this way, it can promote agendas driven by the radical right and nationalists in particular, Pyrhönen analyzes.

In the U.S., QAnon is already estimated to have millions of followers, and Trump can’t afford to anger such a large number of loyal supporters when the election may be resolved with small numbers of votes.

According to Riiheläinen, any traditional politician would have cut off the wings of QAnon rumors a long time ago, but not Trump, who might see some kind of instrumental value in the movement.

If Trump tried to quit QAnon now, it would have little effect.

Is the movement fading?

Riiheläinen believes that Trump's loss or even election victory will halt QAnon's growth in the longer term.

However, he does not believe that the movement will disappear completely, but will become smaller and more compact.

- The basic narrative here is the struggle between good and evil, and it is assured that good will win, the storm will come and so on.

It is probably said that evil won this battle, but the battle continues.

Pyrhönen thinks that Trump was chosen as a kind of pre-fighter for QAnon, mainly for practical reasons, because it was convenient to connect the thought structure to the most influential person in the world.

- I don't think Trump is so central to QAnon's content.

Trump is quite interchangeable.