Yesterday, the army and tribes forces, with the support of the Arab Coalition to Support Legitimacy in Yemen, continued their advance on the Al-Jawf, Saada, Ma'rib and Nehm fronts, and liberated strategic areas after battles that left dead and wounded among the Houthi militia, and with the continuing battles on the Dhali fronts, the militias escalated 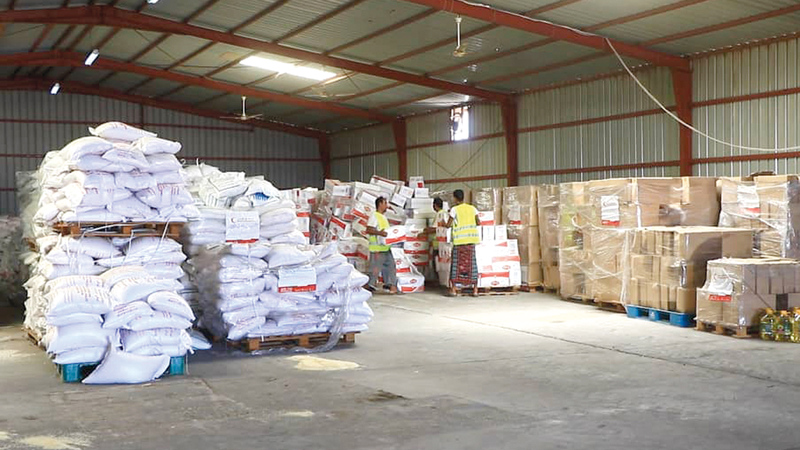 Battles in the north and west of Al Dhale'e ... and Houthi violations of the UN armistice

The Emirati aid ship docked at the port of Mokha, carrying tons of foodstuffs.

Yesterday, the army and tribes forces, with the support of the Arab Coalition to Support Legitimacy in Yemen, continued their advances on the Al-Jawf, Saada, Ma'rib and Nehm fronts, and liberated strategic areas after battles that left dead and wounded in the ranks of the Houthi militia. For the international truce on the fronts of the West Coast.

In the details, field sources in Al-Jawf confirmed that the Yemeni army and the tribes, with the support of coalition fighters, were able to liberate new areas in the east of the city of Al-Hazm, the capital of the governorate, and they reached the Shahla area in the depth of the Nudd desert, which large parts of which were liberated, indicating that the army and the tribes were imposed. A siege is imposed on Houthi elements in eastern Al-Hazm after the implementation of a successful detour and cutting off supply lines from them.

The sources confirmed that the army and the tribes were able to liberate 30 km east of Al-Hazm and control the main supply routes in the areas between Al-Hubail, Al-Sabayegh, Al-Nudud and Hawishian, and Houthi groups are now besieging separate areas east of Al-Hazm, including Al-Labnat camp.

In Saada, the army forces backed by Arab coalition fighters were able to liberate strategic and ruling positions in the Al-Buqa front in the Ketaf district after launching a counter-attack on the Houthi militia that tried to advance towards Jabal Rashahah, according to field sources, confirming that the army forces liberated several doors on the road linking the spots And the district center of Kettaf.

The sources stated that the Al-Tawhid Brigade of the legitimacy was able to secure Tabab and large parts of the international road, and continued its bombing of militia sites that fled to the sites of Jabal Mahjouba and Mount Morek.

In the Marib-Al-Bayda axis, the army and tribes continued their advance on the fronts of the Mahli, Rahba, and Al-Abdiya districts south of Ma'rib and adjacent to the Al-Bayda governorate, at the expense of the Houthi militia, which suffered great losses, while the Al-Narcara front in the west of the governorate witnessed the fiercest battles between the two sides that led to the liberation of sites Several in the area, according to field sources.

The sources stated that the army and the tribes backed by the Arab coalition made new field advances yesterday in the Al-Khadkara front of Sarwah, and regained locations where the Houthi fighters were stationed, after battles that left dead, wounded and captured Houthi groups, including prominent field leaders.

The sources indicated that 27 Houthis surrendered to the army and the tribes in the Al-Khadkara front, including two prominent field leaders, while the coalition fighters were able to destroy Houthi combat vehicles in the area.

In Mahliya, south of the governorate, the army and tribes were able to carry out a tight ambush by the Houthis, which resulted in the death of 25 Houthis, while the coalition fighters bombed Houthi reinforcements.

In Al-Dhalea, the artillery of the joint forces bombed Houthi militia sites in the west of the Qataba district in the north of the governorate, which led to the destruction of Houthi fortifications and vehicles, and left dead and wounded among the Houthis, and the artillery targeted Houthi sites in the Najdiyah area and Habeel Al-Abdi, west of Al-Fakher city in the western sector of Qataba.

The joint forces also bombed Houthi sites in the Marish sector, in the north of the governorate, killing 30 Houthis during the past two days.

In Hodeidah, the Houthi militia renewed its bombardment of a fixed Brotherhood compound in the city, as well as bombed the Mashhad neighborhood and the residential city of Al-Saleh in the context of its daily breaches of the UN armistice, and a source in the joint forces said that the militias continued to target residential and industrial areas in the city with various types of weapons.

Yemeni army forces and tribes managed to shoot down two Houthi drones in the sky of Marib.