"Primitivization of foreign policy": the Foreign Ministry responded to reports about the possibility of US sanctions over Belarus

Russian Deputy Foreign Minister Sergei Ryabkov commented on reports of the possibility of the US imposing anti-Russian sanctions due to the situation in Belarus. He noted that it is not the first time that Washington has intervened in the affairs of other states "in the most unceremonious and rude manner," and pointed to the primitivization of the American foreign policy course. As Reuters previously reported, citing an "anonymous spokesman" for the State Department, the United States may consider imposing sanctions on Russia if Moscow "openly interferes in the affairs of Belarus with the use of force." 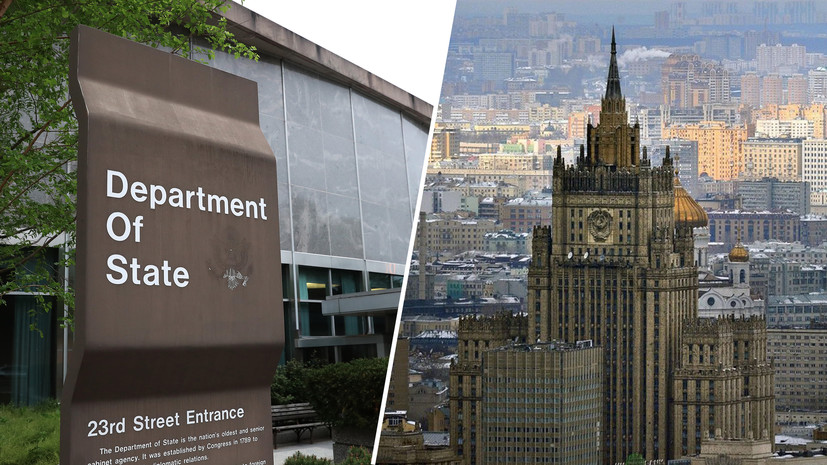 Russia does not interfere in the affairs of Belarus and respects the right of residents of the republic to independently figure out their problems, said Russian Deputy Foreign Minister Sergei Ryabkov.

Thus, he commented on reports about the possibility of the United States imposing anti-Russian sanctions due to the situation in Belarus.

“The Americans should not give warnings to anyone, but take care of giving the Belarusians an opportunity to get out of this situation as they see fit,” RIA Novosti quoted him as saying.

According to him, it is not the first time that Washington has intervened in the affairs of other states "in the most brusque and rude manner."

“We are convinced again and again that there is nothing left in the American foreign policy instruments except sanctions,” the Deputy Minister of Interfax quotes.

He expressed regret that "the primitivization of the American foreign policy is taking place."

“And there is only one answer to any question, to any problem - sanctions,” Ryabkov concluded.

Earlier, Reuters, citing an "anonymous spokesman for the State Department," reported that the United States may consider the possibility of imposing sanctions on Russia if Moscow "openly interferes in the affairs of Belarus with the use of force."

According to the "anonymous official", at a meeting with Foreign Minister Sergei Lavrov, US First Deputy Secretary of State Stephen Bigan "made it clear that US-Russian relations would have consequences if the Russian side openly intervenes in the affairs of Belarus by force."

In addition, an "anonymous source" of the agency said that the United States is considering the possibility of sanctions against seven citizens of Belarus, who, according to Washington, are involved in "rigging the presidential elections on August 9" and "violence against peaceful protesters."

Let us remind you that presidential elections were held in Belarus on August 9, in which, according to the country's CEC, the incumbent head of the republic, Alexander Lukashenko, won.

After the announcement of the preliminary results of the voting, residents of Belarus, who did not agree with the results of the elections, began to protest.

At first, the rallies were accompanied by clashes between protesters and security officials, but later the actions began to take place peacefully.

On August 15, at the initiative of the Belarusian side, a telephone conversation took place between Vladimir Putin and Alexander Lukashenko, during which the heads of state discussed the state of affairs in Belarus.

According to the Kremlin press service, both leaders expressed confidence that all the problems that have arisen will soon be resolved.

“The main thing is that these problems are not taken advantage of by destructive forces striving to harm the mutually beneficial cooperation between the two countries within the framework of the Union State,” the Kremlin stressed.

After that, Lukashenka said that Moscow, at the first request, will help the republic in ensuring security in the event of external military threats.

The leader of the republic specified that he had agreed on this during a telephone conversation with Putin.

On August 16, Putin and Lukashenko held another telephone conversation, during which, according to the Kremlin, the Russian side confirmed its readiness to provide the necessary assistance in resolving the problems that arose on the basis of the principles of the Treaty on the Creation of the Union State, as well as (if necessary) through the Organization Collective Security Treaty.

Later, Lukashenko said that Minsk and Moscow would use a joint grouping of armed forces in the event that they "twitch" on the western border of the Union State.

Prior to that, Vladimir Putin announced the formation in Russia of a reserve of security officials who can provide assistance to Belarus.

The Russian leader stressed that their involvement will be possible only if the extremists in the republic cross certain borders.

Putin added that, in his opinion, Russia is behaving "much more restrained and neutral in relation to the events in Belarus than many other countries - Europeans and Americans."

Also, in an interview with the Russia 1 TV channel, Vladimir Putin said that the Russian side considers the presidential elections in Belarus valid.

At the same time, the European Union announced that it does not recognize the official results of the presidential elections in Belarus.

The head of the European Council Charles Michel said that the EU intends to soon impose sanctions against "a significant number of those who are responsible for the violence in the republic and electoral fraud."

On August 31, Lithuania, Latvia and Estonia banned the entry of Alexander Lukashenko and 29 other high-ranking officials of the republic.