Raoult, Rubirola and Vassal unite against the government

Alongside Didier Raoult at the IHU in Marseille, Martine Vassal and Michèle Rubirola strongly criticized the management of the coronavirus epidemic in Bouches-du-Rhones by the government 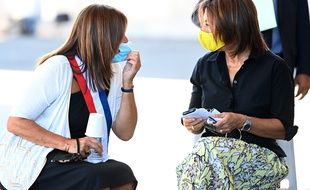 But what prompted Michèle Rubirola, brand new mayor of Marseille, and Martine Vassal, president of the departmental council and unsuccessful candidate during the last municipal elections, to bury the hatchet, to hold a joint press briefing on Thursday at the IHU? The press invitation, sent late this Wednesday evening, promised the implementation of “new joint actions” against the coronavirus in Marseille by two former political enemies, alongside Didier Raoult.

But the announced distribution of masks in Marseille, in the colleges of the department and to beneficiaries of the RSA seemed rather to be a pretext to better declare war in front of an audience of journalists. Around the famous professor Raoult, scientific backing of their new fight, the two political rivals decided to make, for a time, a common front, against the same enemy. In their line of sight: the government, whose management of the health crisis in Marseille, particularly affected by the epidemic, they unravel in chorus.

"The government has decided from Paris what would be good for our city, without engaging in the necessary dialogue with elected officials, and especially without giving us the means to enforce the decisions that are his, criticizes Michèle Rubirola. We need decisions to be taken in consultation. "

“In Marseille, we are always shown like the bad little ducks, abounds Martine Vassal. But what we are asking for is quite simply consultation. The president of the departmental council and the mayor of Marseille jointly denounce the lack of support from the state, in particular to enforce the wearing of masks in Marseille.

A government which, however, wanted to impose a reconfinement on Marseille, according to Michèle Rubirola, "if the situation continued to deteriorate". An “unthinkable” possibility for the brand new city councilor. “In Paris, on the other hand, they did not consider the reconfinement, annoys Michèle Rubirola. It's double standards, I told Castex over the phone, and I'm ready to say it again ”. "We must not go crazy, even if I know that it is difficult at the moment", loose Didier Raoult, after recalling that only seven people were in intensive care at the Marseille hospital of Timone due to coronavirus .

In this now open war, the closure of bars and restaurants at night from 11 p.m. to 6 a.m. in the Bouches-du-Rhône crystallizes these tensions between Paris and Marseille. Confirming that the government had initially envisaged a closure from 8 p.m., the new mayor of Marseille openly regretted that the midnight cap negotiated with the regional prefect, Christophe Mirmand, had not been accepted.

"The prefect listened and tried to speak up to maintain two services in restaurants, because it is important, all the same to think about the local economy, sighs Michèle Rubirola. But tonight, we are going to see the government and we will see how we can work together… ”Expected at the turn, Olivier Véran, the Minister of Health, is indeed visiting this Thursday evening in the Marseille city.

Coronavirus in Marseille: "Why us? »... Restaurant owners annoyed by the closing at 11 pm

VIDEO. Coronavirus in Marseille: The "headache" of back to school in the midst of an epidemic