Lacroix: In the midst of the Corona epidemic ... Egyptian prisoners suffer from neglect

French newspaper La Croix said that overcrowding and lack of health care are working to accelerate the spread of the Corona virus in Egyptian prisons, where NGOs have criticized detention conditions. 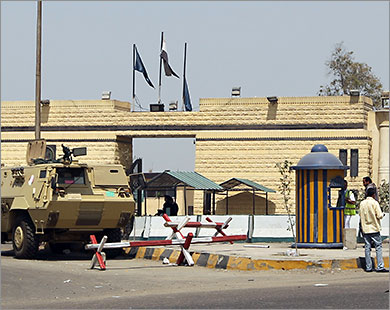 French newspaper La Croix said that overcrowding and lack of health care are working to accelerate the spread of the Corona virus in Egyptian prisons, where NGOs have criticized detention conditions, noting that prisoners' families are denied their visits 4 months ago, compounding the pain between the two parties.

Cairo newspaper correspondent Martin Rowe said that prisoners are deprived of newspapers, radio and the Internet, wondering what they can know about the Corona virus and how to protect themselves from it.

Breaking the doors of closed prisons

The reporter cited an example of the case of Mona Saif, who was annoyed after not receiving any news a month ago about her activist brother, Alaa Abdel Fattah, who has been arbitrarily detained - according to the reporter - since September 2019, even though she has been struggling to break the closed prison doors since the authorities suspended the prison visit on March 10 / Last March, when the epidemic began entering the country.

Mona Saif says, "We only got two letters from Alaa, and our family paid a heavy price for each of them. The first came after Alaa went on hunger strike for 37 days, and the second came after my little sister (accused of spreading false news about the Corona virus) was arrested." And, I don't know what we're going to do to get a third, these messages are the only ones that confirm he's still alive. "

And like Mona, the families of the detainees relate to this one thread that ties her to her loved ones, at a time when there are increasing cases of Covid-19 in prison cells and police stations across the country, according to a report published by Human Rights Watch on July 20.

200 prisoners suspected of being injured

The reporter referred to what the human rights organization mentioned regarding the death of at least 14 prisoners as a result of the epidemic, distributed in 10 detention centers, in addition to condemning the lack of medical care and the failure of prisoners to access tests and overcrowding in prisons, despite the release of 13 thousand detainees since last February .

In the organization's report, she mentioned what the "Justice Committee" - an independent organization based in Geneva, Switzerland - reported that approximately 200 prisoners had been afflicted by Covid-19, a number "very worrying," according to the head of the Egyptian Nadim Center for the Rehabilitation of Torture Victims Aida Saif. Country.

"Prisons are highly contagious places, overcrowded and without clean water and ventilation, and since the stopping of visits in March some detainees have not left," says this psychiatrist - whose organization stands alongside 3 other NGOs behind a petition affirming detainees' right to communicate with the outside world. Their cells, and others have not been allowed out into the open air since their arrest. "

Lack of care ... a repeated violation of human rights

"Avoiding these corona-related deaths was possible, because only one of these detainees was over 60, while the rest were not elderly," said Aida Seif al-Dawla.

"Leaving prisoners to die is a practice that does not date due to the unfortunate appearance of Corona," Human Rights Watch says, noting that only 9 out of 14 detainees who died of the virus were hospitalized, and sometimes were transferred just hours before their death.

In the face of these repeated human rights violations - as the reporter says - the detainees' families provide vital assistance, as the wife of a prisoner suspected of having Corona - on the condition of anonymity - says "I bring food and medicine every month, and officers allow me to do so because I keep silent about my husband's health And they threaten to put our loved ones in solitary confinement if we inform the media about the presence of the virus in prison. "

The reporter noted that 677 prisoners died due to lack of medical care since the arrival of Egyptian President Abdel Fattah El-Sisi to power in 2013 and until December 2019, according to the Justice Committee.

The reporter concluded that Egypt - according to the Arab Network for Human Rights Information - has about 106,000 detainees, about 60,000 of whom are political prisoners, according to estimates by several NGOs.