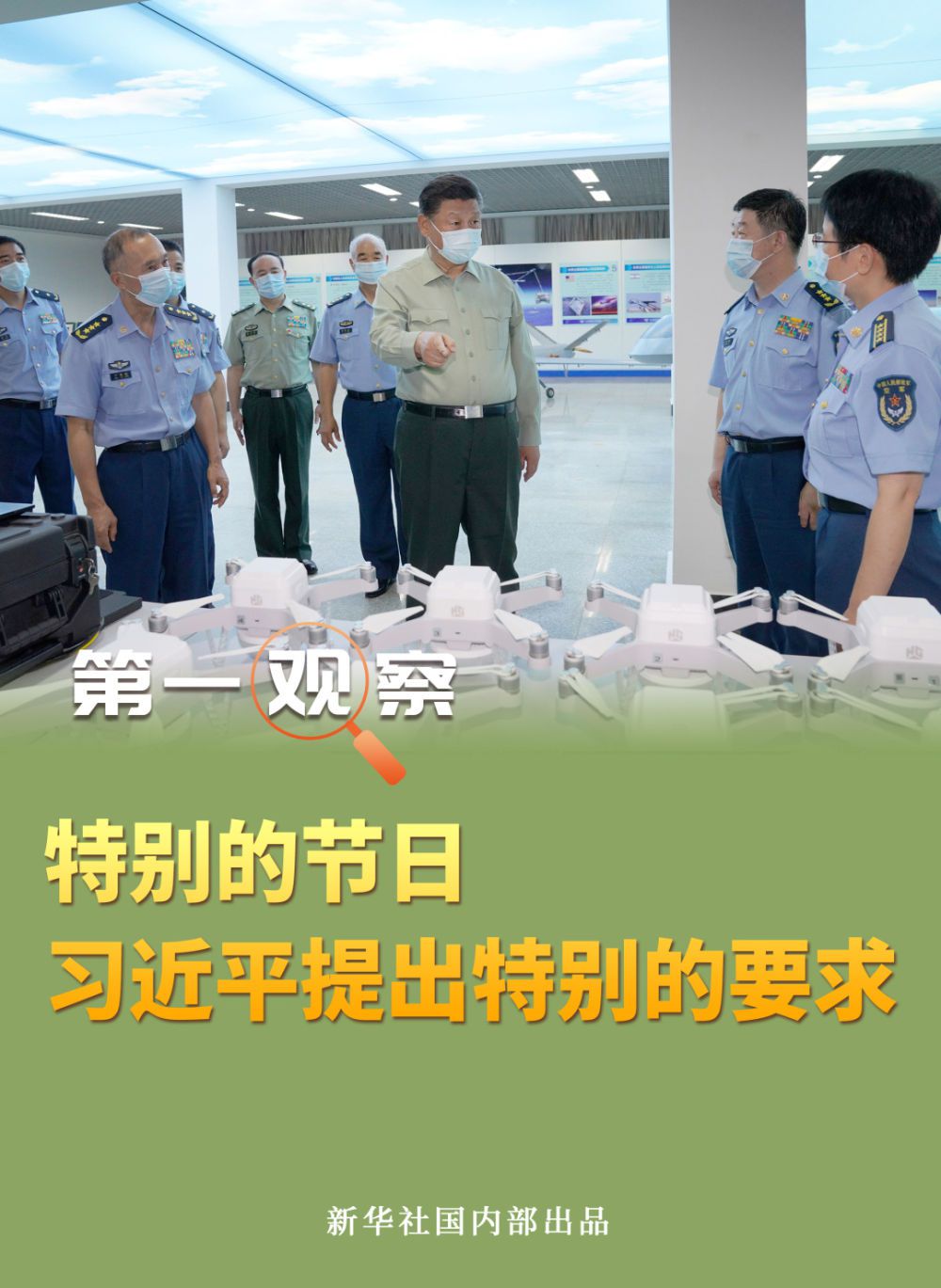 On the occasion of the August 1st Army Day, Xi Jinping, General Secretary of the Central Committee of the Communist Party of China, President of the State and Chairman of the Central Military Commission, visited Air Force Aviation University on July 23. On behalf of the Party Central Committee and the Central Military Commission, he extended sincere greetings to the school’s teachers and students Commanders and soldiers of the People's Liberation Army, officers and soldiers of the Armed Police Force, and militia reserve personnel extended holiday congratulations.

This is the eighth consecutive year that Xi Jinping has sent holiday congratulations on this special day.

On the afternoon of July 30, Xi Jinping presided over the 22nd collective study of the Political Bureau of the CPC Central Committee. The theme was to strengthen national defense and military modernization.

"To adhere to and develop socialism with Chinese characteristics and to achieve the great rejuvenation of the Chinese nation, we must coordinate development and security, enrich the country, and strengthen the military to ensure that the modernization of national defense and the military is compatible with the modernization of the country, and military capabilities are compatible with national strategic needs."

While sending holiday congratulations, Xi Jinping put forward special requirements, which provided follow and pointed out the direction for creating a new situation of strong and prosperous army in the new era.

At present, the world's major changes unseen in a century are accelerating, and the new crown pneumonia epidemic has a profound impact on the international situation, and my country's security situation is becoming more uncertain and unstable. The rapid development of the new military revolution in the world has provided us with rare opportunities and at the same time faced severe challenges.

During the 22nd collective study session of the Political Bureau of the Central Committee, Xi Jinping pointed out that it is necessary to strengthen the sense of mission and urgency, and strive to realize the leapfrog development of our military's modernization.

The officers and men of the "Nanjing Road Hao Eighth Company" conduct beach-grabbing and landing training in a certain sea area (photographed on July 23, 2015). Issued by Xinhua News Agency (Photo by Zhang Ningfeng)

How to adapt to changes in the international strategic pattern and national security situation and build a consolidated national defense and a strong army that is commensurate with our country’s international status and commensurate with national security and development interests is always a major strategic issue of great concern to the Party Central Committee with Comrade Xi Jinping at its core. .

-It is necessary to maintain the same direction, unbiased path, and undiminished strength, highlight the key point of military policy and system reform, coordinate and promote various reforms, and continuously liberate and develop combat effectiveness, liberate and enhance the vitality of the army.

-It is necessary to update management concepts, improve strategic literacy, improve systems and mechanisms, unblock strategic management links, substantively advance the revolution in military management, and improve the operational efficiency of military systems and the use of defense resources.

By unifying thinking, strengthening confidence, mobilizing enthusiasm, and stepping up work, the blueprint for modernization of national defense and the military will surely become a reality.

Strengthen the spiritual pillar of the People's Army

The Northeast Old Aviation School is the first aviation school founded by the People’s Army under the leadership of the Communist Party of China, and is known as the "cradle of the People’s Air Force."

In the War to Resist US Aggression and Aid Korea, 3 of the 5 Air Force "Class 1 Fighting Heroes" came from the "Northeast Old Aviation School". They were Wang Hai, Zhang Jihui, and Liu Yudi. Four graduate students, including Li Han, Zou Yan, Wang Tianbao, and Gao Yueming, were awarded the title of "second-level combat hero".

For more than 70 years, the People’s Air Force has developed from the “horse-drawn aircraft” and “alcohol instead of gasoline” to a modern military service composed of multiple arms and types of aircraft, with “united struggle, hard work, dedication, and pioneering new paths”. "The spirit of the Northeast Old Aviation School at the core has always been regarded as a precious heirloom, and has been continuously given new connotations and extensions.

These fine traditions and revolutionary spirit formed in the course of long-term struggle have continuously inspired the brave Chinese people and the heroic people's army to overcome difficulties and work hard.

A strong talent will lead to a strong career; Educating people for war is the core of the strategy of strengthening the army with talents.

When inspecting the Air Force Aviation University, Xi Jinping emphasized that it is necessary to adapt to the new situation and mission requirements, closely follow the orientation of running a school, strengthen top-level design and long-term planning, and transform the strategy of strengthening the military with talents into development plans and practical measures, and implement them in all schools and schools. The field and the whole process.

The officers and soldiers of a certain army unit of the "Three Great Power Company" used the training gap to organize theoretical study (photographed on September 21, 2016). Issued by Xinhua News Agency (photo by original Junmin)

When inspecting the Air Force Aviation University, Xi Jinping pointed out that it is necessary to strengthen party building and ideological and political construction, implement the requirements of strict party governance in an all-round way, and ensure that all school work adhere to a firm and correct political direction.

At the special historical node of the 93rd anniversary of the founding of the army, Xi Jinping's earnest urge once again pointed out the way forward for strengthening the army and injecting strong momentum into it.