Bribery of Referees -3 - How did the AFC extract its rulers from the quagmire of corruption?

Despite constant skepticism and accusations of bribery that stigmatize African arbitration and undermine its reputation, the AFC eliminated this devastating scourge, which was also mired in it until some honorable officials pulled it out. 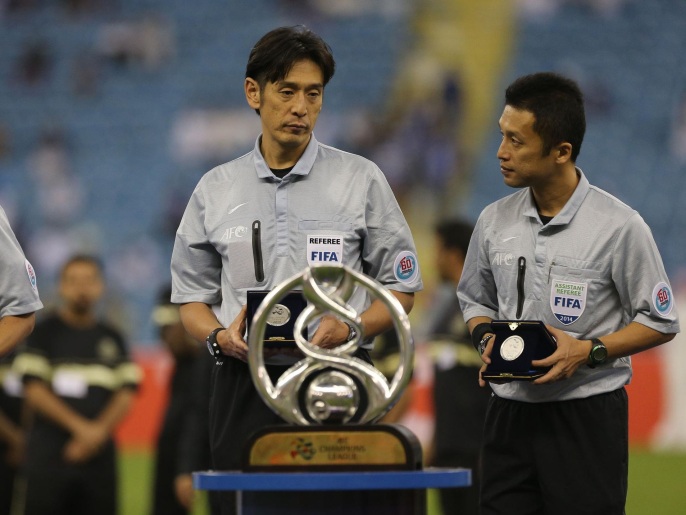 Despite constant skepticism and accusations of bribery that stigmatize African arbitration and undermine its reputation, the AFC eliminated this devastating scourge, which was also mired in it until some honorable officials pulled it out.

The charges of a player, coach of Zamalek and the former Egyptian team, Farouk Jaafar, last week, struck the African soccer referees with bribery, the thorny issue that was not tolerated; The stadium judges on the continent are often stigmatized by this accusation, with every match witnessing impressive refereeing errors, and they are many.

Farouq Jaafar: Zamalek was the referee of Percy, and the referee asked me, I want a penalty and do not expel a player pic.twitter.com/uC9VZdAU96

Former Syrian international referee Hamdi Al-Qadiri - Al-Jazeera Net - says that the Asian championships were until the 1980s a hotbed of corruption and countless "outrageous" bribery incidents, until Brigadier General Farouk Bouzou took over the presidency of the AFC Referees Committee in 1983 and began a massive cleansing campaign Arbitration was morally collapsed due to corruption, and soon he succeeded in eliminating this phenomenon by 99%, by punishing many rulers who were found involved in corruption and bribery, most of them from Central and East Asia, and he warned the civil unions against trying to influence the rulers in any way.

Al-Qadri, the Qatari Cup’s arbitration analyst, added that the continent’s arbitration quickly reaped the result of the cleansing carried out by Bozo, and FIFA began to rely heavily on Asian referees, and many of them starred at the level of the World Cup and major international championships over two decades.

Al-Qadri pointed out that after Bozo left the presidency of the Asian Referees Committee in 2007, a kind of indolence occurred in an unintended way in fighting attempts to influence the rulers, and some cases of arbitration bribery occurred in different forms and methods, the last of which was the famous case of the Lebanese rulers, which prompted the new referees committee to address It has what is known as the second purification of Asian arbitration.

The case of the Lebanese rulers erupted in April 2013, when the Singaporean police arrested the Lebanese referee Ali Sabbagh on charges of taking a sexual bribe in exchange for manipulating the outcome of an AFC Cup match between Singapore's Tampers Rovers and the East Bengal, in favor of Singaporean businessman Eric Deng Si Yang, who continued With him by sending him YouTube clips, to lead him in playing the result in favor of Rovers, who lost the match 4-2.

The AFC remedied the scandal by changing the referees' crew on the night of the match, and the ruling recognized the incident during the investigations, and he was sentenced to 6 months in prison in Singapore. The court also convicted his assistants but released them and deported them to Lebanon.

Al-Qadri comments on this incident that the Asian Referees Committee was successful and resolute in addressing these behaviors and took numerous preventive measures to not repeat them, including: the referees not accepting any gifts from the teams under any name, and the referees not meeting any special invitation to lunch or dinner or attending any social activity Another, with an emphasis on placing a personal escort on the floor of the referees' rooms and in the hotel entrance, and preventing anyone associated with the competing teams from communicating with them or visiting them.

The committee also stressed the rulers 'monitors and residents to fully know all the rulers' movements outside the residence hotel, and accompany them, whether it be shopping, training or hiking.

Al-Qadri confirmed that the Referees Committee issued a decisive warning not to participate referees in betting on the results of the matches even if they were outside the Asian continent, because whoever is betting today can ask himself tomorrow to manipulate the results of the matches, indicating that he accompanied these decisive measures to double the rewards and allowances of referees In games and tournaments.

Despite the success of the AFC policy in eliminating bribery completely, it did not have mercy on any ruling that makes clear mistakes even unintentionally, so that it can serve as an example to those who begged themselves to deliberately mistake for the sake of any team. In 2014, the AFC imposed a 6-month ban on Japanese international referee Yuichi Nishimura, due to his mistakes in the AFC Champions League final between Saudi Al Hilal and Sydney, who was crowned the title due to the referee's mistakes.

The AFC campaign against bribery and corruption was aided by the absence of power centers, all concerned with electoral votes, as 5 presidents rotated over the union during the period from 1988 to 2017, in which Issa Hayatou remained the president of the African Union (K).

One of the referees' companions in the Asian matches and tournaments of Al-Jazeera Net - who declined to be named - says that he notes the adherence of the arbitration staff to the instructions and their fear of committing any suspicion that may make them subject to life-long suspension or deletion, such as the Lebanese referee who spent his judging career with a reckless behavior, indicating a lack of commitment African referees who accompanied them in matches or tournaments with the instructions of the AFC.

The AFC was exchanging referees for the Nations Cup in two continents (Asia and Africa), but the agreement was halted without announcing the reasons that might have polluted reputation for African arbitration.