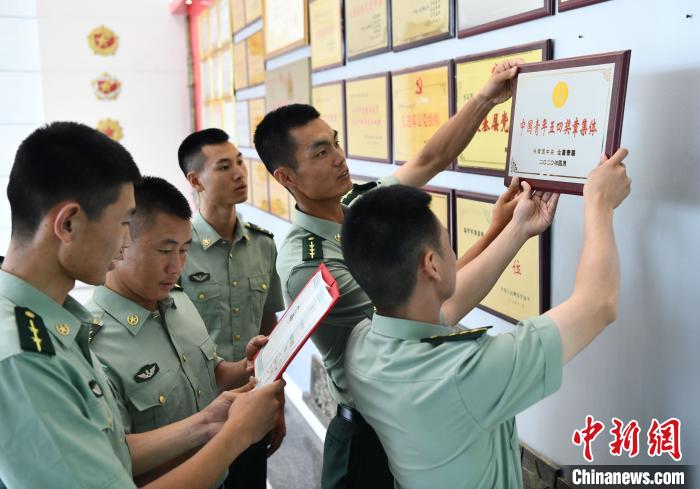 In the midsummer season, a combined battalion offensive drill in a certain sea area in eastern Guangdong was fighting fiercely. Seeing that the line of defense was about to be broken, Wang Yicun, the corporal squad leader of the "hard six company" of a synthetic brigade of the 74th Army, roared: "I can't stop it, I must drag it!" Scratched his face, cut his hands, exposed bloody wounds, still stubbornly resisted, and he just blocked the "Red Army" firmly in front of the core position.

"If you lose your skin, you can grow longer. Wherever you lose your position, look for it!" Wang Yicun said. The scars are military medals, cast by soldiers with sweat or even blood. The plain words showed the bloody courage of the officers and soldiers of the Sixth Company to fight without fear of fighting and not hesitate to die. During the war years, the Sixth Company forged formed a ruthless force that overwhelmed all enemies, an indomitable tenacity, and the stamina to persevere to the end. Over the past few decades, generations of officers and soldiers have continued to pass on, and the hard-bone character has always been vigorous.

The picture shows the company commander Zhao Song and officers and soldiers hanging the "Chinese Youth May Fourth Medal Collective" medals won by the company on the wall of honor. Photo by Zhang Yongjin

For decades, Liulian has always been adhering to the rules and disciplines of prohibiting orders and resolutely enforced rules and disciplines. They adhere to the old tradition of "five alikes", that is, leaders are the same as they are, whether they are inspected or not by their superiors, collective activities and individual activities are the same, enforcement cadres are the same as soldiers, and the camp is the same as outside the camp. . In an actual combat exercise in August 2019, the sixth company served as the blue army, and the battle was in a stalemate. The company was tasked with leading a surprise attack and killing the Red Army commander. A five-person reconnaissance team quietly interspersed near the Red Army command post. In order to wait for the fighter plane, In the boring underground fortifications, he lurked for more than 3 hours under the high temperature of 40℃. During this period, no one came out to breathe. Finally, he successfully "beheaded" the "enemy" and reversed the fighting situation in one fell swoop.

Don't be afraid of death

The picture shows the platoon leader Li Xichao taking out his "heirloom" to tell the soldiers about the company's red story. Photo by Zhang Yongjin

In the history of the Sixth Company, the Yetaishan battle was a glorious example. He was personally awarded the "Sixth Company of First Seeing Wonderful Merit" pennant by Chairman Mao.

In order to pass on the bloody courage from generation to generation, the Sixth Company welcomes combat heroes into the platoons, hangs the battle honour on the bedside, and puts the battle history in the pocket. All 12 platoons are named after the combat heroes. infected. Although the flames of war are fading away, the young fighters are still full of hard work, tenacity, and stubbornness.

The picture shows the squad leader Wang Donglin won the medal in the international military competition under the inspiration of the "hard-boned spirit". Photo by Zhang Yongjin

The fourth squad leader Wang Donglin participated in the "International Military Competition-2018" safety environment project chemical defense professional skills competition, in order to practice chemical defense reconnaissance skills, wearing airtight chemical protective clothing, against the high temperature of 40 ℃ in the car, constantly challenging the body limit. In the end, he won the first place in the individual event and third place in the team, showing a strong presence in the international arena.

The officers and soldiers who have fought against the Sixth Company have said that in the bones of the Sixth Company's soldiers, there is a spirit of winning at every flag, winning every battle, and courage to win. Over the past three years, the Sixth Company has accepted nearly 20 challenges from 8 companies and has always maintained an unbeaten record.

The "fortress" powerful company is as strong as steel

The picture shows the instructor Feng Jie telling the company officers and soldiers about the fine tradition of "hard-boned spirit". Photographed by Zhang Yongjin

This hero company, which was born in the war of resistance against Japan and grew up in challenges and trials, has survived the wind and rain, but has always been advanced and has been strong for a long time. An important reason is that the party branch is a strong "battle fortress".

The company insisted on holding two "regular meetings" of organizational life for 43 years. “It’s a tradition not to say good things in front of your face or behind your back, relying on organization to manage cadres and strict systems to manage party members. This tradition has been in the company for 43 years.” Instructor Feng Jie said that party members and cadres are the “leading goose” in company building. Their role is played well, the branch fortress is strengthened, and the company will be more prosperous.

The picture shows the instructor Feng Jie telling the story of the "hard-bone heroic wind" sculpture to the soldiers in the company honor room.

The "fortress" is strong, and the company is as strong as steel. The Sixth Company is like a big family, closely uniting officers and soldiers. On holidays, party members stand guard and cook for the soldiers; in the camp, outside training and even in the exercise field, the party branch insists on giving the soldiers a collective birthday; visiting the relatives of the martyrs on traditional festivals, or expressing condolences to the families of the fighting heroes by letters and calls. ...

The wind is righteous, people are united, and the heart is united. In the past three years, the company has elected 56 non-commissioned officers and 18 party members. It has honored 76 people for meritorious service, and has been judged hard and unsuccessful. The officers and soldiers said: Although it was very painful and exhausting in the Sixth Company, there were people who loved and felt warm, and the pain was worth it. (Finish)