The 150-meter bungee jumping tower collapsed in Kaivopuisto, Helsinki - the owner of the amber crane was surprised: “This should not happen”

The CEO of the company that owns the mobile crane was amazed by the accident.In Helsinki's Kaivopuisto, an approximately 150-meter bungee jumping tower has fallen into the sea in the morning. The Rescue Department received an alarm on the scene at less than seven in the morning. According to the rescue service, the boom section of the lower end of the mobile crane has bent, as a result of which the tower has fallen into the sea. No one has been injured in the case. The v... 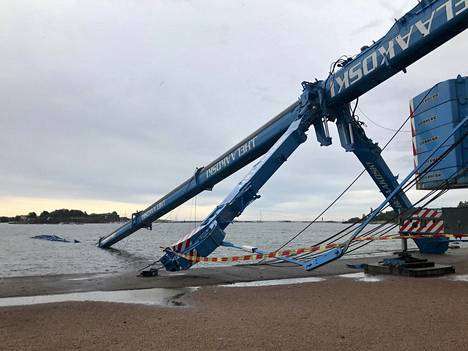 In Helsinki's Kaivopuisto, an approximately 150-meter bungee jumping tower has fallen into the sea in the morning. The Rescue Department received an alarm on the scene at less than seven in the morning.

According to the rescue service, the boom section of the lower end of the mobile crane has bent, as a result of which the tower has fallen into the sea. No one has been injured in the case.

The vehicle had remained stationary on the shore. The cause of the boom failure is still unknown.

- Based on the pictures, the boom has only betrayed and bent at the root, says the firefighter on duty Kari Ursin.

The rescue service checked to see if hydraulic oil was leaking from the tower into the sea. No leaks were found.

According to Ursin, lifting the tower out of the water is the responsibility of the jumping association and the company that rented the crane.

Ursin does not go into more detail about what was the reason for the failure of the tower structures. However, he says that the strong wind caused by the storm on Helsinki in the morning could be one possible reason.

According to the Finnish Meteorological Institute, there was a strong wind in Helsinki before seven in the morning.

Helsinki police say on Twitter that the police have visited the scene.

- An S-notification has been registered, which in this case means that the matter is known to the police. However, in the light of current information, what happened will not cause any further action on the part of the police, the tweet states.

The accident crane has been leased from Nostopalvelu J. Helaakoski Oy. According to the company's CEO Tomi Sulonen, the Kaivopuisto crane is of model year 2014. The crane is Liebherr brand and model LTM 1350-6.1. It has been used in the past for bungee jumping. The crash of the crane completely surprised Sulonen.

- This came as full of surprise as it could be. This should not happen, Sulonen says.

According to Sulonen, no faults have been detected in the crane before.

- It's been a perfectly fit machine.

Prior to Kaivopuisto, the crane has been in use on construction sites.

At this point, Sulonen does not comment on the reason for the crane's crash.

- I can't say anything right yet. We will investigate with the manufacturer what the reasons may be for it.

According to Sulonen, the crane is to be lifted from the sea during the weekend.

- At least that's what we're trying to do, plans are still underway.

Markku Eklund, chairman of Sky Breakers ry, which is responsible for jumping, thinks that the crane's crash was caused by thunderstorms.

- There has been a momentary thunderstorm then. There probably can't be another reason for that.

According to him, nothing similar has ever happened during the activities of the association.

The jumping tower had time to be open a week before the accident. According to Eklund, customers did relatively well during the week, although the summer has been a little quieter than usual due to the corona.

According to Eklund, the lifting of the crane from the sea will start during Friday. He doesn’t know how long it takes to lift.

- In Kaivopuisto, it can be difficult to continue operations when there are no more cranes. It’s hard to say if the action will continue this summer, of course we would like that.

Benji jumps from a crane have been jumped on the shore of Kaivopuisto in the summer for years. Eklund says that the association has been running bungee jumping activities in Kaivopuisto for 24 years.

Sky Breakers says on its website that this is the highest bungee jump in Finland. After the jump, the jumper is lowered onto a floating ferry in the ocean.

According to Sky Breakers, the speed achieved during the jump is about 120 km / h.