The water level of Nanjing section of the Yangtze River exceeds the historical extreme value: the whole city is in strict formation to wait for flood control and flood control

China News Service, Nanjing, July 18 (Reporter Shen Ran) On July 18, the Yangtze River flood rewrote the highest record in Nanjing's hydrological history: 10.26 meters, which surpassed the "10.22 meters in 1954" engraved on the Shimonoseki River surface stele. In order to meet the severe test of flood control and flood control, Jiangsu Province upgraded the red warning of the Nanjing section of ... 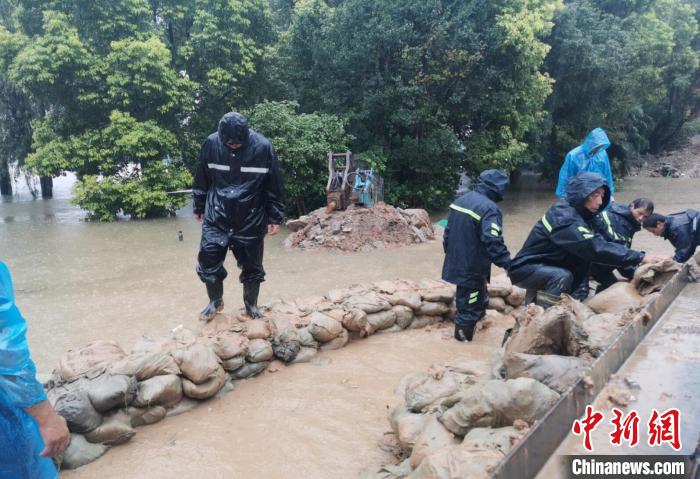 On the afternoon of the 18th, when the sky was gloomy and the rain was light, the river embankment near the Zhongshan Wharf in Nanjing appeared to be particularly "lively". The people who were raining and "watching the water" were endless, and trucks and police cars transporting flood prevention materials shuttled between them.

In front of Nanjing Zhongshan Wharf, the ferry has been suspended. Shen Ranshe

Outside the Nanjing Tide Water Level Station, which was built in 1912, the black marble monument is engraved with the historical record "The highest tide water level was recorded at 10.22 meters on August 17, 1954 (Wu Song Base)." It was broken at 7:50 on July 18, 2020. Superimposing the heavy rain, the astronomical tide of the lunar calendar, and the pressure of the influx of the Yangtze River, the tide level of Nanjing in the Yangtze River reached the historical extreme value of 10.26 meters on the morning of the same day.

In order to prevent the pressure difference between the water level inside and outside the river embankment, a number of Yangtze River embankment gates have been cofferdams. Shen Ranshe

Kong Rongrong, an old webmaster who came to work at the station in 1983, was invited to the station early in the morning. Although she worked at this station for decades, she saw this high water level for the first time. Kong Rongrong pointed at the blue screen that automatically measured the water level in the water and told reporters, "In the middle of the three pole piles below the electronic screen, the water level ruler is erected. In the past, the water level was measured with a telescope to monitor the scale at a distance, which is far inferior to the current automatic measuring instrument. Accurate and real-time."

The river water outside the river embankment has submerged the former hydrophilic walkway. Shen Ranshe

According to his recollection, "The normal water level of the Yangtze River is about 7 meters, the dry season is generally about 3 meters, and the lowest point in history is only more than one meter." Usually standing on the riverside waterside trail is a water level station on the second floor of the small, which is soaring. In the river water, it has become a tower in the river.

During the flood control period in Nanjing, people along the Jiangjiang Road traveled as usual. Shen Ranshe

In 1983, Kong Renrong, an old webmaster who had worked at the water level station, also saw such a high river for the first time. Shen Ranshe

Pan Jintang, head of the Urban Management Section of Xiaguan Street, Gulou District, Nanjing, has been stationed on the riverside since July 6 in a flood control emergency duty station across the street from Jiangdi. He told reporters that on the night of the 17th in Nanjing, a yellow rainstorm warning was issued. Patrol officers patrolled the Yangtze River embankment and the Qinhuai River banks every hour, and requested that any water hazards be in place as soon as possible.

"The 2.1 kilometers of flood control along the southern section of the Yangtze River under our jurisdiction is from the Qinhuai River estuary to the Nanjing Yangtze River Bridge. It is also the section with the most gates in the Nanjing section of the Yangtze River. There are 22 of them, which were all blocked as long as the rivers exceeded the alarm. For the sake of safety, since the flood control, many key gates including Zhongshan Wharf have also been protected inside and outside the weir to prevent pressure caused by the drop in the water level inside and outside the embankment." Pan Jintang introduced.

On July 18, 2020, the Nanjing tide level station, which was built in 1912, ushered in the historical extreme value of the water level. Shen Ranshe

Although looking at the riverside roads on both sides from the Zhongshan Wharf, the long-term rain and rain water has not been seen for a long time, and it seems to be as usual, but in the short period of more than ten minutes interviewed by the reporter, it roared every few minutes and was full of flood prevention sand The heavy trucks and the patrol vehicles shuttled between them still showed the tenseness of the first-level emergency response of the city's flood control.

Just a day ago, the Ministry of Water Resources of China notified that the No. 2 flood in 2020 in the Yangtze River had formed. On the same day, No. 1 flood in 2020 occurred in the Huaihe River. Some areas of Anhui Province suffered heavy rains on the 18th. It is said that in calm, we will stand up and wait for the more severe test of flood control. (Finish)