Queen Victoria, 68, faced 24-year-old Abdul, and there was no going back - the relationship caused a court scandal that was hidden for a hundred years

Queen Victoria’s friendship with the Indian Abdul Karim shocked the British court so deeply that an attempt was made to completely erase it from the history books. The truth was not revealed until nearly a hundred years later. 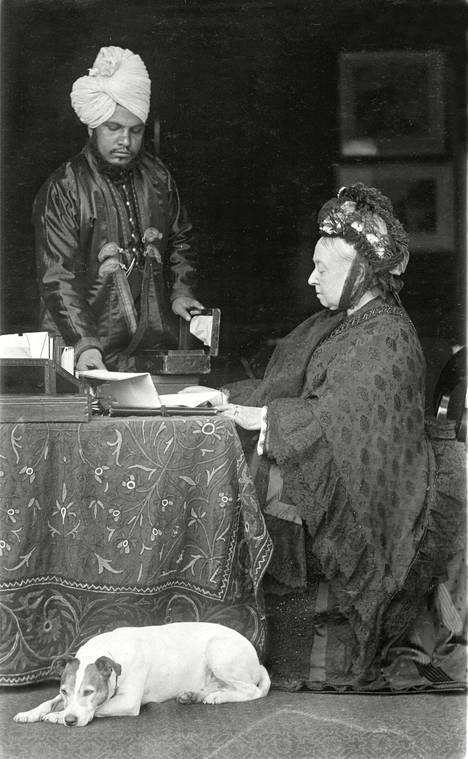 That June morning really crept into the history of the British court. It was the year 1887, and Queen Victoria would soon meet for the first time an Indian, born to a Muslim family of six, Moammed Abdul Karim. Karim served breakfast to Queen Victoria at Frogmore House, on the premises of Windsor Castle.

Victoria, 68, sat at the table in gray hair and proud, while Karim, 24, was abroad for the first time in her life and had to do everything she could to prevent the vibration of her hands and the swaying of the silver tray.

At its best, the queen of the British Empire, who ruled a quarter of the world’s lands, and an Indian man who had escaped poor conditions into London looked at each other, as a duo from those starting points can look at each other.

From that summer morning began a friendship that had lasted for more than a decade that no one, hardly even themselves, could have expected.

A large exhibition of colonial cultures had been held in London a year earlier. Of course, Victoria also visited it - after all, she was also the Empress of India.

In an exhibition that attracted millions of visitors, Indian rugs were presented by prisoners in an Indian prison who were involved in a prison rehabilitation program. Abdul Karim was by no means one of the prisoners, but worked in the prison as a clerk and had been organizing a months-long trip to the exhibition together with the prison’s superintendent, John Tyler.

Little could be deduced from the face patinated by the Queen’s age, but she was greatly impressed by the exhibition and especially its Indian section. Indeed, he soon informed Superintendent Tyler that he wanted two Indian servants to work under him for the next year. There was not any year ahead, as the Queen was already celebrating her 50th birthday.

The request surprised, but the superintendent could not afford to refuse. It was not possible to send any prisoners as the Queen’s servants, so the Chief Inspector chose his best employees: Abdul Karim and Mohammed Buksh. The men received quick training in British court rules and English, after which they traveled for months by ship from India to London.

Queen Victoria is said to be completely charmed by her Indian friend.

So the queen and Karim met. The ignition of the friendship was a small miracle in those circumstances. Everything was made possible by the fact that Queen Victoria was a rather progressive ruler who enjoyed learning something new and developing the world. The conditions for the start of the extraordinary relationship were also favorable, as Queen Victoria felt deprived after the death of her prince-wife Albert.

Prince Albert died in 1861, and his death was a great shock to the queen. Over the next ten years, Victoria was rarely seen as representing, and even the interior of the palace was clad in mourning colors for years. After recovering from her husband's death, the queen began to realize that she was no longer a young virgin. Then an Indian gentleman appeared in the familiar everyday life of the British court.

Suddenly, the enthusiasm for learning something flared up again.

Karim came as if to become acquainted with the secrets of Queen Urdu. The language charmed Victoria and already at the end of the summer Karim gave the queen private language lessons.

- I am very interested in the language of the people, which I have not previously had access, the queen found at later wrote in his diary.

The relationship deepened more and more confidentially. Viktoria used to look at Karim, who was gesturing excitedly and enjoying her role as a teacher with a happy and small smile. Discussions spilled over from world events into politics and philosophy. Two different worlds had encountered and found something new from each other.

At the end of the year, the Queen promoted Karim to Munchi - her personal teacher.

Ahmed Husai and Adbul Karim going out with the queen.

Needless to say, at that time, a young foreign man struggling with the dignified world of the British court got bad looks. That is, after the presence of an exotic-looking Indian was at all accustomed to.

The corridors of the palace contracted, and as Karim walked to the scene, a chilling silence descended on the room. Karim’s citizenship heated the emotions of many long-time and trusted workers for fear of tarnishing the reputation of the British court. However, the queen was unwavering and she liked Munshista. Karim even ate with him, which was unprecedented.

In particular, the Queen's son, Prince Edward, later King Edward VII, could not stand Karim in his eyes. His suspicions arose from the fact that Karim became a trustee of the Queen in a very short time. It was not made easier for Viktoria to appoint Karim as the superior of the other Indian servants, to take him on his travels, and to give him his own room from Balmoral Castle.

Brittihovi was convinced that Munshi had swam in the Queen's favor with fraudulent intentions, exploited their beloved monarchy, and wanted only to become famous. The Queen left the discriminatory opinions of others entirely to her own dignity - in that sense, she was far ahead of her time.

Queen Victoria's son Edward VII could not stand Abdul Karim in his eyes.

In fact, the queen seemed to enjoyed being framed by a tall and tall man. However, the relationship did not go deeper than friendship in the light of current knowledge, even though in the letters later exchanged by the duo, the final cadets whispered "your dearest friend" and "your dearest mother."

Munshi also introduced the wonders of the Victorian world. There was no mango seen in Britain at that time, but after Karim told of that miraculous fruit, the queen ordered one for herself without delay. The staff had to swallow their pride and humbly deliver the mango to the Queen.

Karim barely made it through, but probably had to pay an expensive price for his friendship. Even the Queen’s own doctor, Sir James Reid, was put to speak to Victoria. In notes found later, Reid described the queen drifting into the traps of outright “Munshi madness”.

The friendship, despite all opposition, eventually lasted intact for 14 years, until the end of the Queen’s life, although Karim occasionally returned to India. A year before the Queen’s death, Karim shook the British court by receiving the Cross of the Order of the British Empire granted by the Queen.

It nailed his fate, and after the queen died, Edward VII, who had risen to power, kicked Karim out of the court with lightning speed. He ordered the written evidence to be burned so that no one would know a word about the friendship between his mother and the Indian man, which he considered inappropriate. The 14-year relationship literally evaporated like smoke into the air.

Karim, deported to India, died eight years after his queen.

Everything, according to Edward's wish, remained a secret for an astonishing length of time - until just over 90 years later, Indian researcher Sharabani Basu found his way to the secret. Basu was on a holiday trip with his family to the UK in the early 1990s: there they visited Osborne House, which had served as Queen Victoria’s private residence. On the wall adorned a painting of the dark-skinned Abdul Karim.

- I realized that he must have been very relevant to him, Basu said.

Basu began to investigate. He went through all the possible material and, as a result of a long, persistent search, reached the descendants of Karim. They had kept Karim's diaries. The secret began to be revealed piece by piece.

- The diaries read that I hope the story will please, no matter in anyone's hands. And almost a hundred years later they were in my hands, Basu has recalled a moment in his enchantment.

Basu wrote the story that came to light as the book Victoria & Abdul: The True Story of the Queen’s Closest Confidant (2010). The book was also made into the film Victoria & Abdul (2017), starring Judi Dench and Ali Fazal.

In 2017, the film Victoria & Abdul was released, which tells the story of a friendship that shook the duo.

The friendship between Queen Victoria and Abdul Karim is unparalleled in true truth. The Indian gentleman probably brought joy, new insights, and a figurative shoulder to lean against in the last years of the queen. Above all, he represented the Queen with a fresh breeze into the stubborn routines of the British Court.

King Edward VII erred in thinking that exposing the matter to all the people would tarnish the reputation of his mother. It did just the opposite. Today, Queen Victoria is remembered as a progressive and tolerant ruler - thanks to the famous munsh.

Sources: The Time, Times of India, The Independent