The cost of dividing the center-right: Vox and Cs votes could give Feijóo at least one more seat

The polls predict for tomorrow a comfortable victory for the PP of Aberto Núñez Feijóo in Galicia and the PNV of Iñigo Urkullu in the Basque Country. Especially bulky may be the m The polls predict for tomorrow a comfortable victory for the PP of Aberto Núñez Feijóo in Galicia and the PNV of Iñigo Urkullu in the Basque Country. Especially bulky may be the majority of the Galician president, who polls gave at the beginning of the week a vote percentage of between 46% and 48%, which would take him between 39 and 41 seats. Absolute majority sure ... if nothing goes wrong.

The good prospects of the two candidates for reelection face an uncertain scenario despite the unanimity of the polls. In Galicia, at the beginning of the campaign there were 31% undecided, according to the data from the CIS pre-electoral survey, which could have been reduced to just over 10%, according to the Sigma Dos poll for EL MUNDO in early this week.

In addition, it remains to be seen what incidence the coronavirus pandemic has on demobilization of the vote, especially among the most vulnerable to the virus, the elderly, voters mainly from the PP and the PSOE. And finally, the effect that the concurrence of Vox and Citizens in Galicia may have on the final result, with little chance of obtaining representation in the regional Parliament, but which will subtract votes from the popular yes or yes, although they may be few.

In this last specific point, in 2016 Ciudadanos stayed at the gates of the seat, but for this Sunday the polls predict that neither the orange formation nor Vox will exceed in any constituency the threshold of 5% of the votes that the autonomic electoral law requires for achieve representation in Parliament.

Four years ago, the emergence of Cs did not stop the absolute majority of Feijóo, so it would be logical to think that this time it will do even less (the estimate of Cs vote in the Sigma Two poll was 1%, and that of 2% Vox). However, taking into account the data from the polls and with a participation of the residents of Galicia and a percentage of valid votes similar to the previous elections, the votes without translation in seats of Citizens and Vox could add a site for Orense to the result of the popular assuming that all those votes went to the formation of Feijóo. In other words, the PP could lose a seat due to competition in the center-right.

Other cabals consist of calculating the number of votes that Vox or Ciudadanos would need to have at least one representative. According to the CIS forecast, Orense would be the province where Ciudadanos is closest to achieving a deputy. The estimate gives him 3.4% of the valid votes. However, the orange formation would have to exceed 5.5% of Galicia en Común to obtain a seat that would snatch the party linked to Podemos and not the PP, even though that hypothetical growth of Cs was at the expense of the popular ones .

The feat looms unlikely. To achieve this result, the party led by Beatriz del Pino would have to win the support of about 9,000 people from Ourense, while, according to the CIS survey, and if the participation does not differ in excess of that of previous years, it will not reach 6,000 in said Province.

It is precisely in Orense and also in Lugo , the two least populated constituencies and with the highest proportion of voters in rural areas, where the PP has historically obtained its best results. The CIS estimates that those from Feijóo will reach 48.1% of the votes in both provinces. The best Vox forecasts are also in Orense and Lugo, where the popular ones are less likely to lose seats.

The A Mariña area also belongs to the province of Lugo, where a coronavirus outbreak has confined more than 70,000 people until Friday, two days before the elections . After analyzing the situation, the Galician Electoral Board concluded that the conditions of the electoral process will not be affected in this area. The 259 active cases registered by Galicia on Friday will not be able to go to vote, according to that day the Health Minister, Jesús Vázquez Almuiña .

Division on the left

Among the latest surveys published, prepared by NC Report , Sigma Dos or Electomanía , that of the CIS is the only one that gives Ciudadanos a better result than Vox. While the public body calculates 2.2% for Cs and 1.4% for Vox, the rest of the polls calculate 1.5% and 2.5% of the votes respectively. The small difference falls within the margin of error, so either scenario has a similar probability of becoming a reality.

In the district of La Coruña , if Ciudadanos or Vox took 5% of the votes at the expense of the PP, they would go from having 13 seats to 12. In Lugo, even if they reached the minimum required, they would not have representation but they did They would subtract a site from the popular ones that would go to the Bloque Nacionalista Galego (BNG). Finally, in Pontevedra , if one of the two formations exceeds the threshold, the cost could be up to two seats for those from Feijóo.

The intra-bloc division is also more pronounced in this electoral appointment on the spectrum of the left. In Marea, which won 14 seats in the previous elections, like the PSOE, it now appears fragmented in Galicia en Común , with the support of Podemos, and Marea Galeguista . Polls predict that the first would get between 5 and 7 seats while the second would be without representatives.

Continuing with the estimate proposed at the beginning, from the CIS data if both forces concurred together they could achieve up to two more seats: one for Lugo, who would snatch a PP with no competition in its block and another for Pontevedra who would lose the PSOE.

In the Basque Country, the main question is whether Vox could get a seat. According to the polls, it has a possibility in the Álava province . As for the PP and Cs, in this case they do attend the elections together, without the polls predicting an improvement in the results that the PP produced alone in 2016. Quite the contrary.

PoliticsAlberto Núñez Feijóo: "I need 10% of the PSOE to vote for me and Cayetana makes it difficult"

Galicia 2020 Elections The CIS predicts a comfortable victory for Feijóo, which would reinforce its absolute majority on 12-J

PoliticsThe PP leadership comes to the rescue of Carlos Iturgaiz 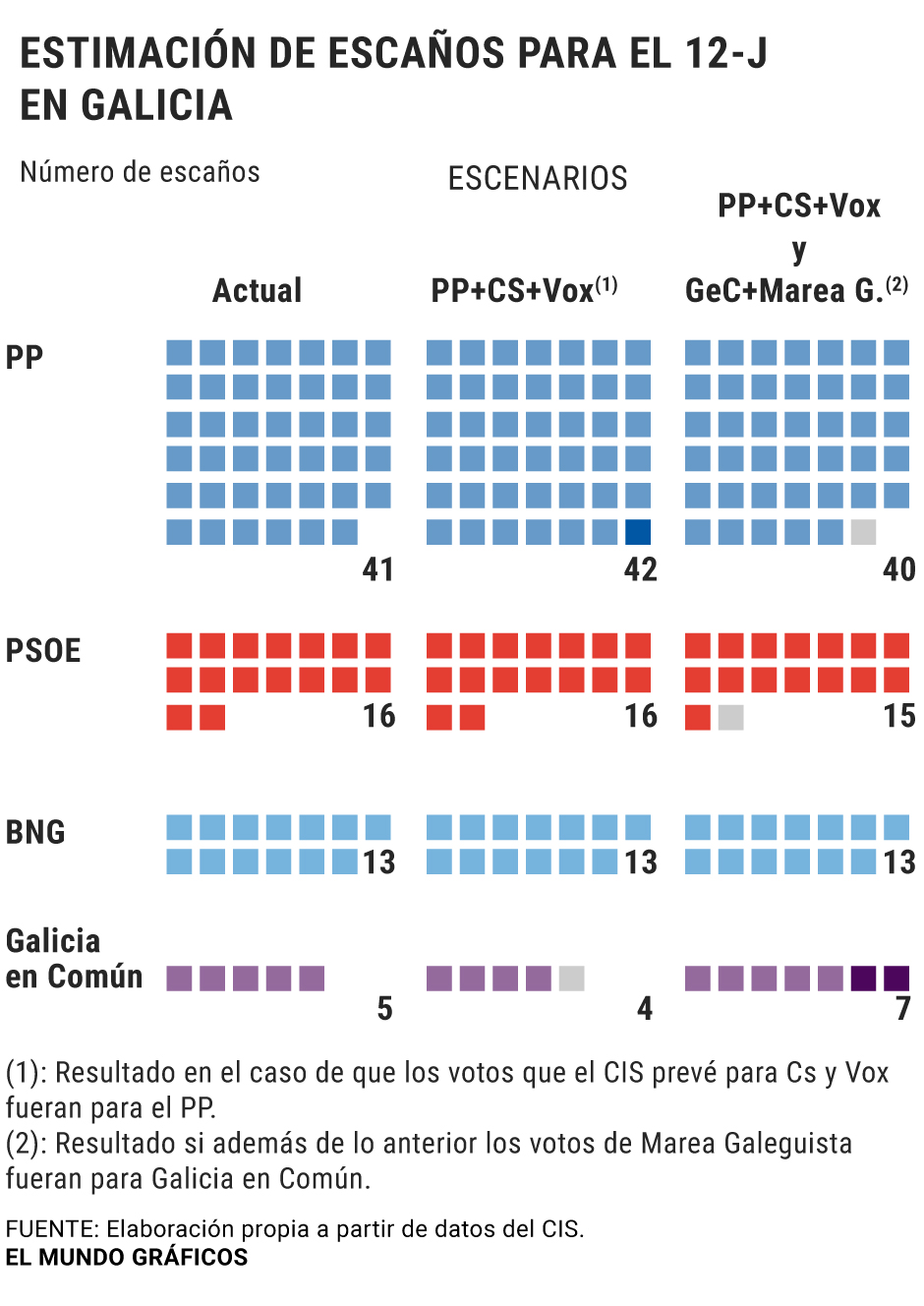 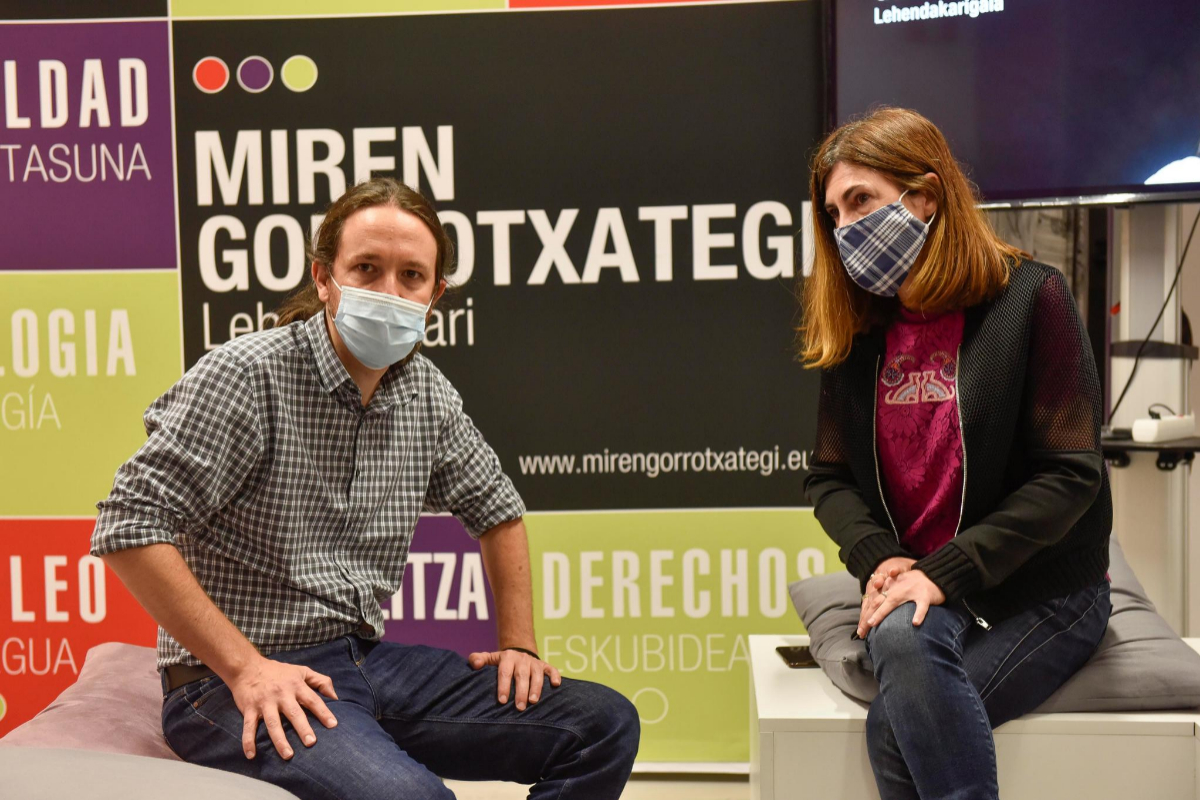 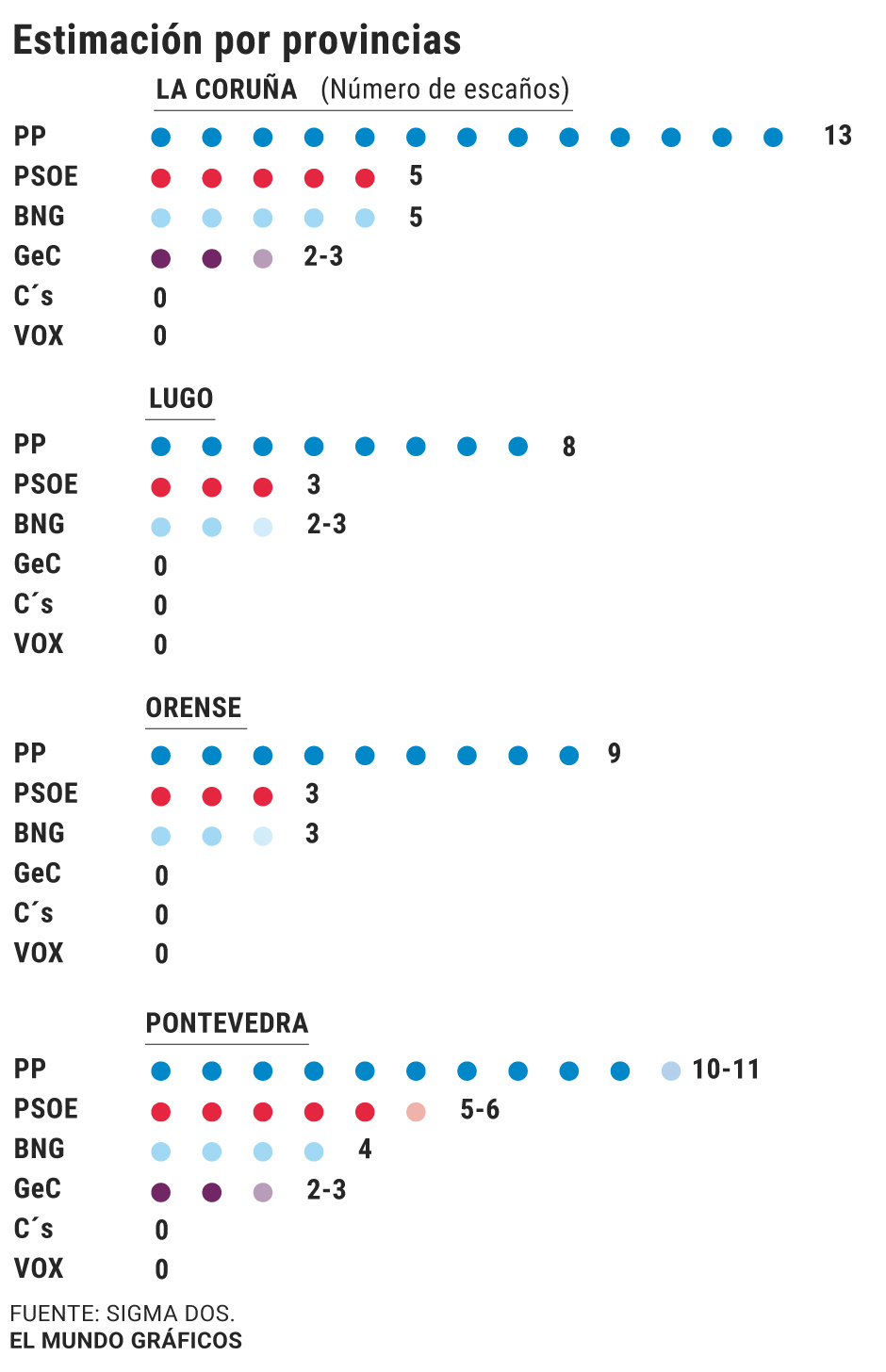 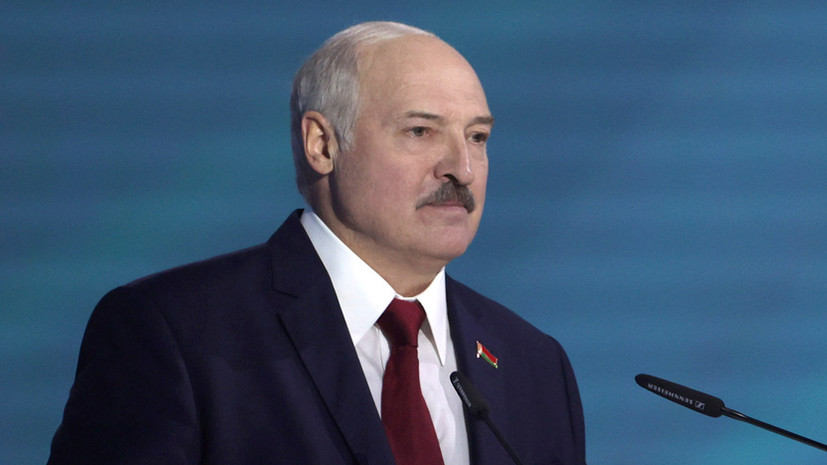 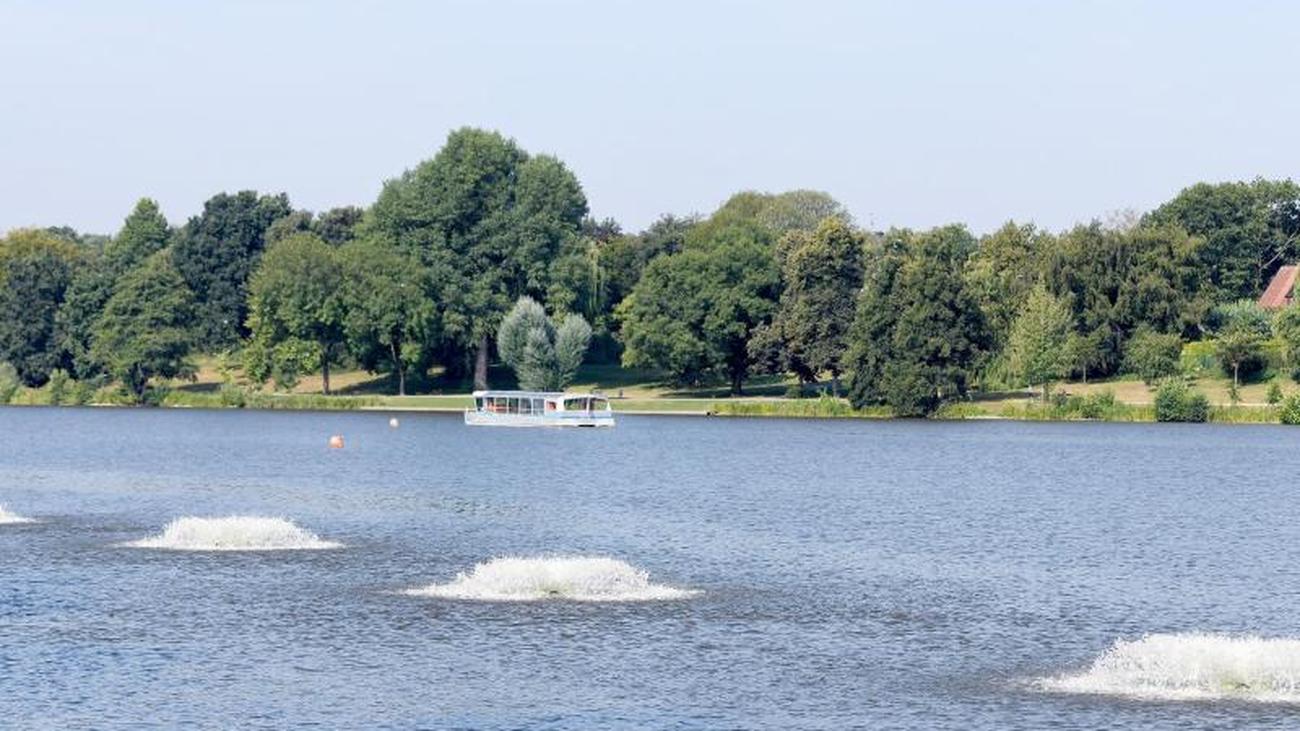 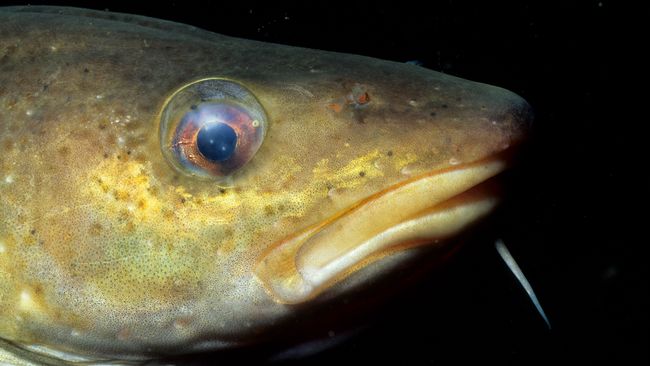