Headlines: solidarity around Bubba Wallace, victim of a racist act

Headlines: solidarity around Bubba Wallace, victim of a racist act NASCAR star Derrell Bubba Wallace greets his audience, June 22, 2020. USA Today sports / John David Mercer via Reuters Text by: Marie Normand Follow Publicity Read more We told you in this press review of the Americas that the only black driver in the Nascar car championship had been the victim of a racist act. Derrell "Bubba" ... 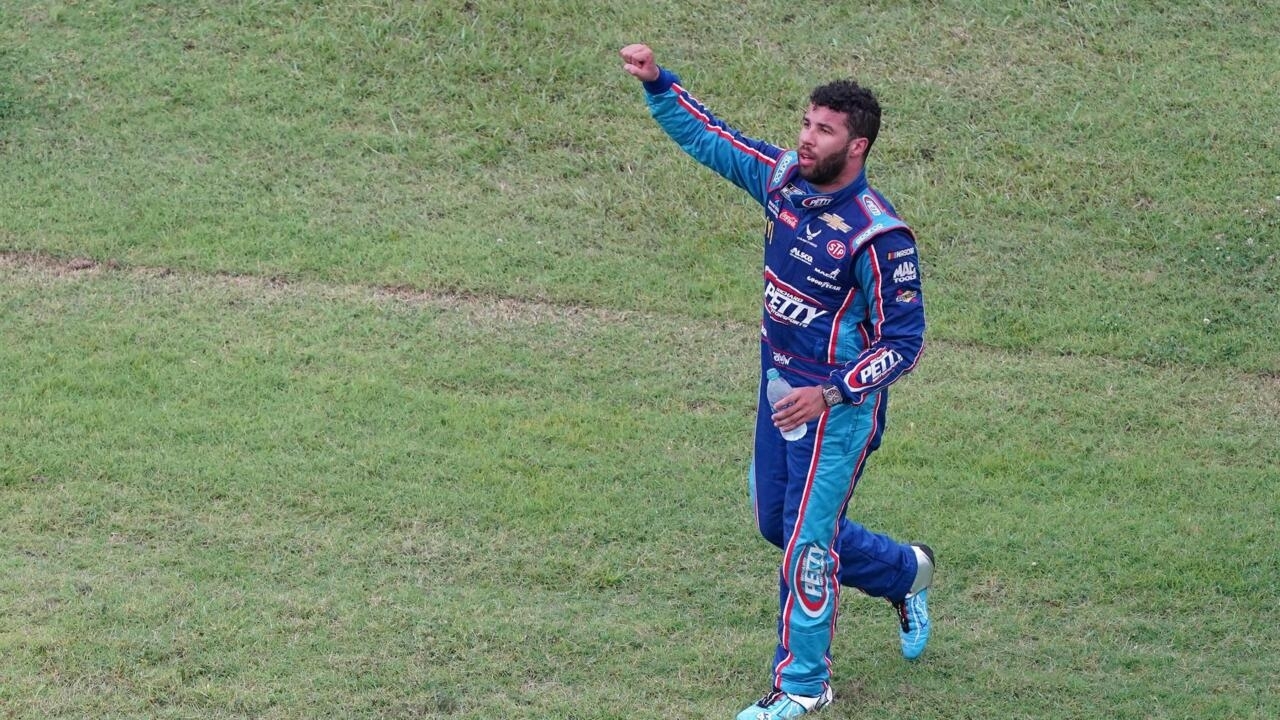 Headlines: solidarity around Bubba Wallace, victim of a racist act

We told you in this press review of the Americas that the only black driver in the Nascar car championship had been the victim of a racist act. Derrell "Bubba" Wallace had found a hanged rope in his garage. Today, as a sign of support, the drivers and mechanics of the other teams escorted his car to the starting line of the Talladega, Alabama circuit, on this first day of the championship. In the images , widely shared on social networks, Bubba Wallace appears moved to tears by this gesture from his competitors.

As a reminder, the driver had fought, among other things, for the Confederate flag to disappear from the circuit and since then, he has been threatened. The FBI announced Monday that it is opening an investigation. For the Canadian daily Globe & Mail , the championship "  must take into account its dark history  ". He must remember that he owed his creation to former Alabama governor George Wallace, who was also a staunch defender of segregation. For the Washington Post , NASCAR must fight against an enemy from the inside, since this garage where the noose was found was not accessible to fans. Only the teams and staff who organize this championship could enter it.

Primary day in Oregon, Kentucky, and especially in New York State where we will be able to measure the balance of power between the left wing and the centrists of the Democratic Party, which the Huffington Post describes as "  aging incumbents  " Seats in the House of Representatives are at stake. Two years ago, the rising star of the left wing, Alexandria Ocasio-Cortez, had created surprise by winning against a party tenor. And AOC - that's his nickname - has made a splash : Politico underlines that “  almost all the Democrats in the House of Representatives of New York and its suburbs are faced with a certain level of threat from the left wing  This Tuesday June 23. But the resistance is there: Alexandria Ocasio-Cortez must for example defend her seat in the House against a former journalist whose campaign was largely funded by the financiers of Wall Street.

The results are not expected immediately. In reality, these polls give an indication of what could happen during the presidential election on November 3. Already in Georgia and Nevada earlier this month, "  some electoral battles were held in abeyance for days while election officials waded through the thousands of postal ballots to be peeled,  " notes the Washington Post . According to the newspaper, more and more people are using it for fear of the coronavirus, which implies a profound transformation of the election process in the United States.

This suggests that we will not have the results of the presidential election night on November 3. The count could take days or even weeks in the hub states. "  An unprecedented test of Americans' confidence in their electoral system  ," writes the Washington Post . While Donald Trump has repeatedly declared that this postal vote could cost him the election, "  few people expect , the newspaper continues, that the president will allay the concerns of voters  ."

Coronavirus : the largely undervalued cases in the United States in March ?

The United States has passed the 120,000 Covid-19 death threshold. Two new members of the Donald Trump campaign team have also tested positive. We learn in the Miami Herald that the disease would have infected 80 times more Americans than the official figures as of March! That month, more than 8.7 million cases went undiagnosed in the United States, according to researchers at Penn State University. They also found that the cases doubled almost twice as fast as initially thought. The modeling "  suggests that at least 9 % of New York's population was infected by the end of March  ".

Elsewhere on the continent, Bolivia is experiencing a new record of contamination. The country has recorded more than 1,100 cases in a single day and 47 additional deaths (820 deaths in all), writes La Razon . But the real numbers would be vastly higher, says Pagina Siete . The Bolivian media explains that the people who died of respiratory failure these last days are buried without being tested and that their relatives are not isolated.

In Cochabamba, for example, "  the crematorium in the general cemetery is no longer able to meet demand  ." In front of this city and the capital La Paz, the Santa Cruz area is the most affected. A department also hit by major floods. On Monday, recounts Los Tiempos , the viral video of a nurse returning home by bicycle through totally flooded streets toured social networks in Bolivia.

Mexico in turn affected by the sand mists

After the Caribbean, it is Mexico's turn to be touched by sand mists, dust from the Sahara. This meteorological phenomenon must hit the southeast of the country, the Yucatan peninsula. No danger for the population, estimates the National Center for the prevention of disasters, quoted by La Razon . He adds that there is "  a relationship between sand" storms "and tropical cyclones  ". A rather beneficial effect since this sand dust would prevent the formation of cyclones and decrease their intensity.