Elisabet, who was in quarantine, returned to representation - followed her birthday parade in sublime loneliness

The Trooping the Color parade traditionally involves the entire royal family, but this year the monarch had to follow the military parade alone on the bridges of Windsor Castle. 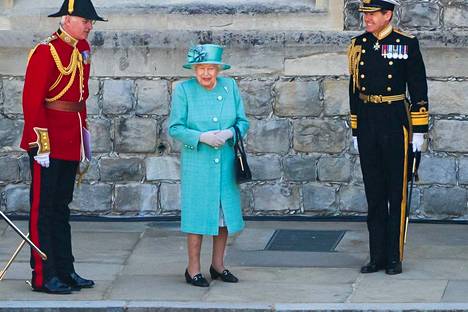 In the UK, Trooping the Color is celebrated today with exceptional arrangements.

This is Queen Elizabeth, 94’s annual birthday party. Although the monarch turns years in April, he will not be celebrated until June under the sign of the Trooping the Color parade.

The spectacular folk festival is traditionally attended by the entire royal family, albeit riding in wagons and blinking from the balcony, but the coronavirus truncated Saturday’s feast with a single throw.

The Queen celebrated her feast in an exceptional way.

This time, the monarch celebrated its anniversary by following a military parade on the bridges of Windsor Castle, a safe distance away. Elisabeth, who was in strict quarantine, was accompanied only by the necessary people, that is, the staff responsible for security.

The military parade staged a private show for the queen.

The monarch dressed faithfully in style with a monochrome outfit.

The monarch, known for its variegated costumes, had today chosen a light blue festive outfit.

Queen Elizabeth has been in voluntary corona quarantine at Windsor Castle since March. This is the longest break from royal duties during Elizabeth’s 68 years as ruler.

In addition to the Trooping the Color celebration, all summer garden parties and other representation duties have been canceled. Even the weekly Sunday service is canceled.

Trooping the Color is traditionally celebrated in a large parade procession.

The distance recommendations were also taken into account by way of example in the party parade. Usually the soldiers marched side by side, but now they stood 1.5 meters apart.

The Queen was so far in her last mission on 9 March, when she attended the annual Commonwealth Service at Westminster Abbey.

According to the Sunday Times, staying inside the four walls could be a hard blow to a queen known to have said that “the people should see me to believe in me”.

During her quarantine, the Queen has given two televised speeches, filmed in Windsor with strict security measures and safety intervals.