China News, June 11 comprehensive report, real-time statistics of Johns Hopkins University in the United States showed that as of 11:33 on June 11, Beijing time, there were more than 7.36 million confirmed cases in the new crown worldwide, and the cumulative deaths exceeded 41.6 Ten thousand cases. The cumulative number of diagnoses in the United States exceeds 2 million; the UN General Assembly... 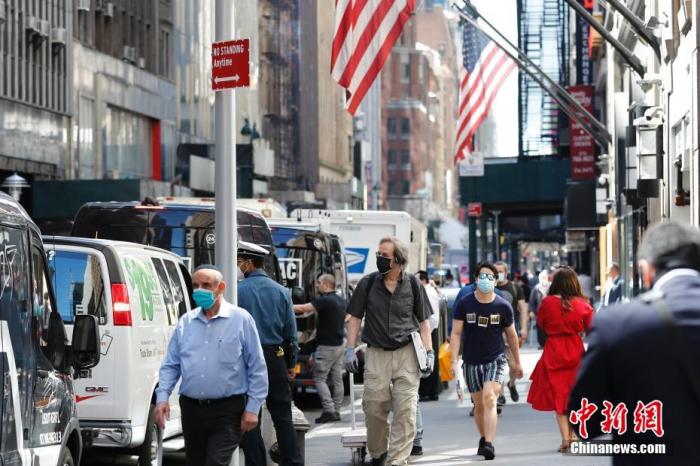 China News, June 11 comprehensive report, real-time statistics of Johns Hopkins University in the United States showed that as of 11:33 on June 11, Beijing time, there were more than 7.36 million confirmed cases in the new crown worldwide, and the cumulative deaths exceeded 41.6 Ten thousand cases. The cumulative number of diagnoses in the United States exceeds 2 million; the UN General Assembly will be held for the first time in the form of video; the epidemic situation in many countries in Europe and Asia continues to improve; the epidemic situation in some countries in the Middle East has rebounded; the cumulative number of diagnoses in Africa exceeds 200,000.

On the 10th, Hong Bopei, the former US ambassador to China, said that his new coronavirus test was positive and showed some typical symptoms and is currently being quarantined.

At present, many states in the United States have relaxed the epidemic prevention restrictions that have been implemented since March. But because there is no vaccine and more people are gathering in public places at the same time, health experts warn that the high case rate in the spring may reappear. Arizona has asked its hospital to initiate an emergency plan. The state health department said: "We know that the new crown is still in our community, and we expect more cases."

In Latin America, Brazil has confirmed more than 770,000 cases. The Organisation for Economic Co-operation and Development released an economic outlook report on the 10th, saying that Brazil's GDP in 2020 will be reduced by at least 7.4%.

WHO: Asymptomatic people can spread the virus

Tan Desai said that at present, what we know is that finding, isolating and detecting people with symptoms, and tracking and isolating their contacts are the most critical ways to stop the spread.

On the same day, the President of the United Nations General Assembly Mohammed Bandy announced in a letter to the UN member states that the relevant measures for epidemic prevention may continue by then, and the UN General Assembly originally scheduled for September will be held for the first time by video.

On June 2, local time, Bournemouth, England, a large number of tourists enjoy the good weather on the beach.

The situation in Europe is gradually improving compared to the US where the epidemic is severe.

According to data released by the Italian Civil Protection Department on the 10th, there were no new deaths in 10 of the 20 regions across the country. As the epidemic continues to improve, Italy will further relax its control measures from June 15.

On the same day, the British Prime Minister Johnson also said that as confirmed cases and deaths of the new crown continue to decline, the government will gradually relax the isolation policy, including allowing some shops and some outdoor attractions in England to open.

Although the epidemic situation slowed down, Germany remained cautious. The German Ministry of Foreign Affairs announced on the 10th that it would extend travel warnings to countries and regions other than EU member states, Schengen countries and the United Kingdom until August 31, and remind the public if there is no Reasons that are absolutely necessary should avoid travel to locations outside the aforementioned countries.

In Japan, in view of the decline in the number of new diagnoses in a single day, the capital Tokyo plans to discuss the lifting of the "Tokyo Alert" on the 11th, which will be lifted at 0:00 local time on the 12th at the earliest.

Malaysia added 2 new confirmed cases on the 10th, which is the lowest number of newly confirmed cases in the country since March 1. In view of the slowdown of the epidemic, the Ministry of Education of Malaysia announced on the same day that it would allow schools to resume classes in stages.

In the Middle East, the epidemic situation in some countries is showing a rebound trend.

Saudi Arabia's Ministry of Health announced on the 10th that the country had added 3,717 new confirmed cases on the same day, the largest increase in a single day since the outbreak, and the fifth consecutive day that Saudi Arabia had more than 3,000 new cases in a single day.

The situation in Iraq is not optimistic. On the 10th, there were 1,146 newly diagnosed cases in the new crown, which increased to a total of 15,414. A spokesman for the country’s health ministry Badr said in a statement that Iraq is still at risk and the number of confirmed cases may continue to increase.

According to the Egyptian Ministry of Health, 38,284 new crown cases have been diagnosed in the country. Egypt is still in the two-week curfew, but on the 10th, Egyptian Minister of Tourism and Cultural Relics Anani said that Egypt is actively preparing to resume tourism for international tourists. (Finish)