The Syrian regime announced that Israeli fighters targeted its military sites near the city of Masyaf in the countryside of Hama in the middle of the country late on Thursday evening, while human rights sources spoke of the deaths and the destruction of weapons depots. 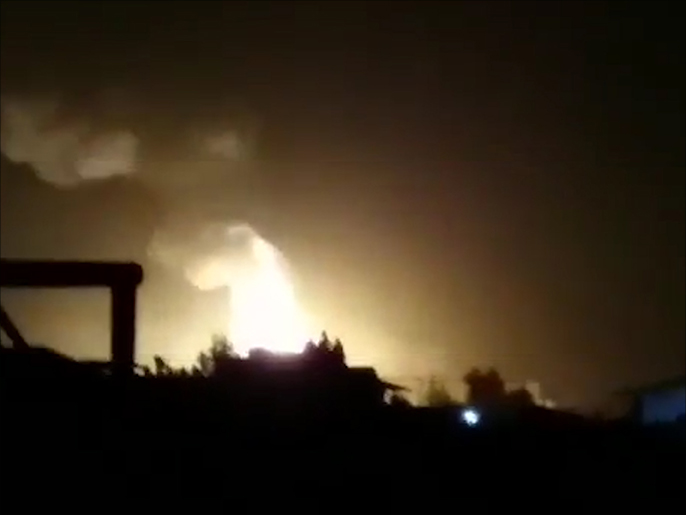 The Syrian regime announced that Israeli fighters targeted its military sites near the city of Masyaf in the central Hama countryside late on Thursday evening, while human rights sources spoke of deaths and the destruction of weapons depots, and indicated that the targeted sites included regime army forces and Iranian militias.

The official Syrian News Agency affiliated with the regime quoted a military source as saying that the Israeli warplanes targeted an unnamed military site in the vicinity of the city of Masyaf, and indicated that the Syrian air defenses had responded to the Israeli bombing and dropped a number of missiles.

According to the source, the "Israeli aggression" launched its attacks from the Lebanese airspace in the Hermel area, and added that the raids had caused material damage without human losses.

For its part, the Syrian Observatory for Human Rights talked about the deaths of at least nine members of the pro-regime forces, including four Syrians, indicating that he does not know whether the dead were from the regime forces or working in the ranks of Iranian forces, amid expectations that the numbers will rise to the presence of wounded in a serious condition .

The French press agency quoted the director of the observatory as saying that the Israeli raids targeted the defense factories and a scientific center for the manufacture of short-range surface-to-surface missiles in Al-Zawy in the Masyaf region in the western Hama countryside.

This is not the first time that the Masyaf region has been the target of Israeli strikes, and the Syrian regime has repeatedly accused Israel of bombing Iranian and other Hezbollah targets in the area. In April of last year, raids in this area left "Iranian fighters dead," according to human rights sources.

Israeli fighters have launched raids on the regime's military sites and Iranian-backed groups from time to time, since the war in Syria began in 2011.

In an interview with the Israeli "Kan 11" channel, Bennett said that "Iran has nothing in Syria, and it entered it during the civil war in it six years ago. Recently, Iranian forces began stationing near the border with Israel, and these forces pose a security and dangerous threat." On the cities of Israel, such as Tel Aviv, Haifa, and others. "

The channel itself also quoted sources in the Ministry of Defense that, for the first time since entering Syria, Tehran began reducing its forces and evacuating its bases there, against the backdrop of the continued Israeli bombing in the recent period.

On February 28, Naftali Bennett, in an interview with the Israeli Jerusalem Post, indicated that Tel Aviv aims to drive Iran out of Syria in the next 12 months.

News/Politics 2019-08-29T03:26:09.466Z
Syria .. Massacre in Idlib countryside and the United Nations confirms the massive destruction caused by the shelling

News/Politics 2020-01-20T10:10:12.365Z
The western countryside of Aleppo under Syrian and Russian fire and warnings of a humanitarian catastrophe in Idlib

News/Politics 2019-08-27T13:30:01.152Z
Victims of regime and Russian raids in Idlib countryside rise and the opposition moves to attack

News/Politics 2019-08-12T17:07:06.577Z
With the intensification of battles between the regime and the opposition .. A new wave of displacement in northern Syria