Colonel Pérez de los Cobos and his service record: from the fight against ETA to the coronavirus through 1-O "Very civil guard". This is defined by those who for five years have shared the first line of work, the first line of "war". Because where Colonel Diego Pérez de los Cobos tanned, his service record was in the Basque Country , in the fight against ETA terrorism, in those years when green uniforms were ETA's priority objective. There, his generation and some previous ones, had to give everything.

Many guards as was pointed out by the left - wing nationalism as "torturers". In fact, he was accused in the Urra case , for which three guards were convicted. He was acquitted.

Within his service record, one of the most outstanding pages was his participation in the device aimed at the release of the prison officer José Antonio Ortega Lara .

Since 2006 he became an advisor to the Ministry of the Interior , at the stage in which Alfredo Pérez Rubalcaba was the head of the Department. Little by little he became one of the closest men to the minister. He became the director of the coordination cabinet of the Secretary of State for Security during the Zapatero government, a position now held by a police commissioner. This post is considered key because he has to act as a liaison and a man of agreement between all the Forces and Bodies of State Security. In addition, it allows him a daily closeness with all those responsible for the Ministry of the Interior. His voice is not that of one more.

So much so that after the departure of the Zapatero government, already with command of the PP in La Moncloa , Pérez de los Cobos retained his post. There were not a few criticisms that this situation aroused within the Armed Institute, recalling the closeness it had had with the person who became the maximum responsible for the PSOE, the deceased Rubalcaba.

His last name is full of responsibility, his brother Francisco came to be at the head of the Constitutional Court.

With the different interior ministers of the PP, he has maintained the status of adviser / counselor on all security issues. His position became so relevant and so consensual that it was the name chosen to direct the entire police operation that theoretically had to stop the illegal 1-O referendum in Catalonia . His testimony in court was key to the Supreme Court ruling on the process . Now, in the trial against the former head of the Mossos, Josep Lluís Trapero has also played an essential role.

Since 2018, with the arrival of the new Executive of Pedro Sánchez, he went on to head the Madrid Command , from which he has now been removed, amid a strong controversy over the extensive deployment of security in the residence of Pablo Iglesias and Irene Montero .

Before, he had to coordinate the security deployment of the Civil Guard in the work of transferring the mortal remains of Franco from the Valle de los Caídos.

Now, under his responsibility, he was working on the investigations opened by the Plaza de Castilla courts for the 8-M. Its members of the Judicial Police had sent reports that left Fernando Simón, the face of the Government in the coronavirus crisis, in a delicate situation.

He is not the first colonel to be dismissed by Grande-Marlaska since arriving at the Ministry. Another of the most controversial decisions was the dismissal of the colonel who was in charge of the Central Operational Unit, UCO , and who carried out a large part of the corruption investigations, Manuel Sánchez Corbí , also due to loss of confidence. News/Politics 2020-06-23T18:15:27.046Z
Colonel Diego Pérez de los Cobos appeals his dismissal as head of the Madrid Civil Guard Command before the Ministry of the Interior 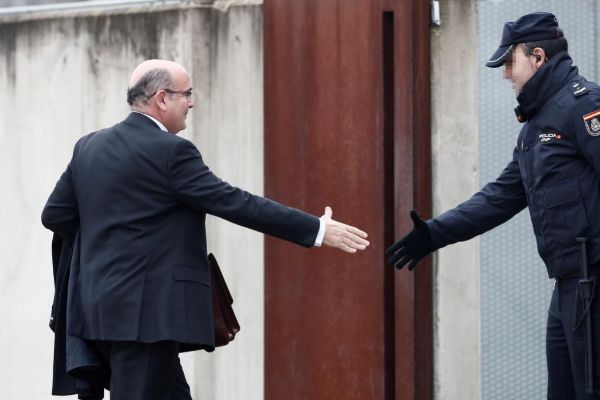