An incomprehensible giant object hovered from the sky to Vitostie - Janne, 17, photographed a mystery matter, the Air Force and the Finnish Meteorological Institute spread their hands

An unknown object fell from the sky, which at least the Finnish Meteorological Institute or the Air Force do not recognize as its own. 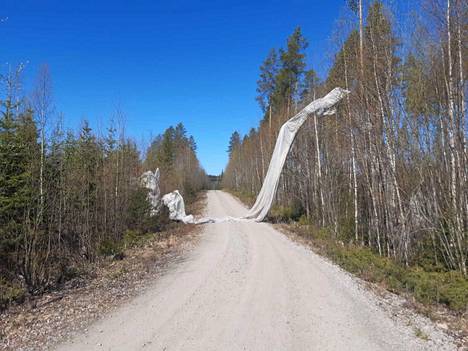 On Friday morning, south of Kuopio, a rather strange moment was experienced along the five roads. 17-year-old Janne was driving with her father in a car towards Kuopio as her gaze caught the sky.

Namely, a strange, white thing fluttered down from the sky, with a long flowing “tail” and something heavy attached as well. Like a huge roll of toilet paper.

Dad quickly parked the car by the roadside. Janne picked up the phone and started filming. Then the duo just wondered.

- There was nothing to think about. That’s how exciting it was, Janne says.

Father and son fumbled about the object falling, and when it hit the ground, they drove to see what a weird thing it was. A long-shaped white cloth had descended on the adjoining dirt road and partly on the trees bordering it. Janne describes the material as “filter cloth-like”.

The object eventually landed on the dirt road.

Janne had not noticed that an airplane or helicopter had flown before the object fell in the sky. It appeared out of nowhere. Father and son had no idea what was really falling from the sky.

- Could this be a goal used by the Defense Forces in exercises? Importing suggests.

That, too, ends in a short thread. After seeing the video, Risto Hyvärinen, the information secretary of the Karelian Air Force, states that the object does not appear to be Air Force material and he therefore does not believe that the matter is in any way related to their activities.

So what is it? You still need to ask Air Navigation Services Finland (ANS Finland). ANS Finland is responsible for managing the use of Finnish airspace and for route and air navigation services at 22 airports in Finland.

ANS Finland is also researching video, but no one has to give a sensible answer to the question: What really drops from the sky and why?

Help Ilta-Sanomat solve the mystery. Comment below on your own suggestion!