Clowns with colorful costumes jogging with joy, and children's laughs rise from the windows of homes in Khan Yunis in the southern Gaza Strip, to undermine the silence that these streets have experienced and the lack of movement since the start of preventive measures to combat the outbreak of the new Corona virus (Covid-19) in the sector.

Four young men wore the clowns and dolls clothes, and set out between the alleys of the cities of Rafah and Khan Yunis in the southern Gaza Strip, in a youth initiative and a personal effort to spread joy among children who got tired of sitting at home after life stopped completely Hope you fight boredom and encourage prevention.

And as soon as the children heard the clowns calling, they gathered until they gathered through the windows to watch the entertainment shows and waved the clowns and dolls. Not only did the children, the shows also received the approval of the families who did not miss any moment after days of home stone.

Entertainment and tips
The coordinator of the "Colors of Entertainment" team responsible for the initiative, Fayez Muhareb, said that his team, since the beginning of the preventive measures and the disruption of schools, is thinking of a way to entertain children and sow joy in the streets that have become empty, until they came up with the idea of ​​"the clowns tour."

The team consists of four unemployed youths, who decided on a personal initiative and a sense of social responsibility to roam the streets of the Gaza Strip to entertain children, where they carried out five shows in the cities of Khan Yunis and Rafah in the southern Gaza Strip, at a time when they are planning their next shows in the central area and Gaza City.

A warrior explained to Al-Jazeera Net that the team did not take any step except before consulting the competent authorities and taking all preventive measures in order to preserve the safety of the team and the citizens, stressing the great interaction and great joy that they were met to the point that the children did not want the offers to end.

The team's offerings were not limited to entertainment only, but they also gave many tips and advice to children and families on the importance of personal hygiene and staying at home, and the importance of taking all preventive measures for safety and not being infected with the Corona virus, which has become a terror in the whole world.

Despite the difficult economic conditions experienced by the members of the squad, they insisted on buying some simple gifts to make the children happy, calling on all civil institutions to join their campaign and expand it to reach all areas in the Gaza Strip.

"One of the best types of awareness that accompanies smiling and playing, and we know very well that children are always attracted to the thing that they love and make them happy, so we hope that we have contributed even a little in the war on the Corona virus and its prevention in the Gaza Strip," Muhareb said.

Since the beginning of the global crisis, with the spread of the Corona epidemic, many distinct and creative models have emerged in the Gaza Strip to combat the epidemic and encourage prevention, ranging from medical, engineering and recreational, all aimed at maintaining the sector free of corona.

The Gaza Strip has been living under a suffocating Israeli siege since 2007, as the occupation authorities prevent many medical supplies from entering the Strip, according to the Ministry of Health, which has led to a significant deterioration of health and humanitarian conditions.

As of Thursday, Palestine had recorded 263 cases of Coronavirus, including 12 in the Strip and the rest in the West Bank, according to official data. 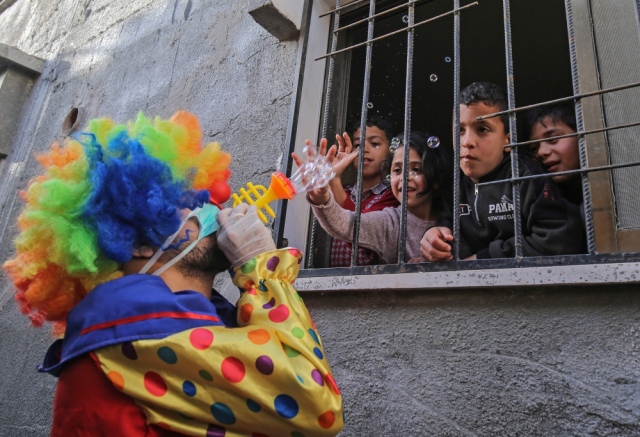