Mexico slows and blows the dreams of 2,000 people from the Migrant Caravan: "We are human beings and not animals"

A girl cannot stop an inconsolable crying: "my brothers of 9 and 14 are missing." His mother who can not stop crying says that her children escaped 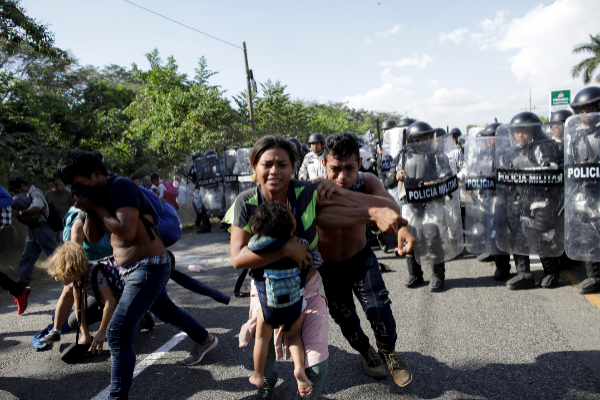 A girl cannot stop an inconsolable crying: "my brothers of 9 and 14 are missing." His mother who can not stop crying says that her children escaped her hands running through bushes when the National Guard and the Army beat and threw tear gas mercilessly to the more than 2,000 people who made up the self-styled 'Migrant Caravan of the Hope'. Mexico had no compassion either with the children, or with the babies that accompanied their fathers and mothers and that this morning they had managed to penetrate the country through one of the many blind spots that exist on the border with Guatemala, specifically, one kilometer and a half north of the city of Tecún Umán, where they spent the night in shelters and on the street in recent days.

For more than half an hour, no one helped mother and daughter who were hugging crying and screaming that they couldn't find Milton and Harold, who fled in terror from their mother's hand when they heard how National Guard agents were approaching by hitting right-handed and sinister no matter if there were children around.

Thus, another minor from Guatemala had to be assisted by a member of Civil Protection, after he had trouble breathing after inhaling the gases used by the National Guard against an unarmed population that had not eaten food for many hours and after walking Almost 20 kilometers. His father tries to get the teenager up and resigned to being surrounded by agents of the National Guard and the Army says: "we go to Guatemala. We are from there and there we go," thus resigning himself to orderly detention by the Government of Manuel López Obrador against those who until now integrated the Migrant Caravan that departed on January 14 from the Honduran city of San Pedro Sula.

It didn't help that the migrants grabbed their arms and shouted "Peace, peace, peace" after being surrounded by all flanks by members of the National Guard and the Army that the only alternative they were given to avoid an arrest was to flee by agricultural extensions, as do tens of them before the police repression.

In this way, the Government of Mexico ended the Migrant Caravan that had already tried a few days ago to cross the Suchiate River, located between the border cities of Tecún Umán (Guatemala) and Ciudad Hidalgo (Mexico). That day, the National Guard also used gases against the members of the Migrant Caravan, who had to retreat and return to Guatemala again to avoid being arrested.

Their freedom was short-lived, although enough to enter Mexico irregularly without absolutely anyone preventing it. The day in which the Migrant Caravan disintegrated began at four in the morning, when they got up from the two hostels in Tecún Umán, in order to go to Mexico. Before starting the march, the migrants made a prayer so that "we have no problems and God clears the ground of obstacles." An hour later, they began to walk without knowing most of the direction of the Caravan, until a kilometer and a half after Tecún Umán, they had to cross a river that covered up to the waist. With their belongings in their heads and carrying their babies and young children as they could, the migrants managed to reach the other shore by entering Mexican territory and without encountering any opposition from the Government.

"WE ARE NOT CRIMES"

It was the only moment of euphoria in the whole day: "We are happy because we could pass without any setback and asking God to keep it that way," said Ronald Villatoro, a Honduran migrant who recalled that "we have been fleeing from a country where we don't have security and yes a lot of poverty. " In addition, he stressed that "we are not criminals, but we are looking for a better future for our children."

Upon arrival in Mexico, the Migrant Caravan has made its way to Tapachula, 35 kilometers from Ciudad Hidalgo, although in the middle of the journey it has made a stop in Frontera Hidalgo to rest and so that migrants could fill a paper with the in order to request refugee status. In the middle of the afternoon, a person in charge of the National Institute of Migration has arrived at the camp to highlight before the media that the position of the López Obrador Government has not changed one iota: "we are committed to an orderly and regulated migration".

After several hours of calm, in the middle of the road two large ranks of National Guard troops have been escorted by hundreds of soldiers who have made migrants nervous to the point that they have lowered many of them to the road to defend Your right to emigrate in peace. However, the National Guard has progressed step by step to a few meters from the group of migrants who after being overcome by the police force have chosen to disperse to the race, although all the surrounding areas were completely surrounded creating an impassable fence around the caravan.

To get them delivered without resisting, they have released gases affecting the eyes and throat of migrants, including children who could not stop crying in the face of the violence that was perpetrated against the Migrant Caravan. "I am afraid," said a girl tearfully grabbed by the hand of her parents who were escorted to the road, where they were put in the hands of the National Migration Institute that introduced migrants in several buses. At that moment , the Caravan ended and with it the dream of thousands of people to fulfill their American dream of living in the US fleeing the endemic violence and misery that plague Honduras, Guatemala and El Salvador.

"Please, we are starving. That is why we are leaving Honduras," a woman cried when she was escorted by the National Guard to a bus that took her to the 21st Century Migration Station in Tapachula where she will remain detained along with the rest of migrants until their immigration status is regularized, which in a vast majority of cases will result in deportation to their country of origin. "We are human beings and not animals," cried another woman, while several people asked loudly that "where are the Human Rights organizations?".

Despite the cries of the migrants who came to say "I don't want to go back to Honduras," the police siege barely allowed the caravan members to flee, crying most of them headed towards some of the buses. Meanwhile, a few took advantage of the chaos generated by the intervention of law enforcement to flee the race through the surrounding agricultural fields.

"ALL THE GUILT HAS IT DONALD TRUMP"

One of them, originally from El Salvador, spoke with ELMUNDO while he was hiding in the bushes with four other migrants: "All the fault is Donald Trump and we will continue hard with the Caravan until we arrive in the USA and if we return we will come again, "he warned. On the other hand, he said that "we are three countries that are emigrating with the American dream to prosper and help the family, but the authorities did not leave us and responded aggressively and beat us women and children without respecting anything."

He also announced that "the plan is to be hidden until we can have the opportunity to go out and follow our path to pure mountain, without eating, without water and without anything as if we were criminals, but we are not."

Precisely, the National Guard, the army and the National Institute of Migration began the search for migrants who had not been detained, including several families with young children who managed to circumvent the police fence. Before the transfer of migrants on buses to a detention center was completed, one of them began to play a song with a guitar in protest of police and army action, considering that "it was not necessary for them to act that way. ". "Crossing borders, I have reached this beautiful nation, Mexico. I am a catracho migrant who is only looking for work to overcome, Mexican brothers I want you to take the step to move forward. We are an alert step in case we want to stop in some cases, we go in peace and hope that migra is not going to bother, "he recited.

When the entire area was empty, a migrant was frightened by the continuous patrolling of the vans of the National Migration Institute in search of those who had escaped arrest. "I already did the impossible to get to Tijuana where I can work, so now I will do my best to achieve it," he said tearfully before getting on a motorcycle that stopped to take him and continue his journey alone and already without the existence of the Migrant Caravan. 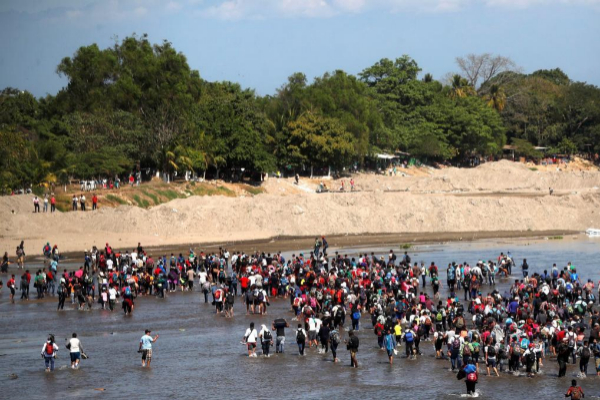 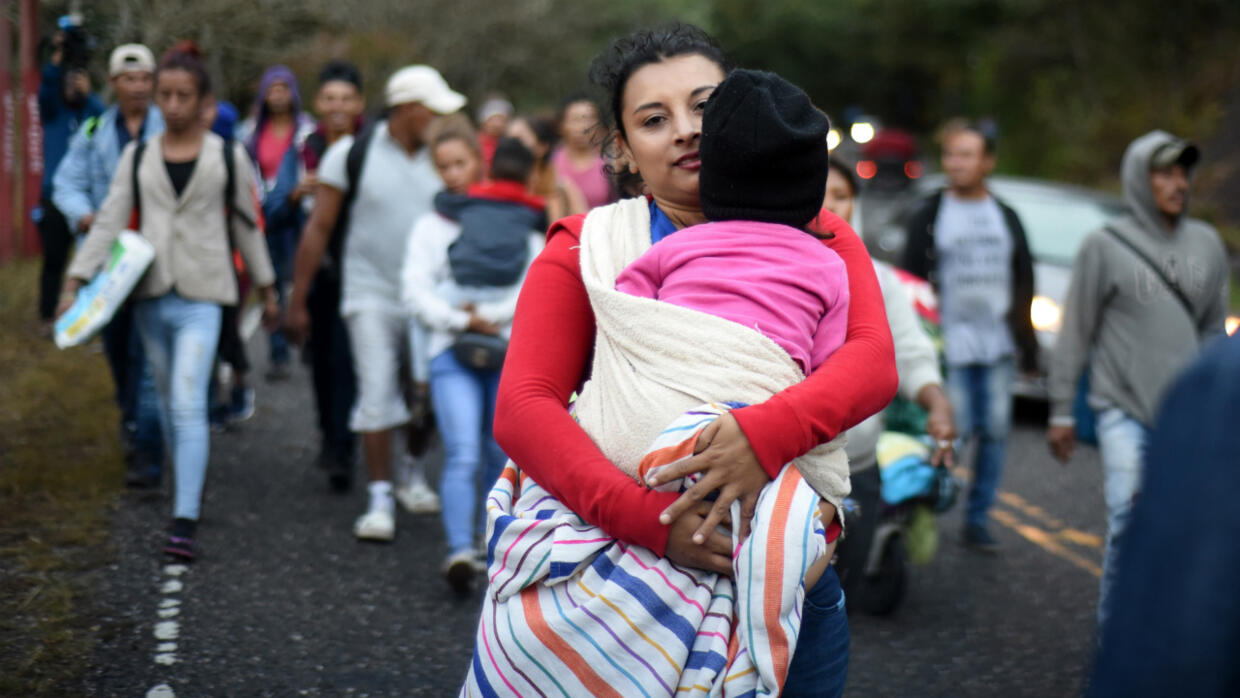 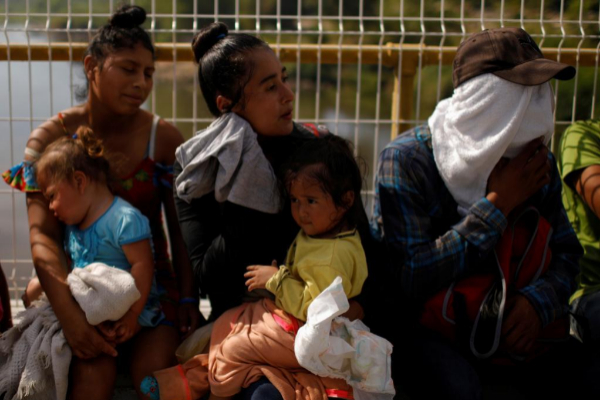 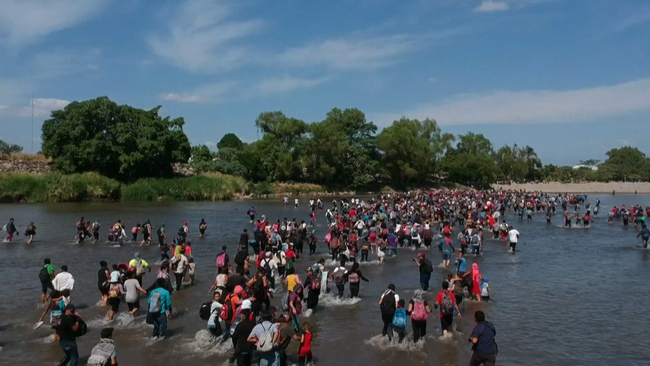 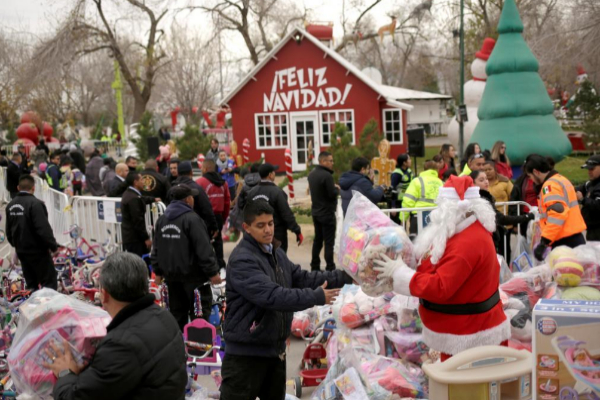 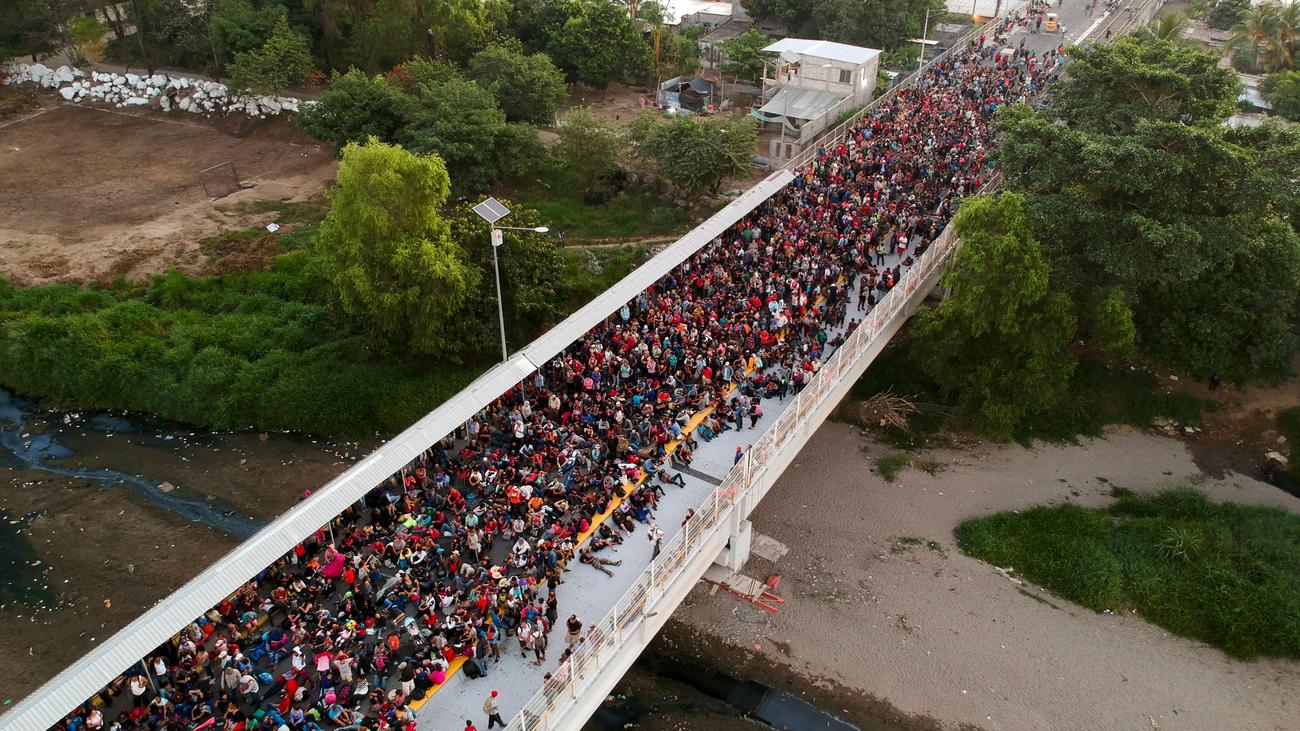 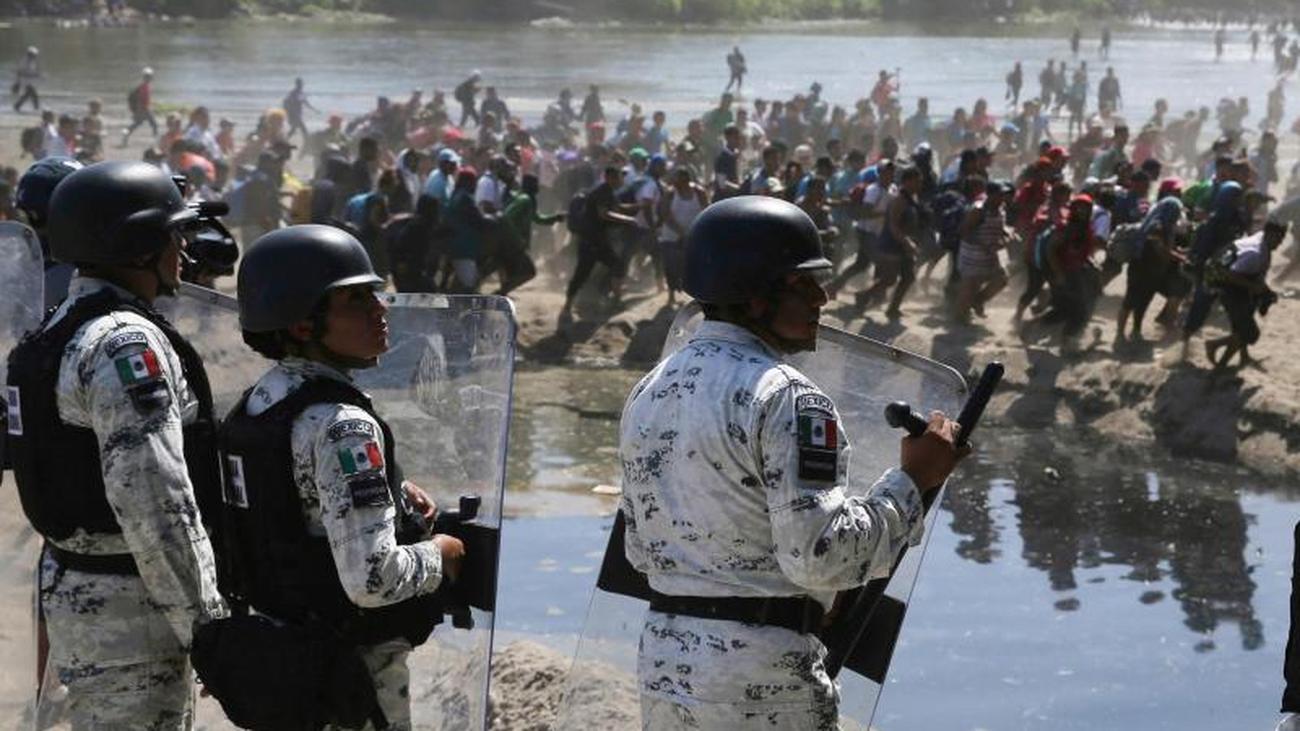 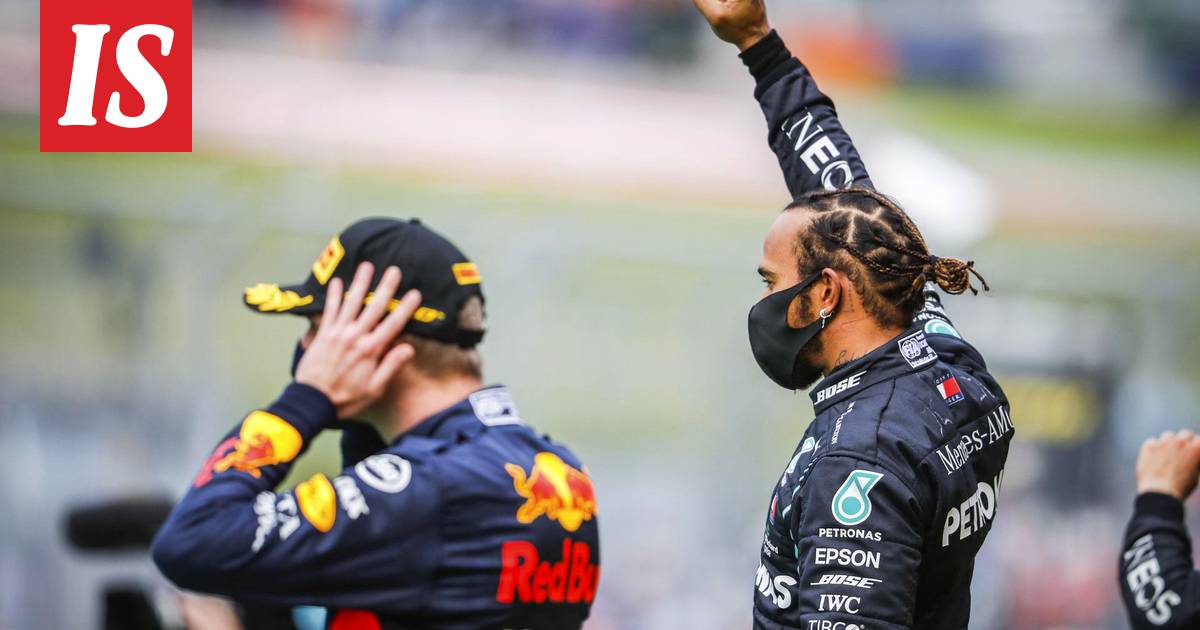 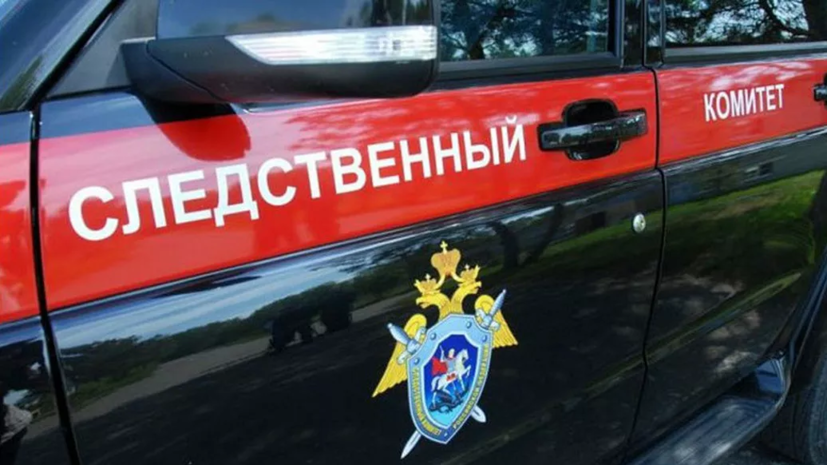 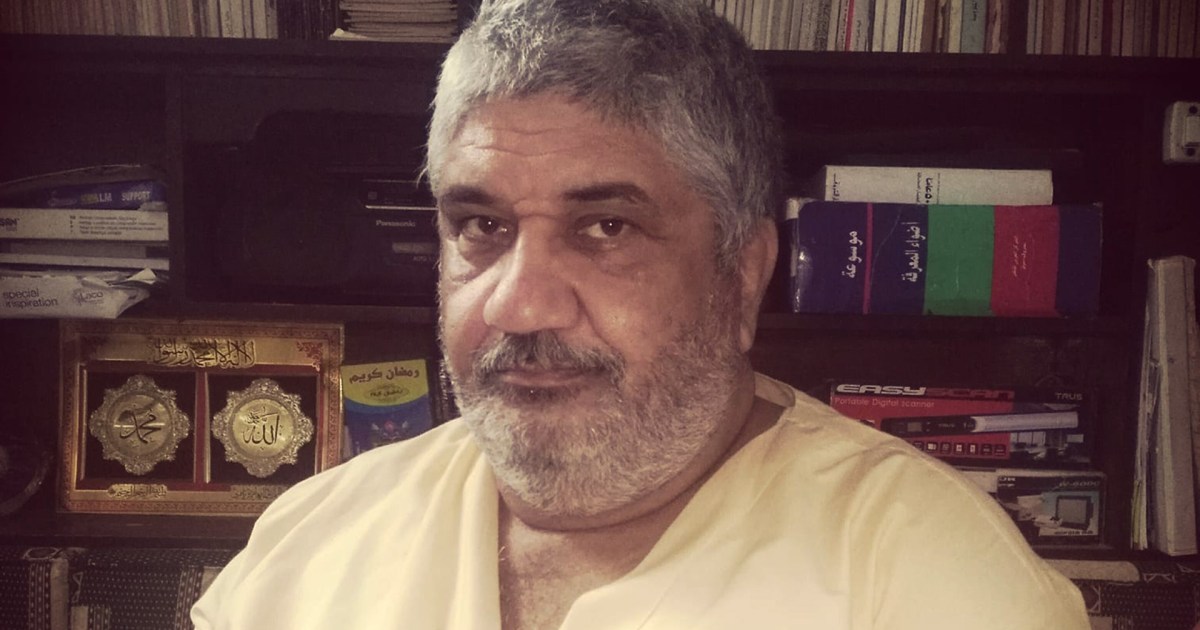