More than 100 hectares of land flooded outside Säffle

The water level in the Glafsfjord is about to stabilize, but the level in Byälven down towards Säffle continues to rise and now landowners along the river are worried about whether the land walls that will protect the arable land will really hold. "Here the cows usually go in the summer, but only here in Gillberga are 100 hectares of pasture and ten hectares of arable land flooded," says Ola Axelsson, president of LRF Säffle Norra. 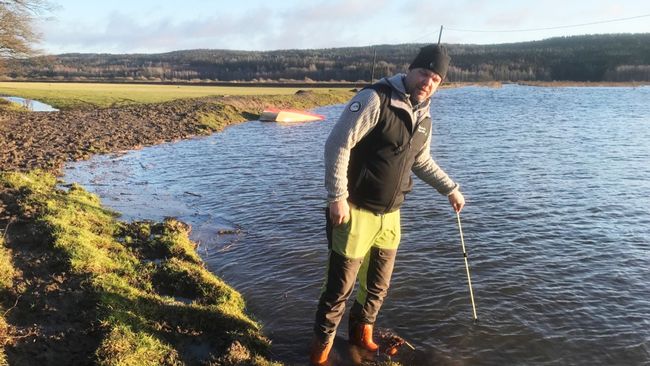 Ola Axelsson is also with LRF Säffle municipality group. He shows where the pasture lies and points to something that looks more like a lake.

He is one of the landowners along the river who now wants the lock in Säffle to be opened to relieve the pressure in the river, but so far the Rescue Service wants to await an opening of the lock.

- We know that several property owners along the river have problems and are worried, but the lock in Säffle is not built for flowing water, and we do not decide to open it until the damage the water does along the river is greater than the damage that can be caused lock, says Mattias Larsson, rescue manager at Arvika and Säffle.

- Of course, it depends on how much rain we get in the coming days, but I do not think it will calm down here until the earliest Christmas, says Ola Axelsson.